Antalya in November – is it worth going? Weather, water temperature, how to dress, is it possible to swim? Prices in hotels and on excursions in 2023. What to see in Antalya at the end of autumn, things to do and where to go – found out good Time for Trip.

Antalya is the top beach resort in Turkey. In other successful years, in terms of the size of the foreign audience, it overtakes the recognized tourist centers of Europe.

Not all, of course: London, Paris, the same Rome, without much tension, retain superiority in the number of guests received from abroad. But here, for example, Amsterdam or Prague clearly no longer feel safe.

However, the colony of foreigners begins to grow rapidly on the shores of the Antalya Riviera, starting around May. And no later than in October, the expressed interest in recreation in the south of the Mediterranean Sea fades to nothing.

Does this mean that in November Antalya is completely unclaimed? And moreover – in the climatic sense it is unpromising?

By no means! We would call it a destination for aesthetes and connoisseurs. Those who have already rested on the sea in Turkey more than once. And in principle, can afford themselves to go on vacation not only to swim and sunbathe.

That is, in general, they are able to move these recreations from first to second place. Since the late autumn in this region doesn’t provoke a long rest on the beach.

Weather in Antalya in November

more conducive to contemplation and relaxation than to active, stormy pastime. And where, tell us, is it noisy to spend time here, if many discos as well as nightclubs have curtailed their activities until spring? The local water park also stopped working – there are so few customers that it is simply unprofitable to keep it open.

But overall it’s good! Since the general weather mood is calming – at least in early November, the air temperature in Antalya during the day doesn’t tend to leave the corridor of + 22-25 °C.

The nights are colder. But, as recent practice shows, in 2021 and after sunset, the atmosphere cooled down to a maximum of +17 °C.

Towards the end of November, Antalya usually observes a slight cooling. Sufficient, however, to ensure that some vacationers were drawn to the exit. Well, or, at least, moved south – in Alanya, the end of autumn is noticeably warmer.

One way or another, but after the mid of the month, the air here during the day hardly warms up to + 20-21 °C. And thermometers begin to be lazy, at every opportunity, stopping at + 17-18 °C.

The reviews notice that this is probably happening in a dense shadow. Since in the sun – clear days here in the usual majority – you can literally fry.

In any case, it is better to take sunscreen and some other useful things with you to the sea in Turkey anyway. So that upon arrival you do not waste valuable time looking for what you need in local stores.

It will rain moderately when compared with the November realities in Europe: at most 4-6 times a month. And the sun is shining bright! After all, the duration of daylight hours, even on the threshold of the calendar winter, is about 10 hours.

Reaches acceptable values ​​throughout the whole month. And it is in no hurry to cool down, moving along a very gentle downward curve. If at the beginning of November the sea in Antalya is warmed up to + 23-24 °C, then at its end – only up to + 20-21 °C.

Someone say that such conditions are suitable only for seasoned people. But we argue that 80 percent of German tourists arriving in Turkey can be classified as such.

As they not inclined even in summer to swim in the cool North Sea. And naturally compensate it on the more southern shores.

If you like more warm water, find a hotel with a heated pool. Fortunately, they are in the majority in Antalya!

From the foregoing, it indisputably follows that the set of clothes taken with you must be solid. After all, during the day you will be happy to walk in tops and skirts, t-shirts and shorts. And in the evening, put on a sweatshirt or jacket with pleasure. Yes, and fasten, you have to think.

A visit to the mountainous regions, not even a climb to Tahtali, but, say, a walk to the ruins of Termessos, in November will require the presence of a jacket with a hood. And, of course, trousers complete with comfortable trekking shoes.

The same or even warmer clothes will require for those who are going from Antalya to Cappadocia. Where in late autumn is usually above zero temperature. But sometimes it can snow.

The abundance of inexpensive accommodation should only spur your desire to visit Antalya in early November. Or a little later – discounts will be more significant.

Pay attention to hotels and apartments in the old town, Kaleici – at this time of the year even a person with a modest income can afford to stay there. What do you say, for example, about Mavi Avlu – Old town apartments, where a double room costs from 60 € per night?

The White Garden Hotel-Adult Only proposal also looks very interesting. As its interiors and views from the terrace seem to be praised by every first guest.

Around 30-35 € will cost an introductory walk around the city, accompanied by a guide. For €40 per person you can explore the incredibly beautiful Köprülü National Park. Or go to Perge, Side and Aspendos.

It is obvious that tourists arriving in Antalya and on the edge of autumn intend to devote enough attention and time to the beach and the sea. But they will not focus solely on this type of recreation. 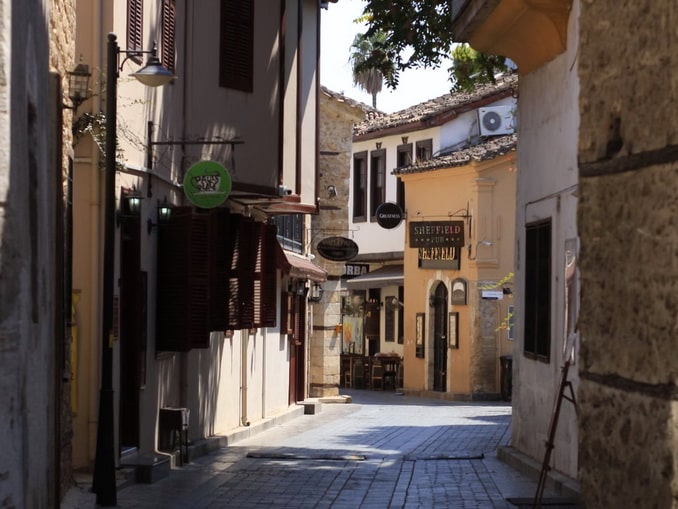 Because the weather here at this time of the year is sometimes completely unsuitable for a long stay on the coast. And also because of the feeling that it is simply stupid not to take advantage of the great opportunity to visit main attractions in Antalya and the surrounding area outside the tourist season. And the crowds that accompany it.

We recommend that vacationers with children pay attention to universal entertainment. Like chic local oceanarium, amusement park and zoo.

A visit to each of the establishments by a large company will not be a very cheap event. After all, for example, only an adult ticket to the aquarium in 2022 costs about 200 lira.

On the other hand, an independent walk through the old city, Kaleici, will not require expenses. You can see both authentic houses and the symbol of the city, the well-preserved Emperor Hadrian’s Gate.

At the same time, you will go around the port, climb the fortress walls and … shopping a little. Well, at least buy gifts for friends – how not to bring souvenirs from Turkey? Or at least sweets?

The Roman tower Hidirlik at the other end of the old city was opened in 2022 after reconstruction. At its top there is also an observation platform with excellent views.

To the south lies the main local park – Karaalioglu. It is unlikely that tourists who are always concerned about the lack of time will be interested in it. But citizens who are not in a hurry are ready to sit here on the shore for hours.

After all, the opening views of the Mediterranean Sea plunge even extremely realistic gentlemen into a blissful state.

Antalya has a cable car that takes everyone to a height of 600 meters. Incredibly good panoramas open from the observation deck. In addition, they allow to assess the scale of the resort.

At the top there is an equipped park for recreation with a barbecue area.

It is better to see the Duden waterfalls in the park of the same name during a boat trip. After all, from the side of the sea, water streams collapsing from the cliff look especially impressive.

A rented or own car – traveling around Turkey by mashine is now in vogue – will diversify your leisure time by visiting the ancient city of Phaselis, perched on the shore of a very cozy bay.

As well as the ancient policy of Olympos on the slope of Mount Tahtali. Or abandoned even by archaeologists Termessos. One climb to which will already make not the most athletic people proud of themselves.

Just 15 km northeast, a little further than the airport, are the ruins of the large ancient city of Perge. Founded as if immediately after the end of the Trojan War. That is, in the second millennium BC.

Not so old and therefore much better preserved is the amphitheater in Aspendos, which is 45 km east of the resort. During the summer season, opera performances and concerts are held here. In November, on the other hand, you will be able to appreciate the grandeur and scale of the structure without interference and competitors.

The church of St. Nicholas in Demre, the amphitheater and the Lycian tombs in Mir are the easiest to see along with a guided tour. Like the sunken city on the island of Kekova.

Also we will advise to visit in November Cappadocia. By the tour or – its’s more better – on your own.

In order not to be constrained by a two-day visit format. Because it is difficult to enjoy the beauty of this amazing region even in a week!

Turkey in November – is it worth going? Weather, water temperature, is it possible to swim, are there many tourists in Istanbul and Bodrum, Antalya, Side and Cappadocia? Prices 2022, what to do and what […]

Turkey in March – is it worth visiting, where is it warmer? Weather, air and water temperature, prices 2023, how to dress, where is it possible to swim? What to do in Turkey in early […]