When is the best time to visit Istanbul? In terms of weather, prices, number of tourists? Features of the seasons, how to dress, air and water temperature. What can you do in Istanbul in spring and summer, autumn and winter, where to go – interested goodTimeforTrip.

Istanbul is a big city and has been a very tourist place for a long time. However, in the eyes of foreigners, until recently, it was more an application to a beach holiday than an independent destination.

Tourists usually came here for a day or two when they started to get bored on the beaches of Antalya or Bodrum. Run at a brisk pace along the central streets, visit the palaces and gardens of Topkapi under the tongue twister of a guide, take a boat ride along the Bosphorus… and immediately go back. To the measured rhythm of relaxing on or near the beach.

Someone, of course, came to the former Constantinople and purposefully. And before that, he scrupulously studied the available sights and weather conditions, made routes and far-reaching plans.

In a word, figured out when it is better to go to Istanbul in order to recharge my impressions to the maximum. At the same time, without dissolving into the tourist crowds and splurging on tickets and hotels.

But the coronavirus pandemic, as it is already becoming clear today, has changed the established trend. Turning Istanbul from just a popular place among day-trippers into a self-sufficient destination. In demand both in the high summer season and beyond – the local weather in May is so good that month can easily be called the best time to travel to Istanbul.

In addition, it suddenly became clear that winter in the Turkish metropolis is distinguished by quite decent climatic conditions. And therefore, the New Year’s Eve in Istanbul – which people did not even think about in the era of open Paris and Barcelona, Rome and Venice – has become a very interesting and promising experience.

Having announced the birth of an almost new direction with a multimillion potential, we will proceed to the presentation of more pragmatic matters. That is, facts! 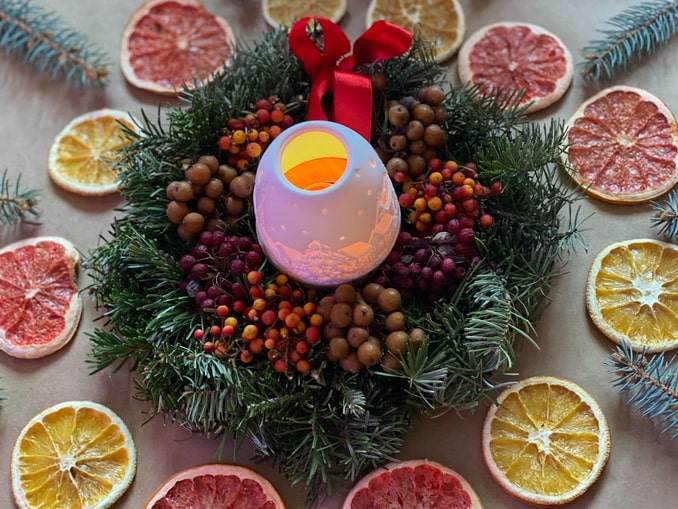 It’s time to look at the map and understand that Istanbul is stationed at 41 degrees north latitude. That is, a little south of Rome. And much closer to the equator than such popular even in the cold months destinations as London and Paris, Munich and Milan, other Florences…

That promises you, if not a carefree existence in an open jacket, then still good (by the standards of a Northerner, of course) weather conditions. And gives a lot of opportunities for an intriguing pastime.

Starting from excursions in the old town and ending with trips around the neighborhood: both near and very far. Yes, you probably need to rent a car for this, but so what – it’s not too ruinous deal!

If you like, of course, to wander around the streets and sit for a long time looking at the water or the sky. Know a lot about visiting not only famous museums, but seemingly nondescript structures. And at the same time, you are easy to lift – after all, a lot of places can be visited near Istanbul for a day.

Usually meteorological forecasts promise Istanbul in December +7-17 degrees Celsius in the daytime. About 70-90 mm of precipitation in the form of rain and even sleet. Plus strong winds, literally attacking the easily dressed tourist with passion.

At the same time, there are not too many sunny days – 7-8 for the whole month. And in general, you have the right to doubt the expediency of the trip. Moreover, in December you can go to Antalya. Where the heat will be noticeably more…

But we advise you to take a chance! Since Christmas in Istanbul has become a notable holiday today. And later, in January, the city becomes less attractive.

After all, the fuse, communicated to the city in the warm autumn, is coming to naught! And the energy of the residents splashes out during the New Year holidays without a trace.

The snow that fell at night no longer tends to melt by lunchtime. And air temperatures are not prone to unrestrained optimism and try not to go far beyond +10 °C.

The length of daylight on paper increases. But it is more difficult to feel it than at the beginning of winter – the sun diligently hides in a foggy haze.

As for prices, the January is the cheapest time to visit Istanbul. Be sure – they will please the wallet of even a slightly earning traveler. Except for the post-New Year dates.

In December and January, you can grab a room at the popular Basileus Hotel in Fatih district (7-10 minutes to Sultanahmet Square) for only 30-35 € per night. This is for two people and with a refundable rate!

Cozy, centrally located, has an excellent view terrace and Angel’s Home Hotel. In winter, it usually also offers a discount of 40-50% of standard rates.

In theory, the final month of winter is not bad here. And many even consider it as “almost spring”.

But in fact, Istanbul February is not much different from January. Although in most cases it does not shock residents and foreigners with a drop in air temperatures to near-zero levels.

Against the background of frequent rains, strong winds and a small number of clear days, it still does not look very optimistic. But those who stay in the historical center of Istanbul will be able to turn such a minus into a plus.

Because they will simply move from the mosque to the museum, and from there to the palace or on board a pleasure boat. 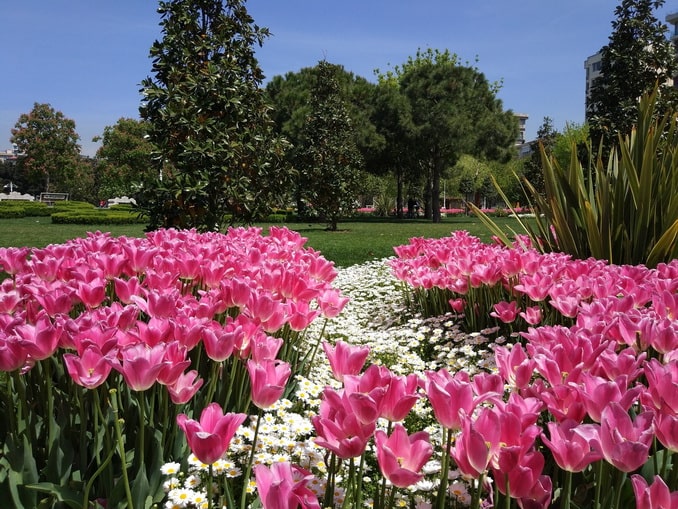 In itself, it is an optimistic time. Promising changes for the better and preparing consciousness for the coming summer.

Everywhere, of course, it’s different, but in Istanbul, spring looks exactly like this. After all, already in March and April you will enjoy the warming sun. Sometimes you have to not just unbutton the jacket, but take it off altogether.

This should be done carefully – the Bosphorus winds strictly ensure that unreasonable citizens do not relax. But you will feel the real spring warmth guaranteed. And along the way, make sure how small the number of tourists visiting the city is at this time.

Sometimes the Easter holiday (in 2023 – April 16) becomes an exception, and there are more foreigners in the city. But in general, until the final month of spring, the main Turkish metropolis does not see crowds of travelers loitering around.

But it literally transforms himself. And tulips blooming magnificently in gardens and parks only add charm to it.

Is the weather in Istanbul promising something incredible in May? Depending on how you look at it – if you are waiting for temperatures around +20-25 ° C, then yes!

Rains are relatively rare, there is a lot of sun, as well as light.

At the same time, it gets hot only towards the end of the month. And noticeably – up to +30 °C.

We will be subjective and even original in some ways. Because we’ll try to dissuade you from traveling to Istanbul during the summer months..

For it’ll be hot and often stuffy here. And you, instead of looking around in search of the beautiful, will start looking everywhere exclusively air-conditioned.

Try to stay longer in cool places. And stay in the basement of the Basilica Cistern for a period clearly exceeding the time required for its inspection.

Yes, boat trips along the Golden Horn and the Bosphorus in these months are going with a bang. Partly because the weather in Istanbul in August is too hot! And everyone seeks first to cool off, and only then look around.

In summer, people go to Istanbul from Antalya – in whole excursion groups. And obviously they don’t suffer much – it’s even hotter in the Turkish Riviera at this time. 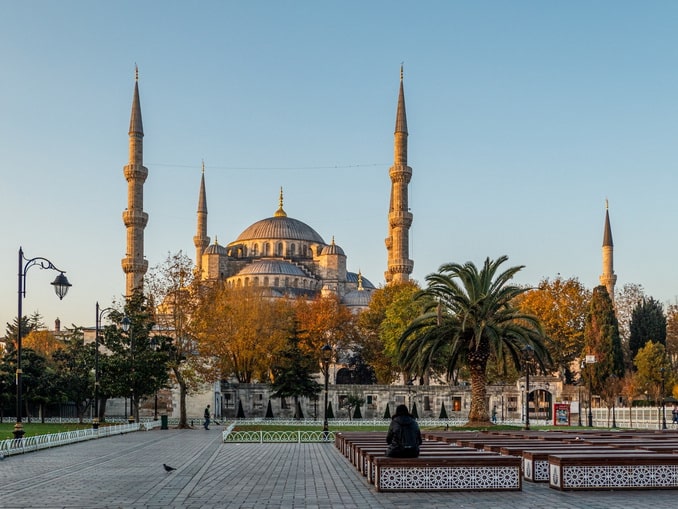 With this period of the year, everything is exactly the opposite – September is definitely much better time to go to Istanbul. And not only in order to diligently and for several days consider its sights. But also to be able to later move to the sea in autumn Bodrum or Marmaris.

Or even go to the Turkish south. And what, there is nothing complicated about it – the distance from Istanbul to Antalya allows you to spend less than 10 hours on the road

As for the weather, at first it doesn’t seem to notice the onset of autumn. As its beginning in Istanbul looks gorgeous: the air heats up to +30 °C and above, and the sun warms like in summer.

By the second and third decade of the month, the picture does not change too much: the atmosphere warms up to +23-27 °C during daytime hours. And it doesn’t catastrophically cool down at night.

If you believe this forecast, then you can not only walk, but even swim. Fortunately, there are many places on the coast that can be easily reached from Istanbul. For example, the townspeople go to rest on the sea in Kumkoy or Shila. While you can just take the ferry to the Princes’ Islands…

There is no major change in weather patterns in Istanbul in early October – it’s still warm, up to +20-24 °C. It’s just that swimming is no longer pulling – the wind becomes at times too piercing, and the water cools down.

You want to spend a lot of time outdoors and look far into the distance on observation decks. After all, the air at this time becomes incredibly transparent and fresh!

Clear and warm days come in a pleasant succession. And in each of them there is an interesting thing for you.

Try, for example, to travel from Istanbul to Cappadocia. After all, cloudless weather prevails in this region in the middle of autumn.

And there are seemingly more balloons in the sky than at the peak of the season, in summer!

We advise you also to consider a trip to Istanbul in early November. For the final chord of autumn at this point of world sounds far from sad. On the contrary, it is even life-affirming.

In any case, at first you will be able to take pictures against the background of the Bosphorus in a light jacket or even a T-shirt! And even in the second half of the month it will be possible to walk along the streets and embankments far from wearing a down jacket!