Paris in November – is it worth going? Weather, how to dress, prices 2022. What to see in Paris at the end of autumn, where you can go – in the material of good Time to Trip.

November is traditionally considered not the best time to travel. Cold or at least damp – in most cases, even in tropical countries this month it pours like a bucket – it scares off most potential tourists with its obvious unpredictability.

At this time, the beaches are empty. It becomes much freer on the streets and many European cities. So much so that anyone can be surprised – where did everyone go?

What is Paris like in November? According to popular belief – the capital of the world? And a city where there is something to see and do even in the worst weather?

We tried to find out the details and explore the prospects. And also to understand what sights in Paris and nearby are worth seeing on the threshold of winter.

And that’s what happened…

Weather in Paris in November

Most forecast sites claim that it is windy and – most importantly – fickle. All the time is in “search for itself” and is ready to spoil any, the most prudent tourist plans.

Perhaps it is so … But then explain!

Why near the Eiffel Tower and at this time crowds are trampling around? The Champs-Elysées full of walkers from morning to evening? And there are so many visitors in the halls of the Louvre that the question comes to mind – what is it like here in the summer?

The air temperature during the day prefers to live in the range of + 12-16 °C. And at night it does not try to shock the townspeople and tourists – in most cases, thermometers show + 8-12 °C.

November 2021 in Paris turned out to be a bit colder.

Since in the first decade of the month the air did not warm up above +12 °C. And by the end of it, the air temperatures had ceased to rise above +5 °C.

The number of sunny days, according to long-term observations of weather forecasters, is frankly small. And most of the time in November you’ll have to see Paris under leaden skies.

It rains moderately. And the average number of rainy days rarely exceeds 4-6 per month.

But the high humidity and harsh strong winds will make those who haven’t brought enough warm and waterproof clothing to regret.

Note, that the “wet” autumn Paris has its own, very special, but powerful aura. Which on the spot strikes romantic people. And all those who look at life and travel from a different angle than the common one.

Due to the fact that in some years, even in early November, air temperatures in Paris can hang around zero, potential travelers should approach the issue of equipment with all seriousness.

Carry enough warm sweaters in their luggage. And bring jackets that can withstand (almost any) weather conditions.

Even hats and gloves may be useful, not to mention scarves. You should also bring thick-soled shoes with you. Or even find a place in a suitcase for rubber boots.

We would not recommend taking umbrellas – yet Paris is not Venice in November. But raincoats have a chance to come in handy. 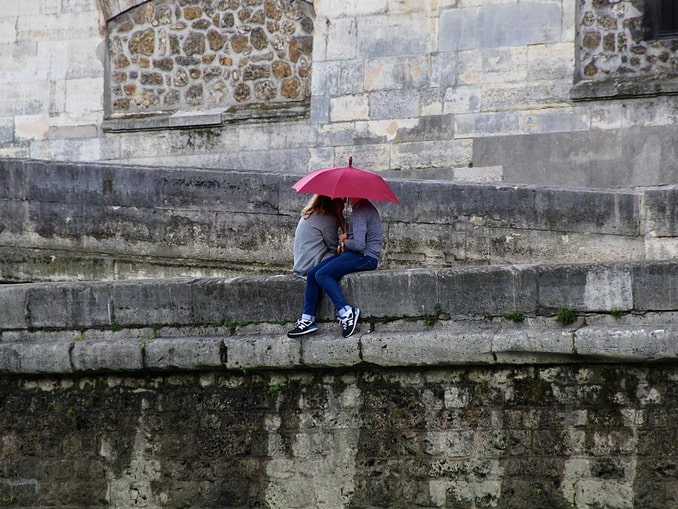 Especially if you are planning to go from Paris to Normandy: look at Mont Saint-Michel and the cliffs of Etretat. Or want to go even further, to Brittany shrouded in mist at this time of year…

Naturally, the apartments and hotels of Paris in November falls. But expecting it to drop to a level that will cause enthusiastic comments from tourists like “how cheap” is not worth it. As the capital of France is in demand at any time of the year.

So you can immediately write off the cost of accommodation in the City of Light of 100 € for two per day. At the same time, if you dream of central locations, then sacrifice amenities.

We recommend paying special attention to the Est Hotel, which is located in the 10th arrondissement. You can walk to the city center from here – even if it takes 30 minutes. Yes, and the stations – Gare de l’Est and Gare du Nord – are located very close.

Fresh reviews about the Hôtel de Bordeaux from the same 10th arrondissement are also quite good. Chic location, comfortable beds, helpful host. The place is especially fit for those who intend to travel to Reims or, for example, Strasbourg.

Inexpensive, despite being located right in the historic Marais, Hotel Rivoli. The guests of which therefore tend to close their eyes to shortcomings. Such as the missing elevator or a noisy tourist street right under the windows.

An hour-long cruise on the Seine with an audio guide all year round costs around 15 € per person. But if you include an (independent) visit to the Louvre in the program, you have to pay from 35 €.

The cost of a guided tour through the halls of the Palace of Versailles is from 50 €. From 40 € you need to spend if you want to climb the Eiffel Tower with a competent guide.

In November, you will arrive in Paris or in May, you will have to take a number of mandatory actions.

Naturally, this does not apply to those who have previously climbed the Eiffel Tower or been inside the Louvre. For travelers who have previously visited the capital of France, we advise devoting more time to the best Parisian museums. Look pictures not only in Orsay or Pompidou, but, for example, in Jacquemart-Andre.

Visit some churches and pay attention to the Museum of the Middle Ages in the former abbey of Cluny. Or maybe just stroll through the Latin Quarter with a guided tour – even in November you will not be disappointed!

Definitely worthy of attention is the royal Sainte-Chapelle. Especially in an era when Notre Dame de Paris is being rebuilt after a fire.

Visit the castle of the Conciergerie, before the construction of the Louvre, the former main residence of the French kings. And walk the streets of the tiny island of Saint-Denis, one of the most unobtrusive sights of the huge city.

Citizens with strong nerves should to dive into the Parisian catacombs. And those who love silence and solitude more – spend a few hours in the Luxembourg Gardens. In good weather, of course.

Covered with the glory of the Impressionists, Montmartre, like the Sacré-Coeur Basilica, you are unlikely to miss even if you arrive in Paris for only 3-4 days. But there are queues near the Eiffel Tower, and pandemonium on its floors…

We advise you not to get hung up on nearby sights like the Palace of Versailles or the hunting residence in Fontainebleau, but to undertake a relatively long-distance voyage. Not necessarily, by the way, to Normandy or even Nice.

For example, from Paris you can go to see the famous French castles. The same Chambord or Chenonceau, other famous сhâteaux in the Loire Valley. Blois, Amboise, Anger…

Travelers praise the former residence of Condé in Chantilly. Representing not just a beautiful and well-groomed estate, but one of the largest art museums in the France.

The castle of Pierrefonds is postcard beautiful, capable of becoming an illustration for the fairy tales of the Brothers Grimm. The Compiègne Palace has preserved a lot of historical interiors. Regularly saw the French kings and Emperor Napoleon Bonaparte.

Few people know that in the vicinity of Paris there is a real safari park, Thouari. Spread, by the way, around a charming old chateau.

Very beautiful in late autumn the Museum of Impressionism in Giverny. Indeed, here you can experience a surge of vivid impressions!

It is worth bearing in mind that in November the opening hours of this museum change a lot – giverny.org/museums/impressionism/guide/.