Venice in Winter – is it worth going? Weather, air temperature, how to dress, prices 2022/2023. What to see in Venice from December to February, where you can go in Veneto – in the article of goodTimetoTrip.

Winter and Venice do not seem to be compatible. After all, you must admit, it’s hard to even imagine how a city standing on the water can survive the classic cold season.

When, in theory, all the channels freeze. And the sidewalks are dressed with a slippery crust of ice due to high humidity? As for roads, they are turning into something that is completely scary to think about?

However, in Venice, took care of this by completely banning cars and other buses. Allowing them to enter just to park far outside city center.

For in winter Venice rarely sees totally cold weather, snow and ice. And knows little about the problems faced, for example, by its northern colleague, russian St. Petersburg.

Since it is usually pretty warm and sunny in the north of the Adriatic Sea from December to February. And the weather in general is such that there is no particular need for tourists to postpone their visit to another time of the year.

Why then are travelers in winter rare guests at the La Serenissima? For what reason does Venice see something like a real revival only in February? And only because the local carnival is an event consecrated for centuries?

We tried to figure it out!

Weather in Venice in Winter

In fact, it can be considered almost ideal from the point of view of a tourist aimed at Venice sightseeing and long walks.

Yes, it is not too hot, and due to the abundance of water often dank. But on the other hand, the city becomes almost deserted and quiet. Adjusts to a romantic, slightly touching perception of reality.

After all, all these houses and spiers, slightly showing through the fogs, illuminated by unsteady sunlight, look like a decoration for a fairy tale. Fragile, magical, but at the same time absolutely realistic…

Note that this is not a theatrical production, but a real journey. Which has every chance of forever getting stuck in memory.

Especially if you will buy in Italy something for memory. Or diversify walking and shopping with one or two not stereotyped excursions. Not particularly expensive this time of year…

The air temperature in the first month of winter in Venice during the daytime tends to be +7-12 degrees Celsius (44,6-53,6 degrees Fahrenheit). It rarely happens lower, but thermometers almost never look higher.

But against the backdrop of almost 100% humidity and dampness that is noticeably pulling from the canals, such weather freezes. Especially those, who thoughtlessly left warm winter clothes at home and decided to walk around in short jacket.

Frosts at the same time occur vary rare. And snow and ice slush can crawl along the Grand Canal only closer to the end of winter.

They say that the main transport artery of the “City of Canals” sometimes freezes completely, allowing ice skating rinks to be set up right in the middle of the fairway. But it is such a rarity that to see it at least once in your life is a kind of luck.

The sun appears in the sky infrequently – usually everything is bathed in a thin veil of fog, which gives way to the usual cloudy day by noon. But even the rains at the beginning of winter do not bother the guests.

According to statistics, only 4-6 days per month can pour from the sky. An insignificant figure if you compared with local November.

The luminary goes to sleep early – at 16.30 in December in Venice is already an “eye if”. And it becomes not very pleasant to walk.

For the Venetian darkness, multiplied by the tourists who suddenly disappeared (and where – only they were here?), looks no longer romantic, but even dangerous. 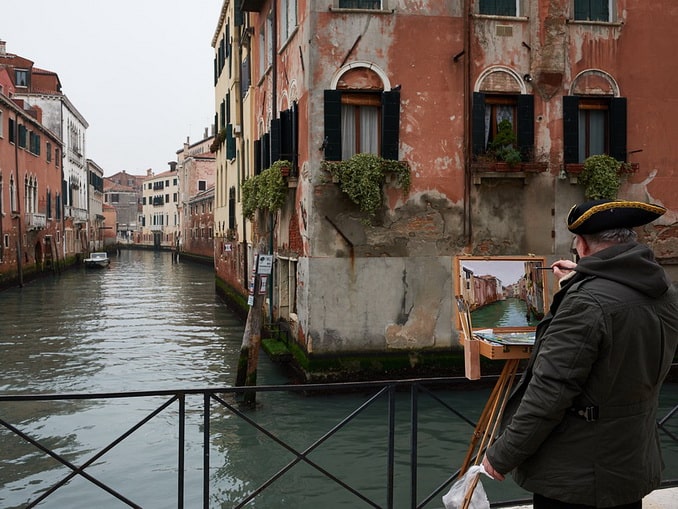 As if directs sharpness – the air becomes more transparent, but also colder. Tourists arriving in Venice to celebrate the New Year even have a chance to feel the frosty breath of winter.

In 2022, the local January, for example, kept intrigue for a long time at night, plunging the thermometers almost to zero. But in fact, it did not dare to surprise guests with a real minus.

Usually everything is somewhat warmer: both during the day and at night. +3-6 °C (35,6-42.8 °F), of course, are not summer temperatures. But with the right equipment, tourists can make good use of their time.

Moreover, the precipitation in comparison with December moderates its agility. And the sun stays in the sky a little more often.

The month of the Venetian carnival, which traditionally held here, is very unstable in terms of weather. And the air temperature can vary from +10-12 °C to minus marks.

For a long time in the negative territory, thermometers do not linger. But sometimes even short excursions there are enough to immerse the citizens arriving “in anticipation of the holiday” into a semblance of pessimism.

After all, when it is sleet, and ice floes float between the vaporettos, the thought of an erroneous choice settles in the head. Especially for such (a month not cheap) money!

On sunny days, the colorful extravaganza of the carnival successfully lifts the mood. But the fact of the matter is that at the end of winter they don’t go here in an endless succession.

Let’s see current prices for Venetian hotels and apartments. Which even in winter not so low – especially if you take into account off-season.

In general, you need to focus on the bar of 70 euros per night – today this is the minimum. Below which the owners of really good housing in Venice try not to fall.

We advise you to pay attention to inexpensive, but rated Ca’ Degli Antichi Giardini Apartments in the Cannaregio area. That is, literally next to the train station and bus terminal in Piazzale Roma.

Well located – also in Cannaregio, but not far from the Rialto Bridge – Hotel Mezzo Pozzo. Deserved high ratings (8.9) from the guests, even though the windows of the rooms overlook a blank wall.

In a quiet area of ​​Castello is a small and cozy apartment Ca’ di Paolo. To get to San Marco you will have to spend 10-15 minutes. But you get the opportunity to settle in an authentic, truly Venetian area. That never experienced the invasion of crowds of tourists.

The main attractions of Venice are in demand at any time of the year. But in winter, even the Basilica of St. Mark and the Doge’s Palazzo are not overcrowded with foreign visitors.

So you can go inside, and then, for example, look at the paintings in the Academy Gallery, not particularly crowded by anyone. In addition, and avoid standing in long lines.

It is obvious that this allows to draw up a richer program of the visit. Without haste, explore the islands of Murano and Burano, get to Torcello, Lido. It is possible to carve out time even for out-of-town trips.

Indeed, in order to see Verona, literally one day is enough.

You can also visit other interesting cities in Veneto.

Get to Padua and Vicenza. Or find the main sights of Treviso, rarely visited by tourists on purpose.

Maybe get out of the region! After all, it is not often that a traveler has the opportunity to see Ferrara. A small town in Emilia-Romagna, not at all spoiled by tourist attention, but fascinating!