What to see in Barcelona in 2, 3 or 4 days? Most famous sights of the Catalan capital, convenient routes, ticket prices 2023. What to visit near Barcelona, ​​how much individual and group excursions cost – in the article of good Time for Trip.

Some experienced travelers claim that planning and carrying out a trip to Barcelona, ​​even on your own, is a simple matter. Because this city, although large, is reasonably planned. Besides, it is well-structured by time periods and therefore ideally suited for study even by citizens who have not been here before.

Today, for example, you are exploring top attractions of Barcelona: the Gothic Quarter and the Boqueria market, walking along La Rambla. Tomorrow will study the creations of Gaudí: the Sagrada Familia and famous Casas.

Then see the Montjuic hill and finally climb Tibidabo. Or – depending on the desire and the season – go to admire the big and small fish in the local Oceanarium.

There is even a certain contingent of travelers who manage to see Barcelona in just 1 day – not even two! And what else is left if you come to relax in Salou, Cambrils, Lloret de Mar or Blanes?

Giving explicit priority to spending time on the beach. But, naturally, consider it indecent not to visit the capital of Catalonia at least once?

Our opus, however, is designed for more respectable people. Those who approach the matter thoroughly and intend to act slowly.

Most tourists do not think too much about where to start. And that’s why they immediately buy tickets to the Sagrada Familia.

Naturally, they look at the great cathedral not only from the outside, but also go inside. Believing that they will immediately be imbued with the ideas of a futuristic architect who worked in a peculiar, but heartfelt manner. And in fact they are imbued – everything in the Cathedral is very unusual and large-scale.

The guide’s story will shed much more light on what you will see in front of you. But it will also make you fork out for a decent (from 65 €) and sometimes even an indecent (from 85 €) amount.

If you sum it up with the prices for tickets to the cathedral itself in 2023 (26 € for a visitor over 30 years old), you can shed a tear… sagradafamilia.org/en/prices.

In summer, you can lose up to 1.5 hours in the queue for tickets. Therefore, it is recommended to come even before the ticket office opens, at 9 am. Or buy tickets in advance, via the Internet.

Following the Sagrada Familia, it is worth throwing a glance at other iconic creations of Antonio Gaudí: Casa Mila and Batllo on Passeig de Gracia. From the cathedral to the boulevard by metro, go only 2 stops (Sagrada Familia – Diagonal). 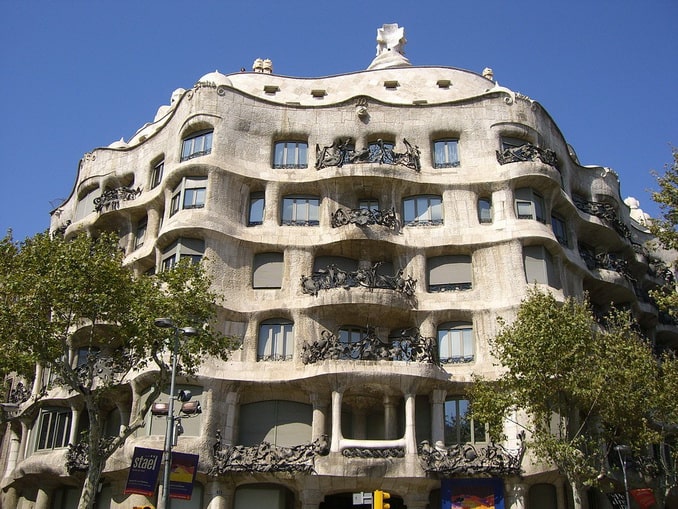 Young and not lazy travelers can overcome the distance on foot. And accumulate an additional portion of impressions!

A visit to Casa Batlló costs more – € 35 when ordering online, and € 39 when buying a ticket at the box office.

Skip the line will increase the costs even more. If only Gaudi knew how much you can earn on a name!

Expensive? Maybe! But there are enough people who want to see these sights of Barcelona even in March!

Those who do not want to pay, look at the buildings from the outside – this is enough to get an idea. And along the way, they also admire the neighboring house of Amalle, another iconic example of Catalan Art Nouveau.

So we’re moving on!

The oldest district of the city, Barri Gotic, starts right behind Plaza Catalunya. On the one hand, it is limited by the La Rambla, where a tourist river flows from morning until late at night. On the other – Via Laietana Avenue.

For those who visiting Barcelona on their own, but are in a hurry, we will only mention the iconic points of this quarter. They are:

It is most practical to explore the oldest district of the city in the company of a guide. Fortunately, there are more interesting routes that enthrall tourists along the streets and squares, historical eras every year. One of them will surely be to your liking!

Finding affordable and good accommodation in Barcelona, ​​even if it’s a hostel, is hard! Especially if time is running out and your plane is already warming up the engines for a flight to Spain. Therefore, it is better to make a choice minimum 3-4 months before the trip!

Minimalism in the interiors, cleanliness, and reasonable prices distinguish Hotel Raval House. Breakfast is included in the price, La Rambla can be reached foot by foot in a few minutes.

Five minutes from the sea (Bogatell Beach) is Travelodge Barcelona Poblenou. It has its own parking in the building, in 5 minutes you will get to the Llacuna metro station.

Notably further from the center is the inexpensive Ona Hotels Mosaic. But the rooms here are clean and tidy, the furniture and plumbing are fresh, and the breakfasts are praised! Yes, and to the metro Badal – 3 minutes walk.

Please, note that you will have to pay a city tourist tax. However, it is not too large and, in addition, depends on the stardom of the object where you stay.

For luxury options like 5 stars, tourists are charged the maximum: about 5 € per person per night. The same tax applies to apartments rented through AirBnb and analogues.

4* hotels enjoy significant relief and collect only 2.7 € per night from guests. All other accommodation facilities charge around 2 €.

Remember that the tax is taken only for the first 7 nights, and the rates are the same for all of Catalonia. Guests aged 0-16 are exempt from payment.

The Park Güell and the Tibidabo hill, Magic Fountain at the foot of Montjuic hill, the fortress itself, as well as the city port with Columbus’ column and the Oceanarium. This is the recommended (by us) list of what you can see in Barcelona for one of two days. Since it is unlikely that it will be possible to study everything in detail, one of the points can be skipped.

Naturally, not the main one – you should certainly buy tickets to Park Güell. If only because it is one of the symbols of the Catalan capital. 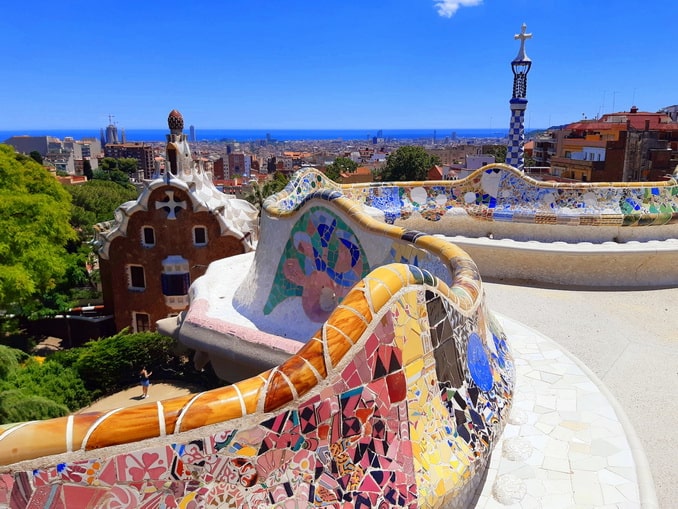 Yes, and the visit is inexpensive against the background of other famous creations of Gaudí. It is curious that the park was not conceived as a recreational area for the townspeople – on the contrary, it was a commercial development project on the outskirts. And if it succeeded, only the owners of villas and their friends would walk on it now!

But at the beginning of the 20th century, rich Barcelona residents did not fall for a cottage village in the suburbs. And even the neighborhood with Gaudi – now the house-museum of the architect is located here – did not make them bying homes there. Therefore, the number of buildings in the park is simply negligible.

Today, real estate in Spain in Barcelona is in price. But if you can buy an apartment in the historical center, albeit for a lot of money, then cottages in the park are not for sale. Because it is a national treasure now!

We also recommend you climbing Tibidabo. To visit the modern, but catchy temple of the Sacred Heart. And also to take a look at the metropolis, sprawled at the foot of the mountain, to assess its scale.

Then set off in the opposite direction, to the fortress on the coast. However, not quite to it!

After all, with the onset of twilight, magical melodies begin to sound near the Magic Fountain on the hill of Montjuic. Take the chance, end the day to the music of Chopin and Tchaikovsky!

On the third day of your stay in Barcelona, ​​we recommend you to see the Gothic Quarter not hastily, but with the eye of an experienced and sophisticated viewer. Look, for example, at the Temple of Augustus, the ruins of which are more than 2 thousand years old.

As part of the tour, visit the Boqueria market, marvel at the abundance of choice. Walk through the Jewish Quarter, El Call, a little-known gem of the Catalan capital. Immersing in the depths of the Middle Ages is better than any historical novel.

See the Palace of Catalan Music, Palau de la Musica Catalana, a beautiful Art Nouveau building designed by the iconic Catalan architect, Lluís Domènech y Montaner. Stop by the Picasso Museum in a beautiful old mansion that houses the second-largest collection of the artist’s work in the world.

Where is the first one, you inquisitively ask? Far from here – in one of the top museums in Paris. However, an express train will take you to the French capital from Barcelona very quickly.

Then get to the Santa Pau Hospital, another masterpiece of Domènech y Montaner. Surprisingly, this masterpiece of Art Nouveau architecture, absolutely functional, but at the same time a fantastically beautiful complex is located strictly on the north-south axis with the Sagrada Familia!

It is possible to take part in a sightseeing tour to consolidate what you have seen and relax a bit, looking around. Barcelona City Tour buses run on two different routes covering different parts of the city (one ticket for each): East and West Route.

An evening tour of Barcelona will allow you to look at the city from an unusual angle. Crooked streets of the Gothic Quarter, cobblestones, lanterns, masterpieces of Gaudí, the Rambla frozen until the morning… Sagrada full of mysterious meaning. You will be amazed at how impressive and even mystical the local streets look when the sun goes down or even goes down.

What interesting sights can be visited in Barcelona on the 4 day of your stay?? In our opinion, it’s time to pay attention to the surroundings of the Catalan capital!

An informative and unusual experiment will be a trip to the Montserrat Monastery, lost in a beautiful mountainous region 45 kilometers to the west. The well-preserved religious complex is located in a visually inaccessible place. But in fact, it is easy to get there by transport.

Locals come here to bow to the legendary “Black Madonna”. Tourists will be interested in everything: from the mountain railway and the San Joan funicular to the architectural complex and the very way of life. A complex ticket for an excursion from Barcelona will cost from 52 € per person.

If you will be in Catalonia in the summer and with children – spend a day visiting PortAventura. A wonderful theme park, one of the best in the world, is located near Salou. It is 100 km south.

Tickets cost from 48 € when purchased online. There are many combination options that allow you “to save”. Having received more opportunities, but at the same time parting with a larger amount.

Other possible itineraries from Barcelona for a day or two – including to Vic and Figueres, Tarragona or Girona – we have described in a separate article. We will not repeat ourselves here, only emphasize that there are enough interesting locations for tourists in Catalonia for at least a week-long road trip.

For those who want to get to Andorra, a separate practical material is addressed. With up-to-date prices for buses and taxis, distances and travel time.