What to see in Cappadocia in 2-3, 4 days or more on your own? When is the best time to go, 2022 prices for hotels, excursions, how much does a balloon flight cost? How to get to Cappadocia from Istanbul or Ankara, where it is better to stay – in the good Time to Trip review.

Cappadocia is a historical region in Turkey. Located in Central Anatolia, largely within the province (ile) of Nevsehir. It is famous for its expressive and bizarre landscapes of natural origin.

Literally every traveler considers it his duty to see the underground cities in Cappadocia. Each of which was inhabited probably before the birth of Christ!

Significant if not the main attractions of Cappadocia are ancient Christian churches. And entire monastic complexes, carved into local limestone rocks. In some, frescoes from the early Byzantine period have been preserved in very good condition.

The boundaries of historical Cappadocia are not defined, especially in the west. In general, the area is considered to be bounded by the Taurus mountain range in the south, separating it from the Mediterranean coast.

The regions of Lycaonia and Galatia is in the west. The coastal regions of the Black Sea – in the north. And the upper reaches of the river Euphrates – in the east.

Cappadocia is located in eastern Anatolia, southwest of the large city of Kayseri. In the center of a vast mountain plateau with an average height of about 1 km.

The highest point is the volcano Erciyes (ancient Greek Argeos, Argaeos) with a height of 3,916 meters. By the way, its slopes are actively skied in winter!

The earliest mention of the region dates back to the 6th century BC. That is, the reign of the Persian kings from the Achaemenid dynasty, Darius I and Xerxes.

Translated from the Old Persian, the name Cappadocia probably meant: “the land of beautiful horses.” 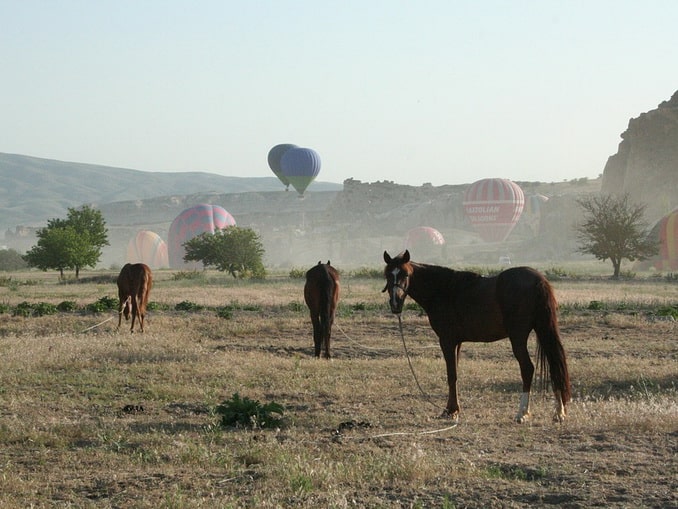 However, enough numbers and history – everything a tourist needs to know is contained in the phrase: all paths lead from Goreme. Because from this from, the uncrowned capital of the region, usually start both walking and automobile exploration of the area.

Walks through numerous valleys, trips to underground cities… Even balloon flights over Cappadocia also start from Göreme. Moreover, interestingly, those who wish begin to collect at 3 am. To take off exactly at dawn.

Is this attraction, especially loved by tourists, expensive? In 2022, the price may break into the region of 150 € per person. But out of season, you can arrange a flight for two-thirds of this sum.

The best time to go

Cappadocia has a pronounced continental climate. With hot, dry summers and cold, snowy winters. In the peak months of the season in the valleys sometimes there is nothing to breathe! The sun literally heats the rocks, and the air temperature regularly rises to +35 and more.

The nights are much colder. So much that going outside in a T-shirt, even in summer, you can catch a cold. That is why at least a windbreaker should be present in the wardrobe of any traveler who is going to visit Cappadocia.

There is little vegetation: you can trees and shrubs, but there is no smell of forests. However, the structure of the Cappadocian soil is almost ideal for growing grapes. And wine from here are praised on specialized forums.

The hottest month here is August. July is not far behind. However, this does not scare away tourists – these months considered the high season here.

Therefore, it is more correct to shift the dates of the trip to April-May. Also it is remarkably warm and sunny in Cappadocia in September and even October !

In March and November, the atmosphere sometimes warms up to +15. But the weather is unstable.

In December, it is quite warm here and little reminds of the arrival of winter.But in January and February, temperatures often drop below 0 degrees Celsius.

The Meskendir Valley is distinguished by extremely picturesque, even slightly unearthly landscapes. Most people prefer to view them from the air. But there are enough adherents of hiking.

In the Red Valley you will see the houses of the gnomes. And in Pink, so named because of the soft pastel shade in which the rocks are painted in daylight, there are many cave churches.

The city of Chavushin is famous for its rock completely eroded by human dwellings. It is very interesting to climb this prehistoric “human hill”. And then enjoy the surrounding scenery.

There are also their own “fairy chimneys”.

Naturally, a car is an invaluable assistant when traveling around the region.And if you don’t want to rent a car on site, you can always come here with your own vehicle.

Main highlights of Open Air Museum are churches, many of which have preserved Byzantine frescoes. Perhaps the most famous is the Dark Church.

Light enters it through one small window, which favorably affected the preservation of the original frescoes. The admission ticket is worth the extra money – on top of what you paid to enter the museum itself.

South of Göreme is located one of the local Love Valleys, lined with giant stone fingers.

You can walk to it on your own. For example, by going along the Pigeon Valley towards Ukhchisar. Then turn right, cross the road and head north in the opposite direction.

Pasabag is a valley of stone “mushrooms”. And if you wish, you can also walk to it from Göreme.

But there is an easier way to get there! Boarding a dolmush going towards Avanos and getting off at the turn to Zelve. To which gravitates the valley with its own national park, Zelve Açık Hava Müzesi.

It is worth warning the driver about your intention to exit at the turn . Because otherwise you will go to Avanos.

The main attraction of Pasabag is the church of the hermit, St. Simeon. It is located inside the three-headed “mushroom”. 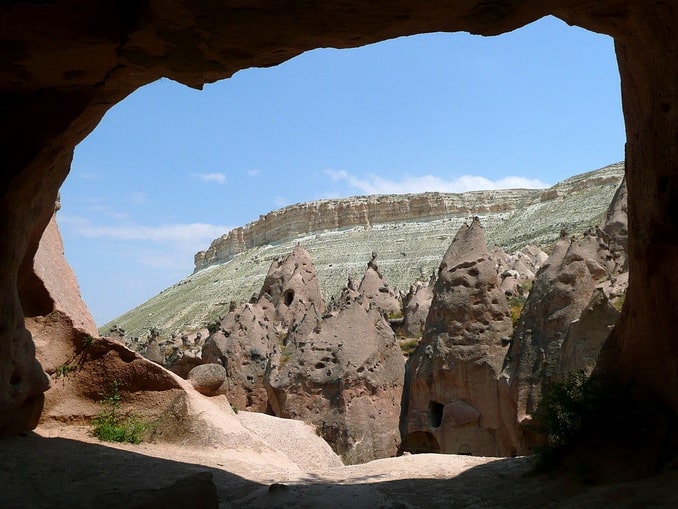 Very popular around travelers, this valley has a second name – Imagination. For local stone figures literally awaken the imagination.

Here everyone can see something of their own. The famous landmark of the Devrent Valley is Camel Rock.

Uchisar is a mountain village famous for its fortress and dovecotes. Hollowed out – of course – in the local rocks of a bizarre shape.

To get into it from Goreme, you should choose the right gorge – Pigeon Valley.

In Cappadocia, there are 36 underground cities. There were inhabited during the time of the Hittites, in the second millennium BC!

It is unlikely that underground cities were used for long-term habitation. But they were clearly built in order to escape during attacks.

For long periods of time, numerous people and their pets could exist here. The city organization was very complex. And there was probably constant work to improve the infrastructure.

The underground city of Kaymakli was built under a hill and opened to visitors in 1964. The inhabitants of the village of the same name built their houses above the tunnels of the underground city. And they still use the most convenient places in the cellars, storage rooms and stables, which they enter through their yards.

The number of storerooms in such a small area supports the idea that many people once lived here. Archaeologists believe that there could be up to 3,500 of them.

Kaymakli has low, narrow and gentle transitions. The underground city consists of 8 floors underground, but only 4 of them are open to the public.

The underground city of Derinkuyu is located 40 km from Goreme. Over 600 rooms on 14 floors (8 are open to the public), the total depth of occurrence is approximately 85 meters. It was assumed, apparently, complete autonomy.

There are common areas: stables, cellars, warehouses, refectories, churches, wineries, water tanks. A lot of ventilation ducts are also provided. And not everyone comes to the surface to protect the inhabitants of the underground city from poisoning.

Also were created balanced moving stone doors. Quickly blocking corridors in the event of an attack.

The underground city of Derinkuyu was opened to visitors in 1965. But until now, just about half of all premises in total are available for inspection.

Most travelers who are going to visit Cappadocia choose one of the hotels in Göreme as their base. Fortunately, there are many of them there. And most of them will satisfy the aspirations of even the demanding traveler.

Extremely popular and at the same time inexpensive (about 45 € per night in September) Elite Cave Suites. A wonderful cave hotel with a good location and helpful staff.

Not bad and Cappadocia Caves Hotel. Sometimes a little more expensive, but obviously deserved a rating of 9.4 for a reason! 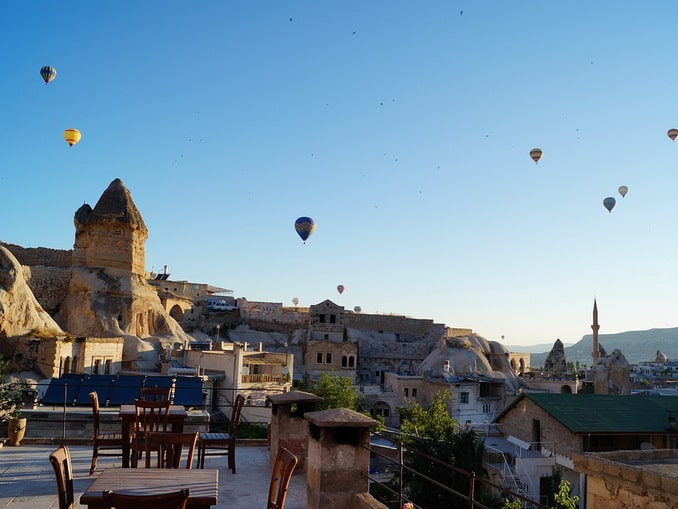 Cappadocia has good transport accessibility. Kayseri Airport, for example, is connected to Istanbul by regular flights.

However, you cannot get directly from the air hub to the center of the region – first you have to get to the city bus station. Many hotels in Goreme therefore organize transfers for guests – for some money, of course.

The capital of the province, the city of Nevsehir, is connected by regular bus service (9-10 hours on the way) to the resorts of Antalya and Alanya.

It is quite easy to get from Ankara, the capital of Turkey – buses regularly depart from the capital’s bus station. In addition, sightseeing tours to Cappadocia are offered in any more or less resort town in Turkey.