What to eat in Italy: what dishes should you taste in restaurants in Rome and Naples, Florence and Venice? What are minestrone and carpaccio, lasagna and risotto made of, the features of the national cuisine of Italy – in the article of good Time for Trip.

Those who had a chance to taste Italian cuisine in her homeland: in Rome, Naples, Bologna and other cities, will confirm that they are original and unique. Not always, of course – tourist crowds have relaxed restaurateurs so much that they stopped paying attention to quality.

But if you are lucky and can find an authentic pizzeria, pastiseria or gelateria where the citizens of Italy eat themselves, then the experience of visiting the country will be different. Much more delicious!

The characteristic features of Italian cuisine are explained by the local climate and those products that have become widespread in a particular region. However, although each region of Italy boasts its own special recipes, some dishes are quite versatile.

So, you can try absolutely amazing pizza in the north of the country. And taste excellent spaghetti bolognese in its far south.

However, regional affiliation even today matters. Which makes getting to know Italian food doubly exciting. And it makes you often taste Tiramisu in between walks in Venice. Or there is only one Margherita while you are visiting Naples.

But we are talking! Get to the point!

that are must-try for tourists. We will move in accordance with the list approved by us. Although you, of course, have your own preferences.

This is a real symbol of the Apennine country. Well known all over the world and often even brought from Italy as a gift. And there is nothing shameful in this – even the factory-made spaghetti produced here is so good that you will enjoy it thousands of kilometers from Rome.

The number of types of pasta in Italy is amazing. But two have become especially popular.

Bolognese managed to become more popular than Bologna itself! After all, spaghetti with tomato sauce and meat sauce is on the menu of restaurants even outside of Italy.

But in their homeland, bolognese is usually eaten with tagliatelle pasta, which was invented here. This is said to be because its flat shape and rough texture are better at grabbing the sauce.

Some would call tagliatelle noodles. But the essence of this will not change – this Italian dish is a real culinary delight!

Another incredibly popular type of pasta that is best cooked in Rome. This is because in the “Eternal City” carbonara is made not with bacon, but with pork cheeks.

And they say that the cooking recipe came from the people. It was as if the local coal miners were eating, carbonaio.

Today it is impossible to imagine traditional Italian cuisine without pizza. This food is simply adored here, and the number of pizzerias in the country has long gone beyond all reasonable limits.

In some Italian eateries, the menu consists entirely of different types of pizza. Naturally, today there are enough places where you can see the process of its preparation with your own eyes.

According to tradition, pizza dough is left to mature for 16-18 hours. And for the filling choose only the freshest products. A real pizza is cooked in a wood-fired oven, due to which the taste and aroma of all ingredients are preserved.

Neapolitan Margherita with mozzarella and tomato sauce is a classic of the genre. But the number of varieties of pizza is several dozen. However, so far, only napoletana pizza is considered an intangible heritage of humanity by UNESCO. 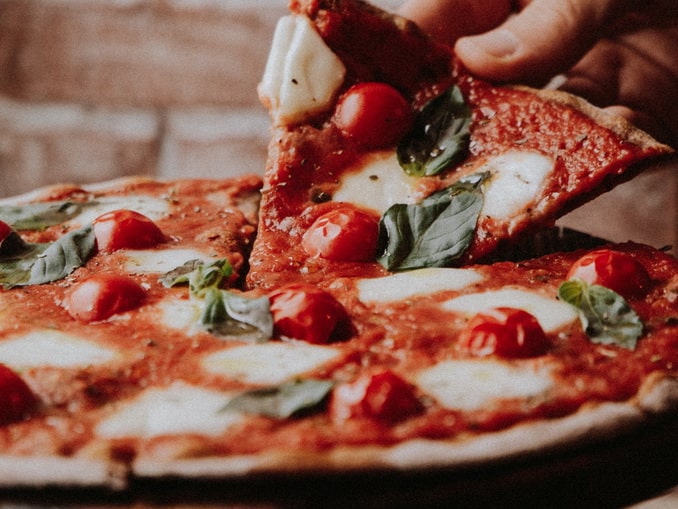 Yes, the Italian dishes mentioned above are the most popular and well known in the world. But the list is not limited to pizza and spaghetti.

Soups are very popular in Italy. But first of all, you should try minestrone – a traditional vegetable soup that has become the embodiment of the features of national Italian cuisine.

Initially in Italy, minestrone was made from leftover main courses or inexpensive vegetables. The main components of minestrone are meat broth and fresh vegetables. Which, depending on the season, can be as much as you like.

Therefore, the consistency of the dish varies from liquid to incredibly thick. In some national recipes of Italian cuisine, minestrone is supplemented with rice, pasta, pesto sauce. Before eating the soup, grated parmesan and fresh chopped greens are added to the plates.

If you value pizza dough more than toppings, take a look at focaccia. This cake is prepared in a similar way and therefore it is incredibly tasty.

Focaccia is commonly associated with Ligurian cuisine, where it is traditionally baked with olive oil and salt. But today you can find a variety of varieties of this bread: with rosemary and basil, cheese, tomatoes, olives.

In general, the original focaccia should be tasted in Liguria. But if you go, for example, to Tuscany – what tourist would not like to visit Florence, you can try the local product. Differing in original taste.

We assure you, real focaccia is just a poem. And even though in a detailed review walksofitaly.com it was placed only on the 11th line in the list of the most popular Italian dishes, sometimes all you need is this bread, olive oil and a pinch of Parmesan to satisfy your hunger.

The list of what you need to try in Italy from food is unthinkable without carpaccio. Thinly sliced ​​meat or fish slices, seasoned with a sauce with olive oil, balsamic vinegar, lemon juice.

Although the recipe for this dish in Italy appeared relatively recently, today it is included in the menu of all restaurants of national cuisine. For its preparation, most often raw beef tenderloin is taken, previously placed in the freezer.

In Italy, it is worth trying other versions of carpaccio. For example, instead of beef, venison or duck, tuna or salmon may be present.

According to the traditions of Italian cuisine, before serving, carpaccio is sprinkled with cheese and garnished with fresh herbs. Be sure to try the carpaccio with Italian wine.

For example, venison is recommended to be served with red wines: Barolo or Chianti. And tuna or salmon is supposed to be tasted with white or rosé wine.

This Italian national dish is especially well prepared in Naples and Bologna. Although in general lasagna is spread all over the world, it is one of the most popular and well-known Italian dishes.

It is a multi-layered casserole in which the dough alternates with stuffing of minced meat, mushrooms or vegetables, soaked in sauce – the same bolognese. An obligatory ingredient of the dish is cheese: ricotta or mozzarella parmesan, gorgonzola.

Lasagna is something worth trying in Italy. In addition to the classic version with meat, many restaurants offer vegetarian lasagna.

Even if you think that rice dishes are best cooked in Asia, while in Italy, do not ignore the risotto. After all, this food is far from exotic – on the Apennine Peninsula they love to cook and eat it.

The basis for the dish is round-grain rice of special varieties, which is first fried and then stewed. When the risotto is almost ready, seafood, minced meat, vegetables or mushrooms are added to it. And sometimes all together!

In Italy, you can try unusual types of risotto: with apples and pears, berries, zucchini and eggplant, shrimp, bacon, or even truffles. In the latter case, of course, you should not count on cheapness!

This pungent, scarce mushroom is one of the most expensive and coveted foods in the world. And Italy is one of the few countries where it still grows in sufficient quantities.

Truffles grow in the wild, usually found in Piedmont and Umbria. Although there are those who were lucky enough to find a delicious mushroom in the forests of Tuscany. By the way, this is best done by dogs and pigs, which have an accurate sense of smell.

In Italy, there are 2 types of truffle: white and black. The latter is a little more common.

By the way, in October and November, that is, during the mushroom picking season, Italy even hosts international festivals of white truffles. The most famous are those that take place in the Piedmontese Alba and the Tuscan town of San Miniato.

Often truffle shavings are sprinkled on pasta. They are also used in the preparation of omelettes, risotto and meat dishes.

This is not quite ice cream, although it is very reminiscent of it. Real gelato is a national Italian delicacy made from milk, cream and sugar. Nuts, fruits and berries, fruit jams, coffee, and chocolate, candied fruits, honey and much more are added to it.

Gelato is prepared in special establishments – gelateria. The best of them in the season do not know the end of the visitors.

Although we recommend that you do not become victims of advertising and treat yourself to an Italian delicacy in a regular gelateria, where the locals do it. We assure you that the taste of the product in it will almost certainly not be worse than in the hyped colleagues. 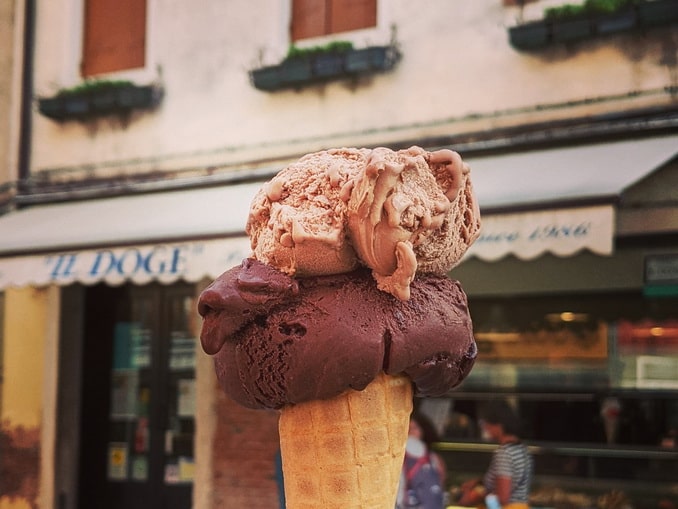 Another Italian dessert, tiramisu, hardly needs a special introduction. He is so famous that everyone has already begun to forget where he comes from.

The secret of the popularity of tiramisu lies not only in the delicate taste, but also in the ease of preparation. After all, to feast on you need very few ingredients: savoiardi cookies, mascarpone cheese, coffee, chicken eggs and sugar. And of course, chocolate chips or cocoa for sprinkling.

The best tiramisu is made in the town of Treviso. Although, in principle, the entire Veneto region is considered its homeland.