Cyprus in October – is it worth going? Weather, water temperature, how to dress and whether it is possible to swim, prices for hotels and excursions 2022. Which of the resorts in Cyprus to choose for a holiday in mid-autumn, things to do – in the review of good Time to Trip.

If most seaside resorts in Europe experience a significant outflow of customers with the advent of autumn, then in the eastern Mediterranean, in Turkish Antalya, and further south, in Cyprus, in October it is too early to think about the end of the season.

And really, why? After all, the sun here does not just warm, but naturally bakes. Rains are rare. And the sea is warmed up to temperatures that only pools in expensive hotels that do not save on guests usually flaunt.

In addition, prices – if they do not fall to the lowest level for the year – are significantly reduced from their summer levels. For everything – even on car rental in Cyprus and tours.

The number of travellers who at that time considered it reasonable to rest on the sea is equally declining!

In a word, there are all conditions for you to think – maybe this is the right and justified step? Indeed, what if?

Weather in Cyprus in October

Still good for a beach holiday. But at the same time, it no longer poses any special obstacles for sightseeing in Cyprus. And long walks along the streets and embankments, even in the daytime.

At the same time, the nature of the weather changes significantly even in comparison with September. If in early October in Cyprus the air temperature during the day can reach +26-28 °C, then towards the end of the month the thermometer tries not to stick its nose above +24-25 °C.

The nights are colder.

It rarely rains – only once or twice a month. And therefore the humidity is kept at a commendable level, never exceeding the mark of 70%.

Note, that in the south resorts of the Cyprus – in the same Larnaca – it is usually the warmest. The second place is occupied by Ayia Napa and Protaras. As for western Paphos, it is traditionally always a little cooler and more windy here.

When visiting Cyprus in the middle of autumn, guidebooks recommend taking jackets and sweaters, blouses and pullovers with you. Since in the evenings and with a strong wind, walking along the seashore or even sitting on the beach becomes a little uncomfortable.

Equally, you will need clothes more solid than shorts and T-shirts when visiting mountainous areas – the same villages and monasteries in Troodos. We recommend you don’t forget to dress a little warmer when exploring such a national park as Akamas. Or when you are about to climb the highest local Mount Olympus.

The sea off the coast of Cyprus in early October is warmed up to + 26-27 ° C. True, not everywhere – such temperatures are recorded in Protaras and Ayia Napa, Larnaca. Partly – in Limassol.

At the same time, Paphos follows its own special course. And the water area near such famous beaches as Lara and Coral Bay or those located in the Blue Lagoon rarely heats up to more than +25 ° C in early autumn. Which, of course, does not interfere with swimming.

Closer to mid-October, the water off the coast of the “Island of Aphrodite” cools down to + 22-24 ° C. And by the end of the month, only the most desperate – from the point of view of the Cypriots – foreigners risk swimming and dipping. For the sea temperature, even in shallow water, almost never exceeds + 21-22 ° C.

50 € per night – absolutely standard price at this time for a short-term rental of an apartment or a hotel room for two vacationers. Sometimes even in the city center! So theoretically you can rent a car only for trips to hard-to-reach places on the island.

In Paphos, pay attention to Niki Court Holiday Apartments. Flaunting at Booking with a rating of 9.5 and, apparently, not experiencing a shortage of guests. Still – a studio of 35 m2 near the Archaeological Park and 400 meters from the port is doomed to popularity!

In Limassol, you should try to book inexpensive but cozy Silver Apartment – Loft for free dates. Which is sometimes difficult to do if you were planning to prepare a trip in the summer, and not in the spring.

Because the 50 m2 apartment has access to a small garden on the roof. And you can walk to the beach in 12-15 minutes. This is nice, because in October you want to walk here a lot!

In Larnaca, for a specified amount, you can rent a small studio a couple of hundred meters from the famous Finikoudes beach. Equally, in Ayia Napa, for fifty euros per day, you can rent spacious flat in the very center of the city – Maria Zintili Apartments. That is, about 300 meters from the coastline!

If you have ever been to Cyprus in the summer, you know that most vacationers simply do not want to do anything other than swimming and looking for shade. For the sun literally bakes furiously, and air temperatures easily rise to +45 ° C and above.

If not in the first, then in the second month of autumn in Cyprus, the weather, on the contrary, turns on the “green” light for a variety of off-the-beach activities and visits to interesting places. And most tourists tend to take advantage of the provided them a chance.

Moreover, the cost of organized excursions at this time is reduced. As well as the number of participants in groups!

So even if you are not staying in Paphos, be sure to go and see its famous Archaeological Park. Then head to Akamas Park and the Blue Lagoon. 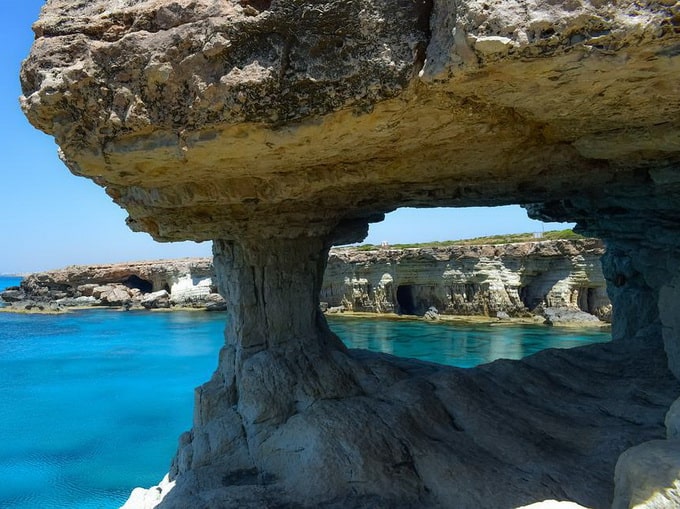 Equally, this city often serves as a starting point for trips to such iconic places of the island as the Kykkos Monastery and the village of Pedoulas.

Just keep in mind when renting a car that the mountain roads here are narrow and very winding. And the movement on them is right-handed, as in the UK or Australia.

In Limassol, you should definitely visit a small but “cool” archaeological museum. And in the vicinity of the city – the ruins of the ancient policy of Kourion.

About 50 km north of Limassol, in Troodos, there are such authentic places as Kakopetria and Platres. You can also stop by the pretty monastery of Trooditissa. Where, judging by the reviews, even the most skeptical tourists are visited by an incredible sense of peace.

The Church of St. Lazarus is a must-see attraction in Larnaca. And no self-respecting diver will miss the chance to dive to the Zenobia ferry that sank in 1980, a few kilometers from the port.

As for Ayia Napa, its very location next to the beautiful Cape Greco, full of arches in limestone rocks, allows you not to think about what you should do first of all outside the beach. Equally, go here and many of those who have a rest in numerous 4- and 5-star hotels in Protaras.