When is the best time to visit Rome? In terms of weather, prices, number of tourists? Features of the seasons of Italy’s capital, air temperature by months, likelihood of rain, how to dress? What you can do in Rome in spring and summer, autumn and winter, where to go in the vicinity – in a story by goodTimeforTrip.

The answer to the question asked in the title may not be as simple as it seems at first glance. In any case, ambiguous.

Since a young and energetic person, who loves movement, indifferent to the heat, as well as the bustle and noise, will undoubtedly say that the best time you to go to Rome is the period from May to September. But the family tourist, and even taught by bitter experience, on the contrary, will declare that he prefers to go to the “Eternal City” in early spring or late autumn.

And he will be right in his own way!

Despite the fact that November is considered the rainiest month in Rome. And therefore, as it were, badly suited for a trip.

However, let’s not jump to conclusions. Instead, let us conduct a diligent study of what spring and summer, autumn and winter are like in the Italian capital? Both in terms of weather and tourist flows?

As well as prices – it’s no secret that rooms in Roman hotels and apartments are quite expensive. Not even in the high season!

From our point of view, this is a particularly optimistic time. Therefore, spring is best suited for a short touristic voyage to Rome. Judge for yourself!

March is off to a slow start here. But the air temperature even at the beginning of the month during the day can reach +12-16 °C. Hinting to everyone that spring has come not only in the calendar, but also in reality!

In the middle of the month, you have the right to expect warming up to +18 °C. And on the threshold of April it sometimes happens even more than +20 °C.

Nights are much cooler: usually +3-10 °C. But so what – during the day you will be able to implement an exceptionally rich excursion program. Moreover, you will have very few competitors!

Rains can spoil a very small number of days – 3-4 per month. The precipitation rate in March rarely exceeds 40-50 mm. So no floods – usually light rains, which an umbrella and thick-soled sneakers can easily handle.

How do locals and tourists dress? About the same as in the local winter – in light jackets and elegant scarves. There are no hats on the heads of the townspeople – the Italians do not like them – but comfortable shoes flaunt on their feet. Which is suitable for a long walk, even on a cobblestone road, even on asphalt!

In 2022, March in Rome started with slightly lower temperatures – until the middle of the month, thermometers even during the day did not want to show more than +13 °C. And at night it even froze a few times.

But then the weather picked up. And starting from the middle of the month, it gave people the usual warmth.

In early spring prices practically do not depart from winter lows. And if you expect to find an apartment for 100 € per night near the center, you can do it! 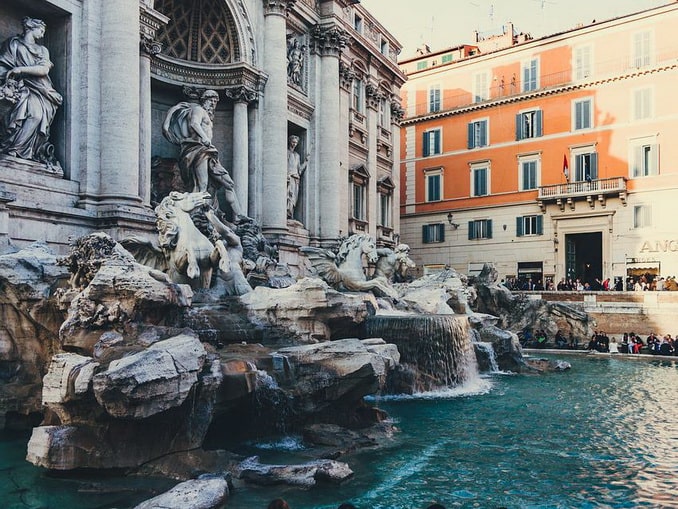 It is true that April in Rome sometimes starts with modest temperatures around +16-18. But by the middle of the month you have every right to count on +20-24 °C.

It rains noticeably less than in March, the probability of a sunny day usually exceeds 60-65%.

The number of tourists is also increasing. And by the Easter holidays (in 2023, Easter is celebrated on April 16), the city is completely overcrowded with visitors.

There are especially many of them near St. Peter’s Square and the Cathedral. From the balcony of which the Pope will bless the entire Catholic world. But the Vatican Museums, as well as other sights of Rome during this period are by no means empty.

Further – more – at the end of spring the local air temperature prefers the range of + 25-30 °C. At the beginning of May, in Rome it is a little cooler. But starting from the second decade, thermometers creep up without ceasing.

At the same time, by the way, it is very cool at night – from +10-12 °C in early May to +15-18 °C – in its middle and end. So if you intend to walk around the “Eternal City” at the end of spring after sunset – and this is a very romantic experience – take at least a light blouse with you.

It’s no secret that May is considered one of the best months to travel to Rome. But obviously not the cheapest – the prices just don’t get to the upper possible threshold.

Traditionally considered high and therefore the most “hot” tourist season in Rome. The period of vacations and school holidays – how can you not take advantage of this chance to visit Italy? And, of course, carefully explore its capital?!

If in the case of the whole country it is easy to agree with such an assessment – who would not want to relax in one of the seaside resorts on the Adriatic or the Tyrrhenian Sea – then we have reasonable doubts about the “Eternal City”.

After all, if in June the weather in Rome still sees the coast, and the air temperature only occasionally rises to + 35 °C, then in July and August real hell begins on the streets. Which, coupled with mostly cloudless days and occasional rains, can ruin the entire trip.

After all, instead of exploring the Colosseum or marveling at the size of the Pantheon, you will be busy only looking for coolness. And the crowds around the Trevi Fountain and other Roman reservoirs will reach such proportions that it is just right to be afraid of being trampled.

Yes, you heard right, despite the promise of wild heat, in the summer the Italian capital sees an incredible number of guests. Who either didn’t care about temperatures under +40. Either they no longer believe any forecasts?

July and especially August are the hottest months in Rome. Naturally, many of the capital’s residents during these periods try to get out of the city or even go to the sea.

Prices adjust to demand – and it is usually high… And you can’t get on a significant discount even in expensive metropolitan hotels at this time of the year. What can we say about the cheap ones, which are simply stunning in demand?!

This is the golden time. Even in early September, the weather in Rome already allows you to breathe normally and take your time to see the sights. You can make long walks without any problems, just trying not to be in the midday hours in the sun.

In 2022, for example, the air temperature throughout the month hovered in the corridor + 26-29 °C during the day. And at night, it carefully allowed tourists to take a breath, dropping into the range of + 20-25 °C.

Yes, this is not always the case. And often right in the middle of September in Rome, wild heat is set at +35 °C. But in the evenings and at night the atmosphere still cools down. Enough so that you can accumulate strength for the next day full of interesting excursions.

It rains more often than in summer. And in the reviews you can sometimes read complaints about excess moisture.

In general, the beginning of autumn in Rome is a dry and clear period. And if you stock up on wide-brimmed hats, long-sleeved shirts, and sunscreen, then commend yourself for foresight.

Moreover, as in summer, you can still go to the coast of the Tyrrhenian Sea. And swim in the noisy and lively Lido di Ostia. Or spend a couple of days in Anzio or Nettuno.

Terracina? Only if you can afford it! 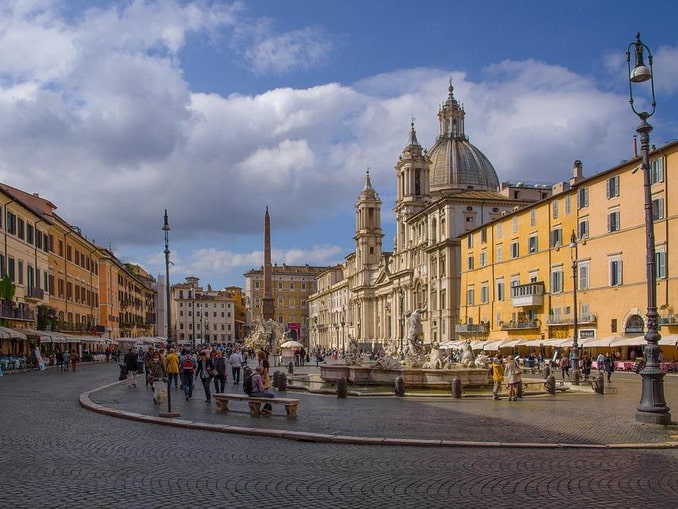 Mid-Autumn in Rome is also great for exploring the city. Visits to literally all of its nooks and crannies and trips to the neighborhood.

Depending on the year, the air temperature in October will prefer the range of +20-24 °C, and sometimes rise to +26-28 °C. Dips to the +18 level are inevitable, but usually do not last more than 5-7 days even in the second half of the month.

Which allows you to constantly walk around in T-shirts, tops and shorts. But, of course, don’t forget when visiting churches and the Vatican, you need to dress more strictly.

And in the evenings, clothes should be even warmer. Indeed, after sunset in October Rome, it gets colder to + 12-14 °C. At the end of the month sometimes more…

At the same time, it does not rain much, nature seems to be saving up strength for November. The dankest month in Rome!

Which, however, does not prevent us from simultaneously recognizing it as one of the most promising months. From the point of view of the traveler.

For the rains are often torrential, that is, salvo character. And they do not seek to spoil several days in a row at once.

And their average rate is not so high as to completely refuse the trip. As soon as you find out how pleasant the local prices are in hotels, the thought settles in your head – to go and by all means.

Because in November the sun in Rome shines regularly. For most of the month, heating the city atmosphere to +15-18 °C. That is, letting everyone understand that at these latitudes they really do not believe in winter.

In general, stock up on a raincoat and rubber shoes. Plan B in case of severe bad weather – for example, you can easily go to see Florence in a day.

And then go on a trip – we assure you, you will not regret it!

The lowest season in Rome. Which should not confuse a thoughtful citizen who has the opportunity to travel. Since, as a reward for a non-standard view of things, he will sometimes get very good weather, a small number of competitors in the fight for tickets and tables in cafés, plus the lowest possible prices. Not so little, especially in our times?!

For example, in December Rome observes not the highest air temperatures in the region of +10-14 °C during the day. But on the other hand, you can no longer complain about the constantly high probability of precipitation.

It rains moderately – no more than 4-5 days per month. So you can plan and implement a rich program of events.

Closer to Christmas and New Year prices, of course, rise. But starting from January 7-8, they drop again. And keep at a low level until the end of winter.

Note that January is the coldest month of the year in Rome. And the average daily temperature is about 10-11 degrees Celsius.

In February, even with the naked eye, you can see a turn towards spring. For although during the day the atmosphere usually warms up to a maximum of +13-15 °C. Sometimes surges up to +18-20 °C are also recorded.