Rome in March – is it worth going? Weather, how to dress, prices 2023, how many tourists, reviews. What to see in Rome in early spring, where you can go in the vicinity and in general – in Italy – in the review of good Time for Trip.

Rome is a top tourist destination in Europe. And in order to understand this, it is absolutely not necessary to stand in line, in the manner of a boa constrictor, encircling the arena of the Colosseum twice or thrice.

Many people can figure it out on their own. But no, so believe me, take my word for it: except for very short periods of time, the “Eternal City” is flooded with tourists!

Moreover, their incredible number will negate all efforts to feel the atmosphere, the spirit of the ancient metropolis. If you need it, of course!

Numerous thick-skinned citizens are not embarrassed by the abundance of competitors. They are ready to squeeze into the colonnade of St. Peter’s Cathedral as part of a powerful human river and will not let themselves be trampled down even by an excursion group from China.

But more subtly organized travelers should be more careful when choosing the time for a visit. And, for example, try to get to Rome in early March. Yes, in principle, it is possible at the end of the month – the main idea is before the Easter holidays.

We assure you will not be disappointed. On the contrary, will see and feel a lot of interesting things: how does the capital of Italy wake up after hibernation and why is its soft beauty so captivating?

And along the way, you can explore the range of stores without haste. It takes time – any tourist can buy a lot of useful things in Italy.

Weather in Rome in March

Will not amaze with especially high air temperatures. It is unlikely that he will allow you to walk in one T-shirt – except perhaps at the end of the month – and will not provoke thoughts about swimming in fountains.

And this is just wonderful! Because you will have plenty of time for excursions around Rome, visiting the Vatican Museums and even trips in Lazio. 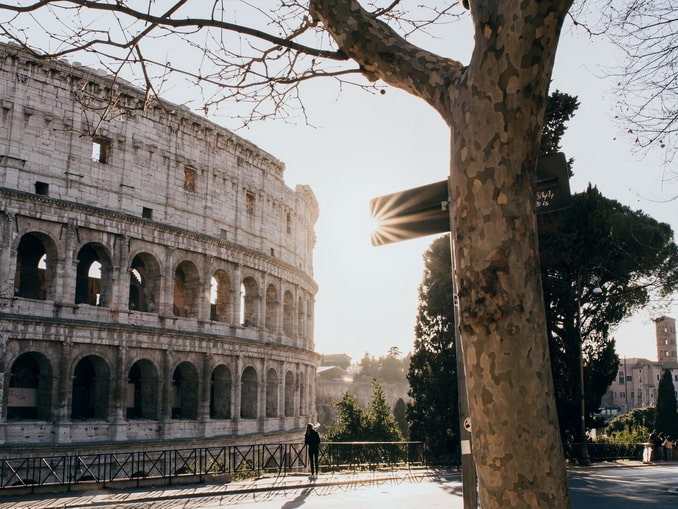 However, Closer to the Topic!

In early March, it is still quite cool in Rome: the air temperature during the day reaches +10-12 °C, at night it is only about +3-5 °C. It is felt throughout that the city has not yet departed from winter.

Although the sunlight becomes significantly more. And the sky of pale azure color clearly hints – summer is just around the corner!

Precipitation is statistically quite abundant. But if you have been in Rome at the beginning of November, then you will agree that the local spring rains are not as stubborn and dull as their autumn versions.

And therefore they are perceived calmly. What’s wrong: the rain has passed, the pavement is washed, there is freshness in the air!

In addition, real heat often comes to Rome at the end of March. Around the middle of the month, the daily air temperature rises up to +15-17 °C. And by the end of it, the metropolitan thermometers will become so impudent that they already show +20-22 °C.

The foliage does not just bloom: cherries and flowers bloom. And the ancient ruins are covered with such a rich carpet of greenery that light filters do not interfere with the eyes. Or at least sunglasses!

How do the inhabitants of Rome themselves dress in March? Yes, about the same as in winter: light jackets, scarves, no hats, comfortable boots on your feet.

Rome is like this – you have to walk a lot here. Even if you are not used to doing it in everyday life.

Keep in mind that March in Rome is a transitional period. In the evening and morning hours, cold is possible, which will require thorough warming. Equally, you may not have enough of a regular T-shirt in a hotel – not all of them are well heated.

Therefore, we advise you to take a far from empty suitcase on the road. On the contrary, put enough hoodies and sweaters inside. As well as lighter clothing – it may happen that you have to walk the streets in a shirt.

Since the average rainfall in Rome for the whole of March usually does not exceed 50 mm. You can expect no more than 4-5 rainy days, and the precipitation is not torrential.

In general, you can easily sit out the inclement weather while visiting such Rome attractions as the Sistine Chapel and the Papal apartments in the Apostolic Palace. And then, without any problems, continue walking through the streets and squares.

Foreign tourists, as far as one can judge from current reviews on the Internet, are infrequent guests in March Rome. Although personally from our point of view and taking into account the low prices in local hotels, as well as private apartments, it is worth taking a closer look at the indicated time period.

Since a little later, on the Easter holidays (Catholic Easter in 2023 is celebrated on April 16), as well as in May, the prices go up by leaps and bounds. Reaching a peak in the summer months.

If you organize a trip to Rome at the very end of March, your expenses will be approximately as follows.

With luck, you can book a room at the Home at Rome Vatican Apartment, which is located about 600 meters from the Papal City, for only 70-80 € per night. Moreover, about 7 € (for two) will have to be paid as a city tax. But is it a big sum for such a successful location?

By the way, breakfast is included in the price!

The Hop On Hop Off tour bus stop is nearby. Yes, and to the railway station St. Pietro you will get in 2-3 minutes on foot.

You will say – the same as always. And you won’t be entirely right. Because during the high tourist season, visiting the Colosseum or, say, the Vatican Museums is still a pleasure. Is it possible to say later that I have been there – it is difficult to enjoy such a visit!

But the beginning of spring in Rome is a different matter! Because you will see exactly what you were going to see. And you will not see endless spins and selfie sticks.

No, a lot of tourists still want to get to the Colosseum in the middle of the day. But early in the morning, the line to get in looks frail and sparse. And in the evenings you can pass the police cordons in ten minutes.

By paying an additional €2 per ticket when booking online, you should theoretically skip the entry line. If the arena is not overcrowded: with 3,000 visitors inside, the entry of the following is suspended.

As for the tour of the Roman Forum, it is worth going here in the afternoon. Tourists spread throughout Rome, leaving you almost the sole master of the ancient ruins.

We buy tickets to the Vatican Museums online for the selected time. At the same time, we remember that if you change your mind or cannot come, the money will not be returned to you in any case.

You can also buy tickets at the box office. But even at the beginning of spring, you will have to stand in line to get started.

On Sundays, Roman museums are closed. But on the last Sundays of the month they are open. And for the most part they let visitors in for free.

But in the popular Galleria Borghese, free admission is organized, on the contrary, on the first Sundays of the month. And when buying a ticket online you will have to pay only about 2 € per booking.

Although you will almost certainly be very busy in March, seeing the sights of Rome itself, we recommend that you often pay attention to the surroundings of the famous city. Indeed, in some places at this time tourists simply can not be found!

In particular, you can visit Tivoli in one day, where the villa of Emperor Hadrian has been partially preserved. The villa of the Dukes d’Este and its luxurious garden with fountains brought worldwide fame to this small town in the suburbs of Rome.

Recently, the residence of the Pope in Castel Gandolfo has been open to tourists. Standing on the shores of the extremely picturesque lake Albano.

Fans of the sea will not miss the chance to ride to Lido di Ostia. Not in order to swim, but in order to breathe in the life-giving air and enjoy the scenery.

We also dare to draw your attention to the cozy town of Viterbo. In the center of which the original houses of the 12-13th century were preserved.

Lovers of antiquity will certainly want to take a ride to Orvieto in Umbria. An absolutely charming place perched on top of a flat tuff rock.

Perhaps you will make and a relatively long journey from Rome. For example, to see Florence, in theory, 1-2 days is enough. But for those who would like to wander around Venice, it is worth adding a little more time to the trip.