Paris in September: is it worth going and what to prepare for? Weather, how to dress, prices 2022 for hotels and excursions. Where is better to stay, what to see in Paris in early autumn, most interesting places in the vicinity – in an article of good Time to Trip.

Paris habitually tops all sorts of ratings of the most popular tourist destinations in the world. Not always, of course – in the summer and winter months, many travelers deliberately go to warmer climes. Neglecting visiting the Louvre and Versailles, walking along the Champs-Élysées and climbing the world-famous tower…

However, in the capital of France itself, at the peak of summer, it is sometimes so hot that you involuntarily think about rescheduling your trip. Another thing – the beginning of autumn! Indeed, in September, Paris is still bathed in sunshine and is in no hurry to meet the cold.

People know about this, and therefore there will be a lot of tourists. But still not so much that because of their number it would be worth canceling the long-awaited trip.

For which, however, it is still worth preparing – at least informationally! As only in this case you will get the best experience from a tourist trip to France!

Weather in Paris in September

Usually the most conducive to a variety of walks and trips. Indeed, in many cases it is no longer hot, but still not cold.

However, it all depends on the year. For example, in 2021, September in Paris turned out to be extremely warm, even sultry. And in the first decade, the air temperature rose several times even above +30 °C – try to take a walk in the red-hot Marais district in such conditions.

And air temperatures in the daytime obediently lived in the corridor + 20-24 °C. Not making any attempt to shock tourists again.

It was colder at night – at times the thermometers showed +14-15 °C. And in the very end of September, Paris at night makes it clear that it is starting to prepare for winter – the air cools down to + 10-12 °C.

Such a forecast is unlikely to frighten a tourist. Rather, it encourages action. Especially if he didn’t forget to bring some relatively warm clothes with him!

Rains are rare, according to long-term statistics, the beginning of autumn in the French metropolis is a rather dry time. Suffice it to say that in terms of the number of millimeters received from the sky, it is in last place among all the months of the year.

2-3 rainy days per month and no more than 40 mm of precipitation in total. You must admit that such weather is unlikely to prevent anyone from seeing famous attractions of Paris in detail.

However, you can count on an immaculately clear sky only in 50% of cases. The weather is often gloomy, and the sun willingly hides behind the clouds.

On the one hand, it is ideal for excursions and sightseeing. And if you plan to go to Paris on your own, you won’t find a better time.

On the other – you still want more sunlight. After all, the sky hanging over your head puts a little pressure on the psyche.

In general, a windbreaker in your vacation suitcase has every chance of coming in handy. As well as a sweater – if you intend to wander a lot in the evenings, soaking up the romantic aura inherent in Paris.

Such things will also be useful if you are planning to travel from Paris for a day to the sea. In Normandy, for example – the same Mont Saint-Michel. Or even Brittany.

It is wiser to leave rubber boots and umbrellas at home. Because even northern France does not bathe in the rain in September. And you can’t even talk about the central and southern ones!

Sunrise time in Paris on September 1 – 7 am, sunset – half past nine in the evening. By the end of the month, daylight hours are reduced by about 2 hours.

Amateur tourists should estimate expenses based on the following prices:

A hotel room for two will take out of your pocket from 90-100 € per day. In this case, the hotel or apartment, most likely, will be located at a decent distance from the center.

If you want to settle down in a “good” district of Paris and are not inclined to skimp on comfort, the costs will rise. How much? Depends on how far in advance you start looking for options.

We recommend Rose Bourbon in the 15th arrondissement on Rue Eglise. As it stands pleasantly close to the Félix Faure metro station and within a reasonable (1.5 km) distance from the Eiffel Tower. Quiet area, you can walk late. The cleanliness of the rooms and the quality of the beds are praised in the reviews.

An excellent choice is the separate apartment Hotel Hélios Opéra in the 9th arrondissement. The Opera Garnier is no more than 1 km away. There are practically no options for the same money in the district.

If you haven’t made it in time, check out the La Manufacture hotel in the 13th arrondissement. Nearby: Place d’Italie metro station and a couple of supermarkets.

The list and description of the main museums in Paris are set out in the corresponding article. Of course, you will not be able to visit them all – at the Louvre and Orsay, Pompidou must be taken at least a day. But you simply must choose the most suitable for you in spirit!

Naturally included in the route of any trip to Paris Champs-Élysées and the Eiffel Tower. Moreover, the first in early September becomes a little more rarefied in terms of the number of people walking. And the second one observes slightly smaller queues for entry compared to summer.

The Cathedral of Notre-Dame de Paris, alas, will be rebuilt after a fire for a long time. But you can still enjoy a beautiful example of flaming gothic. Located, by the way, on the same island of Cite – just look at the incredible royal chapel of Sainte-Chapelle.

Naturally, we would recommend taking the Seine cruise, which is a free experience for Paris Pass holders. And be outdoors more.

Do not constantly break into popular museums. But, for example, take a walk through the Luxembourg Gardens. 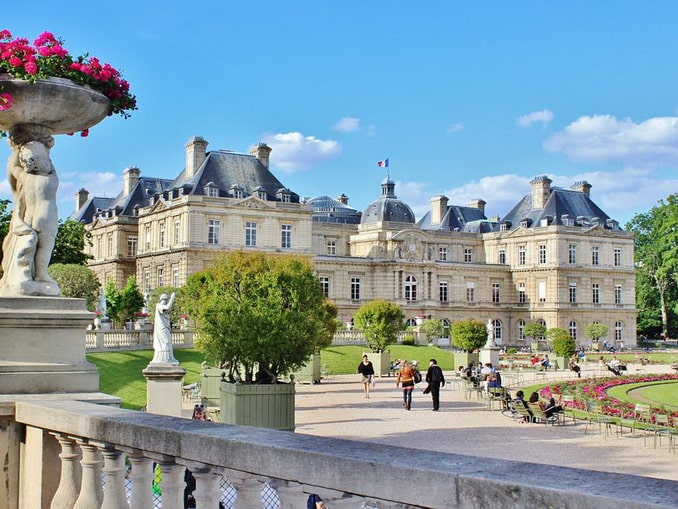 After all, it is especially beautiful in September. Relaxed, clean, fresh, as if resting after the summer heat and unbelievable tourist crowds.

Those with Paris travel dates that fall on European Heritage Days – the third weekend in September – could plan for activities that are virtually unavailable on other days of the year.

For example, (free) visits to the Champs-Élysées and Luxembourg Palaces. The President of the Fifth Republic lives and works in the first, and the Senate sits in the second.

An excellent choice would be to explore the Latin Quarter, literally saturated with history, on the left bank of the Seine. After all, it houses not only the famous Sorbonne, one of the first universities in the world, but also a wonderful Museum of the Middle Ages. As well as the Pantheon and several beautiful churches.

We know you will certainly want to visit the Palace of Versailles and take a walk in the royal park. But at the same time, do not miss other opportunities!

For example, it is worth a trip to one of the suburban castles – the same hunting palace of Fontainebleau. If you are visiting the French capital with children, spend the day at the Disneyland Paris, the largest amusement park in Europe. And on the other, go to see what the safari park Thoiry is.

It is easy to get from Paris to Compiègne and Reims. Road trip enthusiasts will surely appreciate the benefits of traveling in a region like Picardy. And perhaps even get to Arras.

Finally, reach the Loire Valley! After all, the same Blois, the favorite city of many French kings, can be explored in just a day.

And how many of the most beautiful castles in France are concentrated along Loire! There are not even dozens of them – hundreds. And in principle, it’s not a pity to spend a whole day to inspect each.

A good option for a country trip is Rouen and its cathedral, which so admired Claude Monet. As well as incredibly authentic half-timbered houses in the old center.

In general, this seaside town in Normandy is especially beautiful in September. As, in principle, the region itself, traditionally attracting tourists.

A little more laborious is the trip to Etretat, one of the most interesting places in France. And only experienced advocates of independent travel will be able to link it into one route with a visit to Saint-Malo.

Quite adventurous individuals will travel from Paris by train to Amsterdam. Of course, it will not be possible to deal with the Dutch capital in a day. But you can make any routes if planning a trip yourself!