Best French castles near Paris: where are they located and which ones are worth a visit? Description and photos, how to get there, ticket prices and excursions in 2022 – in educational and practical material of good Time to Trip.

We note right away that top castles in France are more palaces than harsh fortresses. The French do not worry about this, inventing a single word: “château”.

And, although at first it is difficult for foreigners to understand why the citadel, replete with towers with narrow loopholes, and the frivolous building in the middle of a regular park with flower beds and fountains are called the same, addiction comes quickly.

Yes, and the French themselves confused everything. Having built such fakes for the Middle Ages in the 18-19 centuries, even a specialist will make a mistake in dating.

An excellent example of eclecticism is the castle of Pierrefonds in the northwestern corner of the coutry, in Picardy. Or the famous Chantilly estate just 40 km north-west the French capital. Where an inquisitive traveler will certainly want to go immediately after visiting the main sights of Paris!

Don’t forget about those numerous French castles that adorn the valley of the main river of France, the Loire? After all, they can also be reached from Paris in just 2-3 hours!

Chambord and Chenonceaux are especially famous – they receive the main stream of travelers. But many other châteaux of the region, in our opinion, are completely undeservedly not awarded even fleeting attention.

And it’s not about the royal residences in Blois and Amboise and the real mighty fortress in Angers! And about Chinon, which is almost forgotten today. But there once – in harsh times – the royal court lodged.

And a small, but very elegant, truly aristocratic Azay-le-Rideau. Or the beautifully preserved Chaumont. In the park of which international garden festivals are held today.

However, we will somehow mention these representatives of French castle architecture some other time – in a more detailed review. Here you will find a description of the best, that is, the main examples of the genre!

It is quite natural that tourists pay attention to them in the first place. And, of course, start with those deployed within the limits served by the RER commuter train system.

And only then notice those that are located in the Loire Valley. Well, or even further away – in the same Perigord, Provence, in general in the Pyrenees.

Because of that we start with

Walking through the halls of the main residence of the French kings, it is difficult to admit that this is also a real château! However, what is – is!

If there was once a royal hunting “house” in Versailles, then those days have passed. The complex has been expanded to an incredible size, even a modern person with an application in a smartphone will get lost.

What to say about the times of Louis? Surely at least once a week the whole yard played hide-and-seek here.

The total length of the garden facade exceeds half a kilometer (670 meters). The palace has more than 700 rooms, 1,252 fireplaces and 67 staircases. It looks at the world through 2 153 windows.

Palace apartments to this day amaze with the luxury of decoration. Particularly stands out the Mirror Gallery, a hall 73 meters long, 10.5 – wide and 12.5 – high. As well as the apartments of the king and queen, whose windows overlook the inner Marble Court.

The easiest way to get to Versailles from Paris is by train – line RER C go to Versailles Château Rive Gauche station. A weekly or monthly Navigo pass will save you a hefty amount of money.

Keep in mind that Versailles is located in zone 4. And Charles de Gaulle Airport is in the fifth…

Note that Navigo will generally turn out to be an extremely useful thing if you are planning to go somewhere from Paris. Yes, and the idea to settle in the suburbs of the French capital economically seems extremely reasonable.

Tickets to the Palace of Versailles and the garden cost 20-27 € – depending on whether you want to watch the musical fountain show. Citizens aged 0-17 years (up to 26 in the case of EU residence) are allowed free of charge: en.chateauversailles.fr/plan-your-visit/tickets-and-prices.

If in Versailles monarchs lived for show, then they went to Fontainebleau to do important business or live as a private person. During the time of Philip the Fair in the 14th century, deliberative assemblies were held in the local castle after the hunt. Where did they decide, for example, questions about the Templars or the war with England.

Francis I hunted and played love affairs here. And Napoleon retired to think about the next campaign.

Fontainebleau is in zone 5, and Navigo is also applicable here. How to get there? Take the train at the Gare de Lyon, go to the Fontainebleau-Avon station, then transfer to bus number 1.

The official site is surprisingly clear and informative. Note, that there is an English version of it. Where the schedule of trains and buses is also posted! 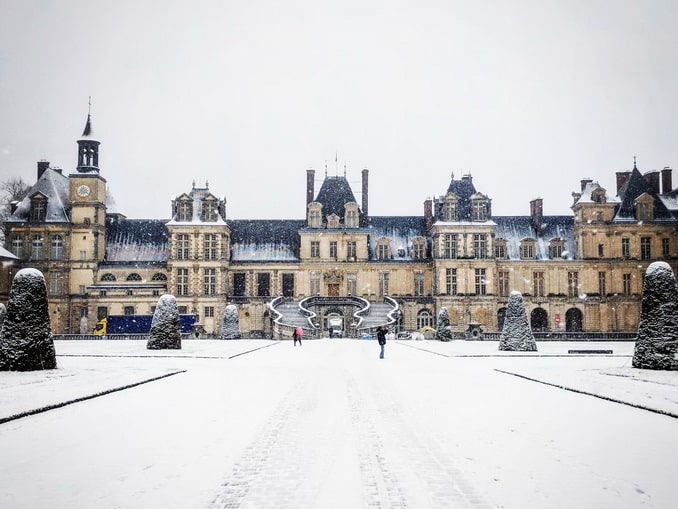 Not as famous as the first two, but unique in its own way. Firstly, it serves as an instructive story from life on the topic of pride. Secondly, this is the first castle in France that had purely representative functions. And completely devoid of defensive!

In addition, it is believed that it was a visit to Vaux-le-Vicomte that prompted Louis XIV to create a grandiose residence at Versailles.

Along the way, of course, the owner of the estate was imprisoned for embezzlement. And all his property was confiscated.

Getting to Vaux-le-Vicomte in 2022 is easy enough!

Firstly take the train from Gare de l’Est to Verneuil l’Etang station. Then sit in the bus shuttle, which takes us directly to the gates of the estate.

The bus ride, however, as shyly stated on the official website, will have to be paid in cash.

Conde – this surname is well known to those who are even familiar with the work of Alexandre Dumas. So, the estate of Chantilly belonged to the younger branch of the Bourbons for two centuries. Beginning around 1632.

Although, for example, the grandiose New Castle is a relatively recent building. After all, it was erected on the site of the family palace of the Dukes of Montmorency at the end of the 19th century.

However, it does not matter: the builders did their best and reproduced all the main architectural forms of the “Gallant Age”. Inside – a magnificent selection of paintings by masters of classical painting. The size is inferior only to the collection of paintings of the Louvre.

To get to Chantilly, you should go northwest of Paris. Train from Gare du Nord to Chantilly-Gouvieux (25 minutes) or RER-D (45 minutes) to the same stop. Next, take the DUC municipal bus or walk 20 minutes: chateaudechantilly.fr/acces/.

This previously unremarkable estate was glorified by the name of Napoleon Bonaparte. It was in Malmaison that the first emperor of France built a private family nest together with Eugenie Beauharnais.

Today, a state museum functions within the walls of the château. And it is dedicated to the private life of Napoleon and the Beauharnais family that became related to him.

You can get to Malmaison from Paris by metro (line 1) or RER train (line A). First you need to get to the La Defense station, and from there transfer to bus number 258.

Entrance ticket to the château with an audio guide costs € 6.5, visitors 0-17 years old visit the museum for free. Malmaison is open daily except Tuesdays, December 25th and January 1st: musees-nationaux-malmaison.fr/chateau-malmaison/informations-pratiques.

Today’s Pierrefonds is partly a decoration. The ancient castle, built in the 14th century during an assault, was destroyed three centuries later by the guards of Cardinal Richelieu.

After that, the fortress stood in ruins for two centuries. Until it was bought by Napoleon I, as they say, fascinated by these ruins.

In 1848, Pierrefonds was recognized as a historical monument. And in 1857, the architect Eugene Viollet-le-Duc finally took over it. Which, as his contemporaries claimed, “restored all of France”. By order of Napoleon III, who became emperor, the architect revived and Pierrefond.

There are many of them – to visit at least a dozen it will take a week of time. And a personal car! Many French people, as well as Americans, British and Germans, however, like this idea.

Moreover, it allows you to develop your own unique route. Moving away from the official recommendations about which castles in the Loire Valley to see first.

is the main pearl of French castle building. Unlike most others, it has retained its marvelous Renaissance appearance unchanged.

The complex was ordered to be built by King Francis I. Moreover, Leonardo da Vinci himself was allegedly involved in the design!

Most sources indicate that the choice of the place for construction by the monarch was not accidental. As if the king wanted to live near his mistress from the Rogan family.

This ignores the fact that Francis I rarely visited Chambord. True, he liked to hunt here, and then demonstrate the architectural miracle to foreign diplomats and sovereigns.

By the way, the castle was finally completed only under Louis XIV. In the autumn, sometimes lodged here with a small courtyard – in October Paris and then it was already cool.

Getting to Chambord from the banks of the Seine, by the way, today is easy. As a distance of about 180 km is covered by a car in less than for 3 hours. Not far from the castle there are also paid parking lots (4-6 € per day).

Note, that renting a car in France is as easy as shelling pears – if you are ready to spend from 35 € per day. Yes, and gasoline in Europe today costs decently.

The train departs from the capital’s Austerlitz station and arrives at Blois-Chambord station. There, travelers change to a bus shuttle (runs from April to early November), or a regular bus number 2: www.chambord.org/en/plan-your-visit/getting-to-the-palace/.

This French chateau has a successful, downright unique location – it literally stands across the Cher River. But it does not prevent its flow in the manner of a dam – on the contrary, it “jumps over” thanks to the arched bridge supports.

For example, Diana de Poitiers, the mistress of Henry II, owned it for a long time. And then it went to Catherine de Medici, the mother of three monarchs of France at once. In his youth, the future “Sun King”, Louis XIV, played in the local luxurious garden.

Chenonceau is located 25 km from Tours and 215 km from Paris. You can’t get here directly from the capital by public transport.

First, you will have to take the fast TGV train at Gare Montparnasse and ride to Tours. Then continue on the regional train to Chenonceaux station. The latter is located 400 meters from the entrance to the estate. 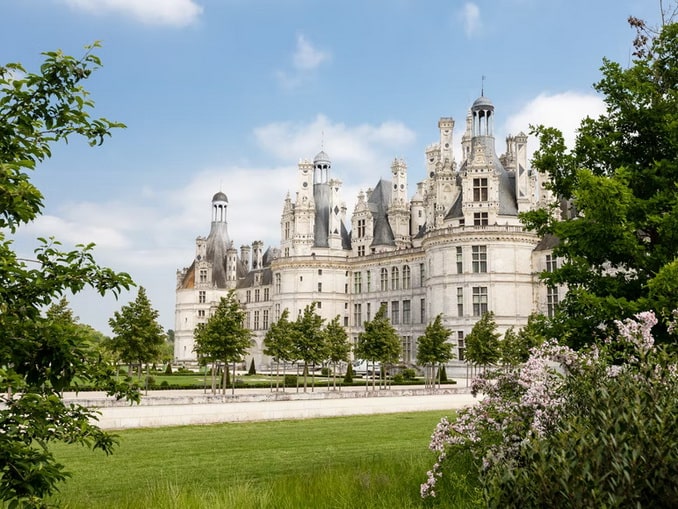 It is inferior in popularity to the two above, but a connoisseur of architecture will be delighted. Over the centuries, the kings have tried, adding and rebuilding the Blois castle, but not completely destroying the old.

As a result, the complex will introduce you to both the Romanesque and the Gothic, both the Renaissance and the Baroque. And not on a penny scale – it’s rightfully considered the largest in the region.

In the chambers of the castle lived 7 kings of France and 10 queens. Including those remote from the court.

The easiest way to get there is by train departing from Parisian Austerlitz. Travel time ~1.5 hours. It takes 10-15 minutes to walk from Blois station to the castle.