Antalya in September – is it worth going? Weather, water temperature, hotels and excursions prices 2022. What to do in Antalya in early autumn, where you can go – in an article of good Time to Trip.

It is paradoxical, but true – with the advent of September, resort life in Antalya not only does not stop, but receives a new impetus. The contingent of vacationers is changing, it’s obvious: the children went to school, and their parents went to work.

But tourists in general are not becoming much less. And prices are in no hurry to decline just because the calendar autumn has come!

And there is a simple explanation for this. Even a few!

Firstly, the weather is getting a little milder compared to its summer version. Which is rather harsh in terms of heat and high humidity.

Secondly, the sea is in no hurry to cool down.

And thirdly, all leisure centers and water parks continue to work as if nothing had happened.

In principle, these reasons alone should be enough for you to start packing your suitcase for a seaside vacation. If you have enough patience and plan a vacation in Antalya for the second half of September, get the fourth and fifth.

Namely: a reduced number of holidaymakers on the beaches and (already) significantly more modest prices for tours, hotels and excursions. Both around the city and – attention – to Cappadocia itself!

Yes, and the cost of car rental around this time also begins to decline. And for 20-25 € per day you can rent something like a Renault Clio with an automatic transmission. And free cancellation – suddenly plans change – in more than 24 hours!

However, let’s talking about everything in order!

Weather in Antalya in September

In a broad sense, it is optimal from the point of view of recreation at sea. Allows you to swim and sunbathe a lot.

Unless, of course, you took at least sunscreen. And know what hours are best not to appear in the open sun.

At the beginning of September 2021, the air temperature in Antalya during the day easily took the bar at +30 °C. At night, the atmosphere cooled down to at least +25.

In the middle of the month, there seemed to be a turning point. Because street thermometers moved into the range of +27-29 °C during the day. And showed +21-23 – after sunset.

But then, as if someone had thrown firewood into the stove. And the sun continued to bake in a perfect summer key. In any case, the third week of the month passed under the sign of temperatures above +30 °C.

The end of September in Antalya, however, almost always signals the arrival of a real (by local standards) autumn.

That is, during the day the weather is still holding, and the air sometimes warms up to + 27-29 °C. But the nights let tourists know that throwing a blouse or jacket over your shoulders may not be superfluous – up to + 18-20 °C.

It rains very infrequently – a day or two for the whole month. Yes, as a result, only they turn out to be cloudy – frankly clear days in the first month of autumn are overwhelmingly here.

Humidity rarely rises to 75-80%. Which makes it possible to endure the heat without consequences!

Even for people with delicate health. And vacationers of those age groups that are forced to regularly monitor their pressure and breathing.

Obviously, such weather in every possible way contributes to a beach holiday. But it is better to go on excursions, as well as independently explore Antalya during this period, in the evening hours.

Plan your suburban trips with caution as well. At noon, it’s hard to climb to Termessos or sit in the amphitheater of Aspendos, which accumulates the sun’s rays. 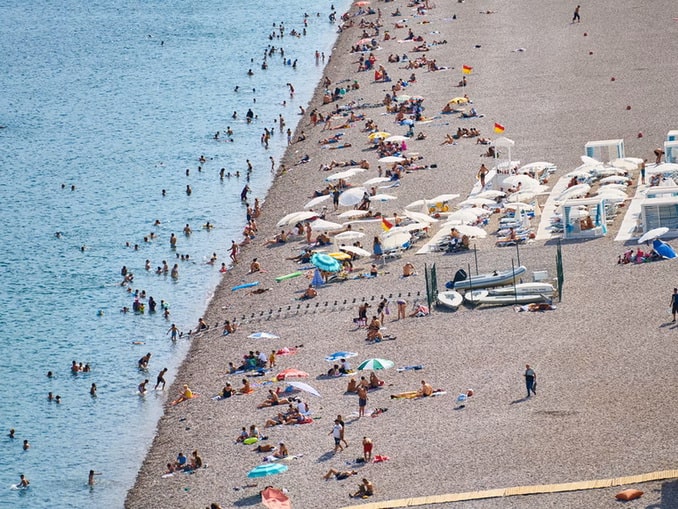 Both at the beginning and at the end of September, the sea in Antalya is warmed up to values ​​that allow representatives of all age groups to swim. Both children who have barely learned to walk, and deep pensioners.

If in the first decade of the month the water area near the coast is warmed up to +27-28 °C, then in its middle it cools down to at least +26.

You can not get out of the water in Antalya and on the threshold of September. When the sea cools down to “only” + 25-26 °C.

In any case, you should always remember about the destructive effect of the local sun on the skin. And try not to dip in the time interval from 11.00 to 17.00.

Even if you take the trouble to carefully apply sunscreen after every swim!

If you would like to stay in the center of the old city, but still have a modest budget, here is an inexpensive option for you – Kaleiçi Ozkavak Hotel. A room for three costs only 60 € per night, all attractions can be reached in a few minutes.

At the same time, this hotel is located on a quiet street. And you do not have to complain about the noise from the tourist river “flowing” under the windows.

You will say that this is not why you are going to Antalya in September and would like to settle closer to the beach? Perhaps not urban, but sandy and spacious – for example, in the Lara area?

In this case, you have to spend much more. Since a double room in an inexpensive but clean Pure Blanche Hotel you can rent for no less than 90 €. However, breakfast is included in the price, and you can go down to the sea by the hotel elevator.

As for excursions, an introductory walk around the city will cost 30-35 €. Long tour visiting the ruins of Perge and Side, a stop in Apsendos costs from 50-55 €.

Do you want to build routes and see the surrounding attractions on your own? Without the help of a guide?

As mentioned above, renting a small car will require an investment of about 20-25 € per day.

Plus you have to spend money on gasoline. The prices for which in Turkey are still lower than in Europe – from 1.25 € / liter.

You won’t be bored – that’s for sure! Equally, you will arrive with your children, or will go on vacation together with your lover (spouse)

In the first case, the lion’s share of the time (outside the beach) would be spent on the Aqualand Antalya Dolphinland slides.

Judging by the reviews, not the best similar institution in Turkey. But not too expensive! And, in addition, combined with a dolphinarium.

Vacationers praise the city oceanarium. Well-equipped and guaranteeing a lot of positive impressions.

If this is not enough for you, we recommend visiting the entertainment Aktur Park. Whose rides are invariably liked by children.

Someone will want to visit the Antalya Zoo. Moreover, in September, its inhabitants begin to behave much more actively than in summer.

We advise adult tourists to roam the streets of Kaleici. Take a ride on the local Kaleici Panoramic Elevator and admire the view of the small but neat city port. See the Hadrian’s Gate and enjoy the panoramas from the observation deck of the Hidirlik Tower.

There is an excellent Archaeological Museum in the city. And nature lovers should take a ride to the nearby cascading Duden waterfalls.

Places of application of tourist interest near Antalya, and far from it – in abundance!

Let us first mention the ancient city of Termessos. At one time, it did not surrender to Alexander the Great. But withered about a millennium later, apparently due to an earthquake.

It is remarkable that the shovels of archaeologists have not yet reached him. And you can feel like a pet opener if you dare to climb the mountain to get to Termessos.

Only – this is important – don’t climb the mountain at noon. It’s still very hot here in September.

We recommend visiting the top of Tahtali, the highest mountain nearby (just take warm clothes). And feel nirvana in the bay, where the ruins of another ancient city, Phaselis, lurk.

By the way, you can go here not only by land – yacht cruises regularly depart to Phaselis from the port of Antalya. And sailing – you will agree – a separate pleasure.

Bus excursions to Demre, to the church of St. Nicholas, are extremely popular even at the beginning of autumn.

As well as the ones to the ruins of the Lycian Myra located in the vicinity of the town. Or to the island of Kekova, near which the ruins of an ancient flooded city are visible in the water.

Perhaps this is where the legend of Atlantis came from? Unlikely, of course, but who knows?

Looks quite natural the desire of tourists to personally visit Perge and Side, Aspendos. As well as enjoy the pristine beauties in the Köprülü Park.

The list of popular long excursions is dominated by those that promise to take holidaymakers to Pamukkale. One of the main attractions of Turkey, which is in high demand even out of season.

Some routes include a visit to Lake Salda. Incredibly picturesque salty reservoir, unofficially referred to as the “Turkish Maldives”.

Two-day tours from Antalya to Cappadocia also have their fans. By the way, they are usually eventful. The program also includes hot air balloon flights.

Few tourists in September dare to visit Istanbul. Since even in the case of a flight, such a trip looks like an excessively tiring event. And quite expensive one!