Vaporetto – what does it mean for Venice? Description, how to use, routes, ticket prices in 2022. How to get to San Marco and Murano, San Giorgio Maggiore and Lido by vaporetto from Piazzale Roma and Santa Lucia station, the Tronchetto ferry terminal and the airport – in the overview of good Time to Trip.

There is an opinion that Venice is a small city, which should be traveled exclusively on foot. And on the Internet you can even find reviews with specific numbers advocating this course of action.

It seems that from the station to the Rialto Bridge you will have to walk no more than 20 minutes on foot. And from there – 10 more – to Piazza San Marco and the Doge’s Palace.

In theory it looks acceptable, but in reality everything is more tiring. And therefore, if you did not initially set your sights on a walking tour of La Serenissima, we recommend not give up the opportunity to save strength.

You will need them for long walks and patiently waiting in line for the gondola. As well as visiting the top attractions of Venice. Which are sometimes located far away from each other .

In short – this is the public transport of Venice. A natural substitute for buses and trolleybuses, trams and metro in local realities.

Visually it looks like an ordinary rather large passenger boat. On the nose of which the route number is written, and on the sides there is the name of the control campaign – ACTV.

Seating is available, but you will have to stand more often. And try to be not in a glassed-in saloon, but on an open deck. For the panoramas passing by are worth it

The board of the vessel, which should be settled, is determined in advance, referring to the tourist map. You can buy it, for example, right at the station – for only 3 €.

Stops of vaporetto look like kiosks. Inside there is a small waiting room, cash desks, the timetable is posted on the walls. Passengers get inside through the turnstile by attaching a travel card or ticket to a reader, the so-called validator.

Pay attention to the route numbers (posted in a prominent place) that serve these kiosks. There are four or five of them on the waterfront near the Santa Lucia station. And it’s easy to get confused!

A distinctive feature of the vaporetto: a strong guy or even a lady. Which, at each stop, pull the ship to the pier with a rope and lower the gangway-parapet. On which crowds with suitcases can move in the chosen direction.

Sometimes mooring operators check tickets by applying them to a special reader. This is rarely done! For 2-3 days of traveling in Venice, you may encounter control only once.

Vaporetto No. 1 – a route starting from Piazzale Roma. It follows the Grand Canal with stops near: Ferrovia (Santa Lucia Station), Rialto Bridge, Accademia, Santa Maria della Salute, San Marco and Doge’s Palace. And eventually arrives on the island of Lido.

It is recommended to tourists as the best by all official local guidebooks. At the same time, you will rarely see a message to inform you that the boat following this route is mooring at EVERY berth in the direction of travel.

That is, an unacceptable amount of tourist time leaves! The trip to Piazza San Marco lasts 45 minutes – it’s faster to walk!

Route number 2 is much more convenient. It also goes to San Marco, but much faster, because it does not land every 2 minutes.

Can pick up tourists not only from the station and Piazzale Roma, but also from Tronchetto. Where is the ferry terminal and a huge car park.

Route №2 doesn’t stop at Salute! Therefore, to see the Basilica of Santa Maria delo Salute and walk around the beautiful Dorsoduro area, you need to get off at the Accademia stop.

Along the way, you can admire immortal paintings at the Academy Gallery, the main city art gallery. And then go to the Peggy Guggenheim collection.

Note that the “deuce” goes both along the Grand Canal and along the Giudecca Canal. Allowing you to reach the island of the same name and the Church of San Giorgio Maggiore.

Out of habit, it is easy to choose the wrong direction. And instead of contemplating the main palaces of Venice, go to admire the expanses of Giudecca. Therefore – be careful!

Number 3 will help you get from the station to the island of Murano. But a boat with the number three on the bow does not go to Burano and Torcello! These islands are served only by № 12!

Vaporetto 4.1, 4.2 will arrive in Murano after a series of stops on the “back side” of Venice, at Fondamente Nova. Along the way, they swim to the islet of San Michele, where the local cemetery is located.

No. 5.1 and 5.2 – circular, allow you to get from the station and Piazzale Roma to the Lido and back.

The second goes in the opposite direction – through the Cannaregio channel and further along the northern side of the main island.

Both do not enter the Grand Canal. But they make a stop at San Zaccaria. 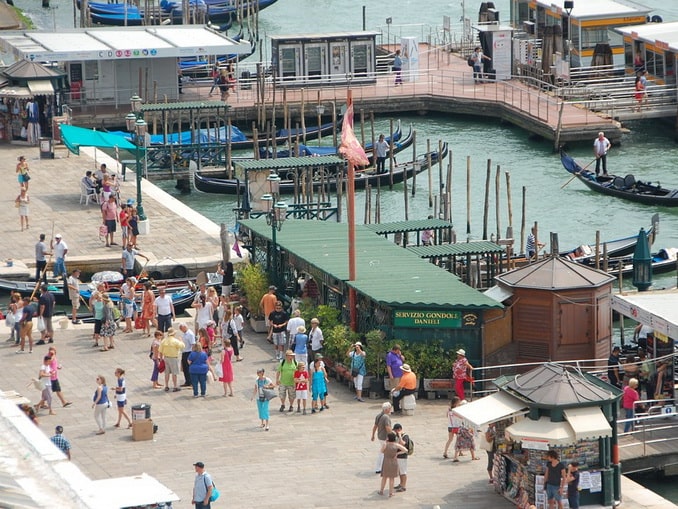 Facilities and number of passengers

There are many passengers on popular routes No. 1, 2, 3. Do not think that you will sit cross-legged, looking at the passing landscapes!

Seating takes place here in flight, just like in the London Underground. And it is not customary to give up a chair to children, such politeness is not in fashion.

By the way, there are toilets on board. And you don’t have to pay extra to visit them. Surprisingly, such a service in Venice itself costs 1.5-2 €.

Real rush hour: everyone sits and stands literally on each other’s heads. Wearily holding on to the handrails and not reacting to the beauty of the surroundings.

Everything is transparent here. 7.5 € for a single ticket, valid for 75 minutes from the time of validation.

Discounts are not provided, pensioners are no exception. The passage of children on the vaporetto is regulated by the following rule: 0-5 years free of charge, then on a general basis.

If you expect to drive twice in a designated period of time, moderate your ardor. These boats do not fly like rockets and stop at all designated stops.

It makes sense for residents of Venice and the Veneto region to buy this card (10 – 40 €). But foreigners – no!

Since they will have to pay 100 € for the right to purchase tickets for water transport at a discount: actv.avmspa.it/en/content/prices.

Passengers aged 6-29 can apply for a Rolling Venice discount card – this requires a passport or ID. After that, the subscription will be sold at a discount: 29 € for 3 days.

Similar Vaporetto passes that include a trip to Marco Polo Airport (round trip) cost:

With Rolling Venice it will be cheaper: 41 € for 3 days. Read more: veneziaunica.it/ru/e-commerce/services.

The route map is here: actv.avmspa.it/sites/default/files/WEB_mappa_linee_di_navigazione_marzo_2018_A4_venezia_official_APP.pdf

You can calculate the duration of the trip from the airport to San Marco, Rialto Bridge, Murano or Burano using the timetable posted here: alilaguna.it/en/timetables.

A vaporetto sails to the pier at Rialto in 55 minutes, to San Marco in 1’15 (Linea ARANCIO).

On the BLU line, boats take a shorter route (38-40 minutes) and moor at the pier on Fondamente Nova.

The cost of a single ticket for a vaporetto from the airport to Venice or Murano is 8 €.

We stuck this paragraph right here for a reason! You need to understand that the frequency of your communication with the vaporetto directly depends on where you settle in Venice.

For example, the San Polo area is within walking distance of the Santa Lucia station. And it’s easier for everyone arriving by train and metro to roll their suitcases to the hotel in 10 minutes than to wait for a boat.

Stay here in an apartment – a luxurious, although not too budget choice

From 115-120 € per night (plus city tax) is usually required by the owners of the Sant’Agostin Apartment with two bedrooms and a kitchen.

Accommodation in an apartment with a common name here – Casanova – but for 3 people will cost almost the same amount.

Accommodation in the Cannaregio area, adjacent to the station, is popular with both those arriving by rail (bus, car) or by plane. Since the Alilaguna A route, following from the Marco Polo airport, cuts this area in two. Then flows into the Grand Canal and moves straight to San Marco.

Here we tend to recommend Casa Palazzi with two bedrooms and even a balcony. And Apartments Cannaregio & Dorsoduro with their own, cozy courtyard.

Remember that the “City of Canals” is an extremely popular destination. Even on off-season weekends and holidays it is almost overwhelmed by arriving Italians.

Inexpensive and good hotels are sorted out 3-4 months before the desired dates, and therefore … well, you understand.

The retreat, however important, is over. We continue… about the vaporetto!

What you need to know

Note that it is not always possible to get by with a single vaporetto trip. If Murano can be reached by №3, only number 12 goes to Burano, departing from Fondamente Nova. To which embankment from the same station, by the way, you still need to come.

It makes sense to take a photo of the timetable of water trams in advance. To understand whether and where to run when transplanting. Since not all routes depart from the same terminal.

For example, you arrived in the evening from Burano to the Faro (Murano) stop. From another berth literally in 1-2 minutes departs vaporetto boat № 4.1 (not direct to the station).

Someone would run and make it. But if you are going to Santa Lucia, it is wiser to wait for the non-stop boat with number 3 on board. Because in the end it will turn out faster! 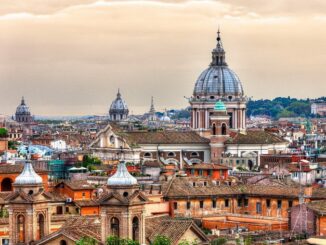 What to visit in Rome? 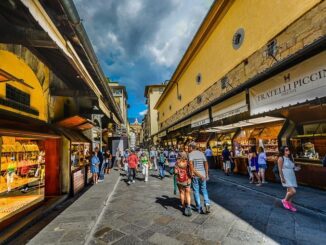 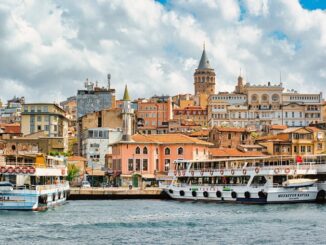 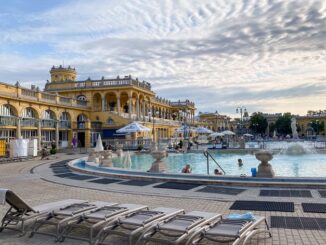