What to see in Treviso in 1 day or more? What attractions to pay attention to? How to get there, where to eat, what to buy as a memory of your visit? Where to stay in Treviso and where to go in the vicinity – in the article of good Time to Trip.

Treviso is usually listed in travelers plans as a transit point. Indeed, near there is the Antonio Canova airport, where flights of large European low-cost airlines like Ryanair, EasyJet land.

Most of the tourists, after landing, take the suitcase by the handle, go to the station, go straight to Venice. Smaller – briefly delayed.

After all, there is a rational grain in seeing Treviso and its sights at least in a day. Since the city is large enough.

Only a microscopic number of travelers stay in “Little Venice” for a longer period. Intentionally making it a base for exploring Veneto. One of the most interesting region of Italy.

After all, it is easy to get to Venice by car or train from here. As well as to Vicenza, Verona, Lake Garda and Milan.

If you wish, you can go to Padua. Or to visit Ferrara, even though it is located in Emilia-Romagna!

This name stuck to Treviso and is used by literally everyone today. The abundance of water, canals and bridges suggests comparison. However, upon closer examination, it turns out that the similarity is not too strong … And is there any at all?

Venice is the sea. Entered the lagoon and channels between the islands, and settled there. There is no need to talk about any turbulent currents. If we are not talking about the wake from a fast boat.

Treviso is built on the banks of active mountain rivers. Despite the fact that the city stands on a plain, the local Sile and Botteniga show such an onslaught, as if they were specially hired to destroy.

On the arches right in the channels stands the facades of some houses. It’s amazing how they haven’t collapsed yet due to such river activity.

The water creates eddies around the columns, but there is no hint of a roll. And so for several centuries – perhaps their builders knew a special secret.

By the way, there are also dams here. They were provided to protect the city in case of floods. So far, they have coped: in Venice floods in November put residents and tourists in knee-high rubber boots. But here – no!

One ancient mill wheel has also been preserved. It is still spinning from time to time, pleases foreigners. 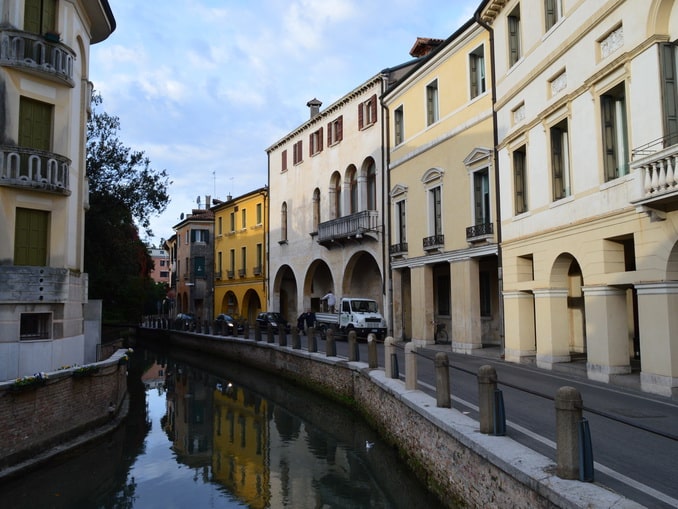 When we start talking about what a traveler should see in Treviso, it becomes boring. Actually!

The city is not so small – 100 thousand inhabitants – but the places that are really worth visiting can be counted on the fingers of one hand. Although, however, it is widely believed that you just need to walk around Treviso. Absorbing his aura and literally enjoying being!

Let’s start with the city walls. The remains of which surround the old city from the north. The banks of the river Boteninga, which once served as a moat, have been turned into a kind of zoo. Fat geese and ducks, swans swim in the water and are not afraid of anything. On the islets, rabbits jump with might and main.

The locals don’t notice them. Tourists, on the other hand, forget about churches and frescoes and are ready to study the events on the city “farm” for hours. Having admired, enter through Porta San Tomaso into the core of Treviso.

Palazzo dei Trecento or “Palace of the Three Hundred” in Piazza dei Signori – the seat of the city council. XII century, looks impressive. Real Italy and the main attraction in Treviso… So you wait that the condottieri run out of the door!

Inside you can get on the old staircase leading directly to the second floor. Look at the frescoes and coats of arms on the walls of the main hall, marvel at the incredible height of the room and the beauty of the ceiling. Restored, by the way, after being hit by a bomb during World War II.

At least out of respect for age – the 13th century – let’s take a look at the Loggia Dei Cavalieri. And marvel at the excellent state of the building of Romanesque architecture.

A couple of ancient churches: St. Francis and St. Nicholas are also amazing examples of the severe Romanesque style. Massive volumes, simple brickwork, simplicity in everything. And real greatness – in the old days they knew a lot about true beauty.

Treviso Cathedral is far from old. On the contrary, its classical portico of graceful proportions dates from the middle of the 19th century.

You should definitely go inside – the atmosphere of Catholic churches in Italy shakes with its solemn calmness. That’s where it’s good to think!

Nearby on the square stands a nice residential building, a typical house in the Renaissance style. If you have time – just wait and see. By the way, there is also a wonderful gift shop nearby.

In Treviso, in general, there are many old houses, whose history is little known. But the look is very attractive.

And by the way, there are a lot of arcades on the streets – almost more than in Bologna. So you can wander here also in the rain!

And look at the water for hours – the spectacle is mesmerizing. Just stand and look.

The best place to watch the water is the bridges of the Buranelli urban area. Through which the Canyan arm of the Botteniga flows. At the end, it flows into the river Sile. And the place is famous – it was mentioned by Dante in his Divine Comedy.

In the 19th century, the old bridge was demolished and a new one was put up. It does not catch the eye in any way, only it is indicated on the stele –

The little crossing was named after the great poet from Florence in 1865.

The beautiful bastion of San Paolo, which Google tends to call as Castello Romano, adorns the steep bend of the river Sile. The purpose of the structure is unknown, it is impossible to get inside… But it looks spectacular, the marble plaque with the Venetian winged lion reminds of the previous owners. 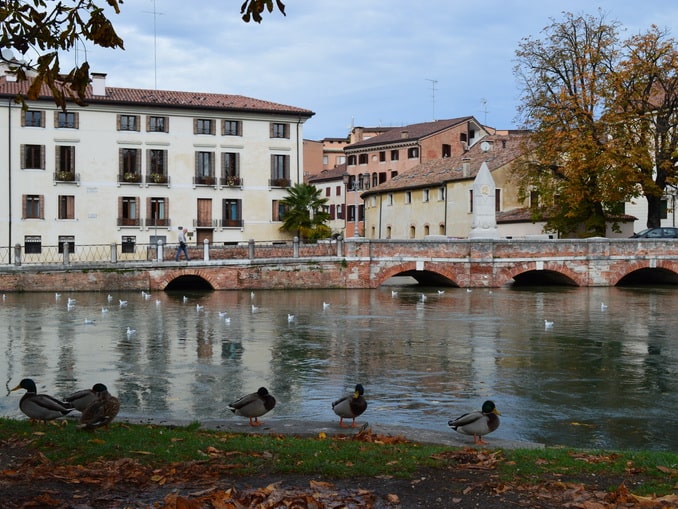 We strongly advise you to stay in Treviso at least for the night. To rest from the road and put thoughts in order before further throw.

Moreover, local hotels, in comparison with Venice, are just an example of price altruism! And you can settle in the city center for money that in “La Serenissime” would not even talk to you for.

Pay attention to the B&B Hotel Treviso – very clean and tidy. The Dimora del Teatro design apartments in a pretty house next to the Church of St. Stephen also look neat. And they just beckon MyPlace Treviso Vittoria Apartments. From which, it seems, literally 5 minutes to the station!

There are plenty of places to eat. You can either take a piece of pizza to go (1.5-2 €) or eat a plate of pasta (from 6 €) inside. In the latter case, a minimum of 1.5 € will be included in the bill for the appliance – Italians do not rely on the generosity of tourists.

The main problem is that the local catering closes for a kind of siesta at 13-15 hours. And during this period, food can only be purchased at McDonald’s. Cafes open again at 17-18 hours – the townspeople slowly begin to catch up for dinner.

Gelateria do not close for lunch. But gelato, albeit very tasty, will you not be full?

Another issue is the lack of public toilets in Treviso. Paid one is only at the station, free – only at McDonald’s. In stores, they are absent in principle – why, because tourists do not go here? In cafes and restaurants, you will have to order something first…

What and where to buy

There are several chain supermarkets. CONAD flaunts the most democratic prices – the traveler will be impressed by the local cheeses and wine.

The only PAM store in the city has an excellent alcohol department with impressive discounts. You can buy everything that is usually bought in grocery stores. From milk and bread, chocolate and cookies to water and alcohol.

You should definitely try the locally produced prosecco in Treviso – this is an extra-class sparkling wine. Look for the inscription Spumante Superiore Extra Dry on the label – it is produced in the vicinity of the city. And take it. For very little money: 5-8 € per bottle.

Treviso is a tourist hub on the way to Venice. When you land at the local airport of Antonio Canova, consider that you are already looking at the Grand Canal.

There are regular buses from the local airport to “La Serenissime”. Mobilitadimarca number 6 can also take you to Treviso Station. From which trains depart regularly to the Venetian Santa Lucia.