What to see in Rome in 2-3, 4 days or a week? Attractions, walking routes, ticket prices 2022, how much do excursions cost? How to plan a trip to see the most interesting places in Rome, what to visit in the vicinity – explore Good Time for Trip.

Rome – the Eternal City. Perhaps not only because of its age!

After all, no matter how many times you come here, a feeling of satiety and boredom will never visit you. Rather, you feel joy. It’s like meeting an old friend for whom you feel sincere sympathy.

However, such emotions usually come on the second and subsequent visits. For when a traveler comes to see Rome for the first time, he is chiefly fussy. And then for a long time brings scattered thoughts into relative order.

To avoid this, it is better to develop logical routes in advance that allow you to see not only the most popular places in Rome. But also some others.

Thos, where tourists do not crowd each other in an attempt to get closer. And the words of the guide do not drown in a multilingual hubbub.

By the way, in order to avoid immersion in a crowd of people, you should think carefully about which month to go to Rome. Because in others ones you will not be up to sightseeing.

The correct solution of this issue promises to receive the maximum number of positive impressions. Because, for example, in summer the city is characterized by unhealthy air temperatures above +40 °C. And the number of tourists becomes simply incredible.

Equally, somewhat crowded Rome in May and September. The first month of autumn in the Italian capital, in terms of the number of hot and clear days, will generally give odds to some Mediterranean resort like Viareggio.

Also, very pleasant weather is standing in Rome in October: it is almost always warm here and moderately rainy. But there are still a lot of tourists – in the second half of the month, school holidays begin in most countries of Western Europe.

Roman November is not bad in terms of temperatures. But it can completely ruin a vacation – the showers are sometimes so strong that it’s scary to go outside the hotels or apartments.

But winter is the sweetest time here! 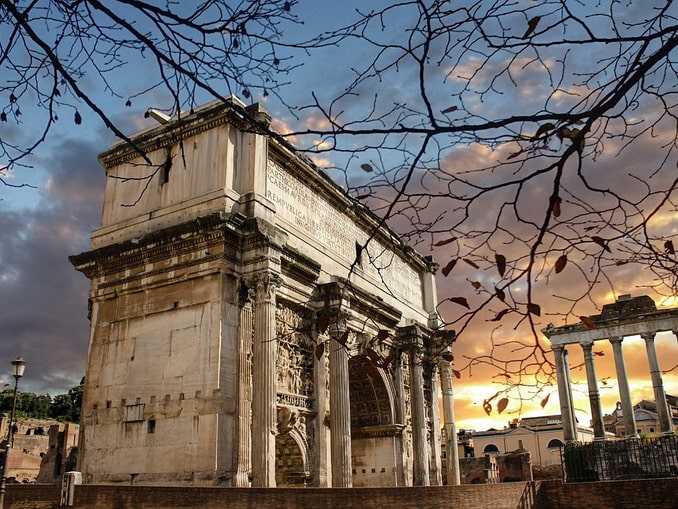 In December, Rome is dry and taut, yet doesn’t even know what frost is. We also recommend coming to this city in January – outside of holidays, of course. With caution, you should rest here in February – Italian schoolchildren are again given the opportunity to rest.

Seems to be a very smart move a trip to Rome in March. But in April, the traditional month of the Easter holidays, the “Eternal City” is again very crowded!

And most of those who come certainly try to get to St. Peter’s Square to hear the festive sermon of the Pope.

The Colosseum, an ancient gladiatorial arena that could not be destroyed for two millennia, is perhaps the emblem and symbol of the city. That is definitely the first thing you should see here.

The Colosseum is visited together with the Roman Forum and the Palatine Hill – at least that’s what it says on the entrance tickets. Entrance opens at 9 am at any time of the year.

You should buy tickets online and for a specific time to avoid queues (coopculture.it/en/products/ticket-colosseum-forum-and-palatine-_24h/) and then arrive at the Colosseum metro.

Free tickets, however, are not sold via the Internet. So if your group includes children under the age of 18, you will have to get tickets for them in the box office.

The ruins on the Palatine adjacent to the Roman Forum are open only from March to October (except Mondays). For example, Domus Augusti, that is, what remains of the palace of Emperor Augustus.

Only on Saturdays and Sundays are guided tours of Nero’s Golden House, Domus Aurea. You need to book your visit in advance.

You will almost certainly want to buy some souvenirs at the Forum. After all, you need to bring something from Italy as a keepsake of your visit?!

To consolidate your impressions on the first day of sightseeing Rome, we recommend walking to the majestic Trajan’s Column and Caesar’s Forum. For money, you will be provided with a headset, in the evenings they put on a show here that illustrates an almost fabulous concept called “Ancient Rome”.

The monument to Victor Emmanuel II, a huge white marble structure, openly hanging over the ancient ruins, can be climbed for free. To take a look at the neighborhoods adjacent to it and assess the size of the Forums. Inside are small museums: of the Risorgimento and the Flags of the navy (Museo Sacrario delle Bandiere).

On the reverse side, the Capitol Hill is pressed against the “Inkwell”. On the northern peak of it rises the church of Santa Maria in Araceli with a surprisingly beautiful interior. Aracheli, by the way, means “Altar of Heaven” – how not to go to the temple with such a name?!

In the church altar, which is considered the oldest in the world, there is a miraculous icon of the Mother of God, according to legend, painted by the Evangelist Luke himself. And in one of the chapels there is a small wooden figurine of the Infant Christ.

The original, carved from a tree that grew in the Garden of Gethsemane, alas, was stolen. Now a copy is displayed instead.

You can climb directly to the church by the stairs of Araceli, having overcome 124 steps. It was erected in 1384 in gratitude for the deliverance of Rome from the plague.

On the much less high stairs of the Cordonata, which was designed by Michelangelo himself, climb up to the Capitoline Square. And, if you have time, pay a visit to the museums – there are many interesting things on display inside. And, in particular, the famous bronze statue of a she-wolf, according to legend, brought up the founding fathers, Romulus and Remus.

By the way! From the steps of the Cordonata open up excellent views of the evening Rome. As if drenched in glaze by the setting sun…

A visit to the museums of the Papal City with the Apostolic Palace and the Sistine Chapel, St. Peter’s Cathedral and Square, and (if possible) Castel Sant’Angelo is a worthy answer to the question of what you can see in Rome on the second day of your stay. 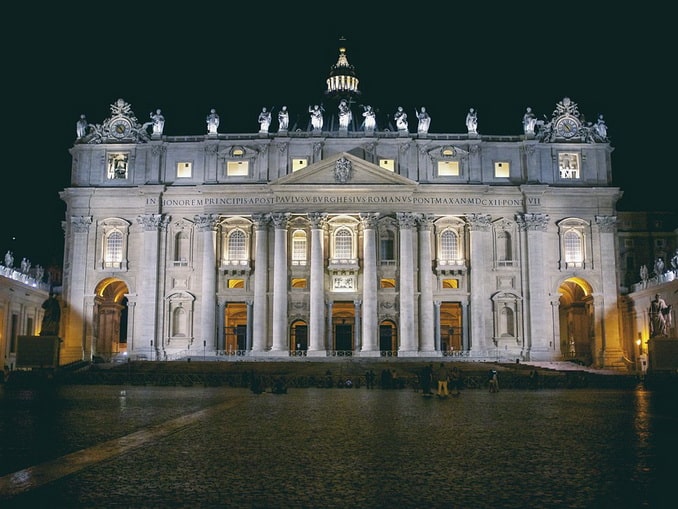 All listed above are located on the other side of the Tiber. And, as if on purpose, at a certain distance from all other attractions of “The Eternal City”.

A hike with an erudite guide, of course, promises a much better quality of impressions. But like all good things in life, such an excursion costs money – from 50-60 € per person.

The nearest metro station to the Vatican is Ottaviano.

Tickets to the Vatican Museums should be bought online and ahead of time – on a specific date. If you wake up in the season, say, a week before the intended visit, you may not find them avialable.

Surely in 2 days you will get tired of walking through the ruins and museums. And therefore we advise swpending some time on rest – walking around Rome can give even more emotions than visiting its main attractions. In addition, the first does not exclude the second!

On day 3, we suggest seeing the following places in Rome:

The mileage of the walking route does not exceed 3 km. If you take your time and stop at the places you like, it will be possible to keep within 3-4 hours.

On the way, you can stop by the Quirinal Palace. Built once for the Pope, and now used as the official residence of the President of Italy.

A visit to the Quirinal Palace is in many ways a unique experience. Requiring some preliminary preparation, participation should be booked at least 5 days in advance.

One of the two existing excursion routes is almost free. After all, for the reservation you need to pay only 1.5 €.

On the 4th day of the trip, it’s time to add some variety with a country walk, isn’t it? Or even several, why not? For over time, the desire to walk in Rome proper weakens somewhat, a change of scenery is required.

The simplest option is to visit the town of Tivoli, where the residence of Emperor Hadrian is partly preserved. Also, here you can visit the villa of the Dukes d’Este, the fountains of the terraced park inspired many sovereign persons to create imitations.

The mighty castle of Pope Pius II dating from the second half of the 15th century, the Gregorian villa of the pontiff Gregory XVI and the ancient temples of Vesta and Sibylla are other popular attractions of the town.

By car, you can get to Tivoli from Rome in 45-50 minutes. The commuter train will spend more than an hour on the road from the Tiburtina station. 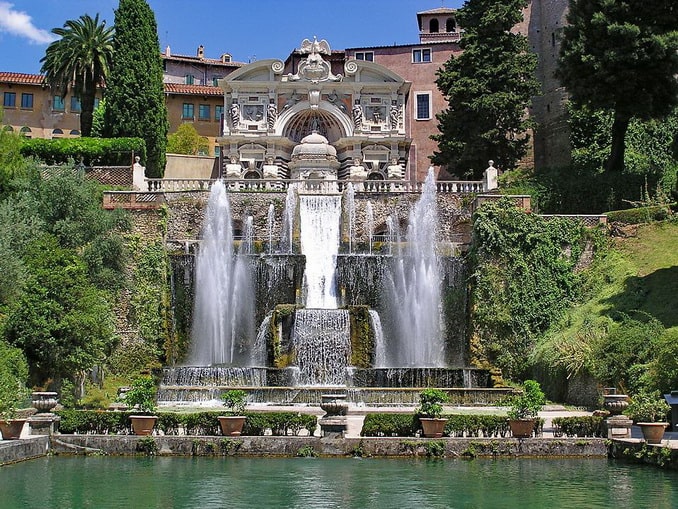 Recently, a trip to Castel Gandolfo also promises interesting impressions. For now tourists can see not only the ancient town itself and enjoy the views of Lake Albano, but also visit the summer residence of the Pope with magnificent Barberini gardens next to it.

You can easily get there on your own: by train from Termini or by bus from Anagnina station.

Every Saturday, a special train leaves directly from the Vatican to the estate for a one-day tour!

In summer, you may want to go to the sea. Since the town of Lido di Ostia is situated only 30 km (train) from the center of Rome. The less popular Anzio and Nettuna are easier to reach by car.

Or even go to Tuscany. Yes, why not – to see the sights of Florence you need to spend only 1.5 hours on the road.

Villa Borghese is best left for a snack. Moreover, the visit time must be booked in advance – no more than 360 people can be inside at a time.

On the other side of the Pincio hill, on which the Borghese gardens are located, there is one of the largest Roman squares, Piazza del Popolo. Not too ancient (beginning of the 19th century), but impressing with its scope.

We recommend visiting the twin churches in the square: Santo Maria dei Miracoli and Santo Maria in Montesanto. They date from the end of the 17th century, the heyday of the Roman Baroque.

Once in Rome on a long visit, it is unwise not to come to the extremely authentic area of ​​Trastevere. It is located on the western bank of the Tiber, and in many respects it has retained that cozy medieval flavor that is so dear to the traveler’s heart.

Wander through the old streets, look at the houses, order pasta in one of the local restaurants. This is what the Romans themselves do on weekends – why not follow the example of them?

By the way, in Trastevere that an excellent example of Renaissance architecture is located – Villa Farnesina. Inside you can see not only rich interiors, but also incomparable frescoes by Raphael. Tickets with an audio guide cost only 10 €.