What to see in Florence in 1-2 or 3-4 days on your own? Iconic sights, walking routes, ticket prices 2022. Where to stay, what to visit in the vicinity of Florence – in a review of good Time to Trip.

Florence has no shortage of iconic places – it is not for nothing that this city is calle the capital of the Renaissance. And regularly falls into the Top 3 most visited tourist destinations in Italy.

Therefore, it is especially important to decide on the route before the trip. And then strictly follow the planned schedule of visits to the sights of Florence.

For otherwise, the legs themselves will take you in an unknown direction. And by evening you will be surprised to find that you have been dreaming for a long time on the banks of the Arno.

Or in some church cloister – there are many of them. And each one is like a story about the “good old times”…

Do not expect to cope with the compilation of the route yourself? Then use the services of an erudite guide in Florence! Well, or carefully read our article!

However, if you think sensibly, it’s not so bad – to get lost in the Tuscan capital. After all, then it will turn out to see a lot of things that a disciplined tourist does not even suspect!

The most common format for visiting the “Flower of Tuscany” is a day-long visit. Then the traveler, oversaturated with impressions, boards the train. And leaves to see attractions in Venice or Rome, Milan.

There is no need to be surprised at this! After all, most people today just want to see. Not to understand or realize…

Well, we will act the old-fashioned way.

You will almost certainly have to move in the crowd – even in September, Florence is thoroughly crowded. And often get out on the roadway. Because there is a high risk of collision with other tourists on the sidewalk.

is beautiful in and of itself. But its main decoration is the mighty Palazzo Vecchio. 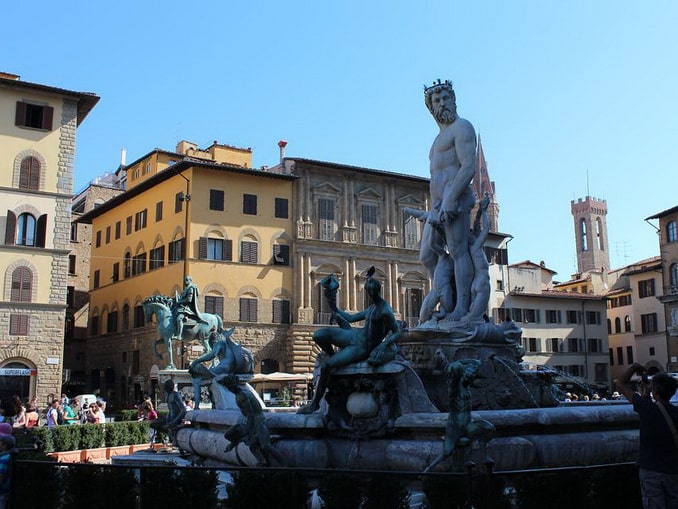 Once, of course, it was also new, and Bargello Castle was considered old. By the way, the last one also survived. And we also recommend seeing him … a little later.

Apart from the magnificent Duomo, Palazzo Vecchio is probably the main attractions of Florence. Both outside and inside.

But first look around the square. Type clean water from the tap, which is built right into the wall of the ancient citadel – you can drink it – we checked!

Take a quick look at the founder of the formidable Medici dynasty, Cosimo I on horseback, admire the white marble sculpture of David …

But don’t linger too long – it’s a copy. The original for greater safety today lives in the Florentine Gallery of the Academy (Arts).

The services of the modern city hall, living in the Palazzo Vecchio, do not prevent you from visiting the epicenter of Florentine power, the former residence of the formidable Medici.

Which, however, in the middle of the XVI century moved to the Palazzo Pitti. Standing across the river from the center of public life in Florence.

Probably Eleanor I of Toledo sang in the ears of her husband Cosimo that the Grand Dukes of Tuscany should not settle in some kind of fortress.

A guided tour of the halls of the Palazzo Vecchio will easily take half a tourist day. However, even walking on your own, you are unlikely to keep within less than 2 hours.

By the way, it is not necessary to stock up on an audio guide – the halls are equipped with signs with explanations in English.

An obligatory attraction is the ascent to Torre di Arnolfo, whose height is as much as 95 meters! The observation deck offers amazing views of the tiled roofs. And another famous landmark of Florence – Santa Maria del Fiore.

When you leave the Medici residence, don’t forget to admire the Loggia dei Lanzi with its magnificent sculpture. And then head to the most famous museum in Florence,

Guides rightly believe that a thoughtful examination of its collections will take no less than 2-3 hours! It is possible that you will have to spend some time in the queue for the entrance – there are enough people who want to!

Next, go to the Arno embankment, look for the Vasari Corridor with your eyes, try to find a good angle for photographing the Ponte Vecchio.

And… for 1 day is enough. It’s not at all a fact that you can do so much in just a few hours!

Note that the Ponte Vecchio is another charismatic attraction in Florence. Which is more correct to consider from a distance – tourists today subscribe to literally every square meter of ​​​​the famous crossing over the Arno… 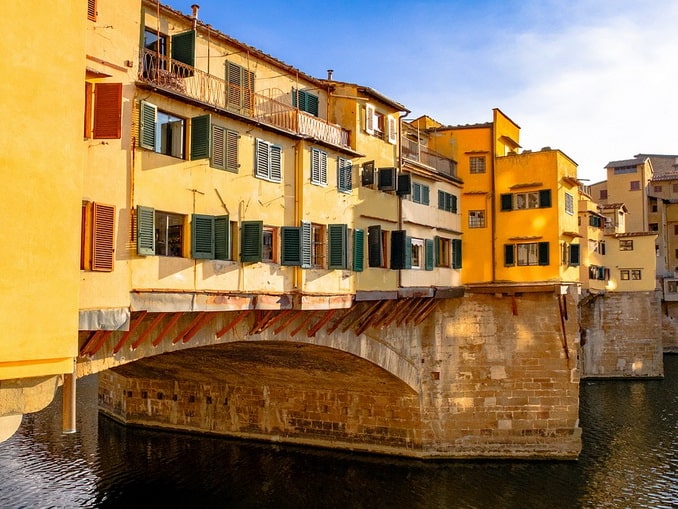 We recommend not to settle in the very heart of the city. At least because it’s more expensive. And you will not rest from the huge and noisy tourist crowds.

On the one hand, this will allow you to stay in the thick of things (you can walk from it to the cathedral in 5-7 minutes). On the other hand, do not focus only on Florence. And, for example, get out for a day to see Siena.

It makes sense to move to the other side of the Arno. And settle near the wonderful church of Santo Spirito.

We especially recommend the cheap hotel Santo Spirito Venti, a 5-minute walk from Ponte Vecchio. And about 15 – a quick step – from the station!

Spacious rooms can accommodate up to 4 people Breakfast should be included in the price!

The next day, it is worth beginning where you started and the first – on Piazza della Signoria. Further through the Uffizi, go out onto the banks of the Arno and almost along the path of the Medici head to the Ponte Vecchio bridge.

You can follow this route through the covered Vasari Corridor, which now houses an art gallery. But faster – just along the embankment and the bridge!

Get up early? You can watch the sunrise over Florence. No? Just cross the bridge and head towards Palazzo Pitti and the Boboli Gardens beyond.

By the way, the Gallery in Pitti is very fond of those who get up early. Because it opens at 9 am. And by 10-11 o’clock there is a decent queue at the entrance.

Please note that you will spend at least half a day inside – with or without a guide. Indeed, in the halls of the Pitti Gallery, as many as 11 paintings by the incomparable Raphael are exhibited.

The palazzo itself is considered a masterpiece of the Quattrocento style. This is outside – inside, almost everything in the 19th century was redone in a faceless, albeit magnificent style.

We especially recommend visiting the costume museum if it is open (complex ticket, the first Sunday of the month admission is free). Well, take a walk in the park.

For although the Boboli Gardens are small and not luxurious, they are perhaps the first example of a regular park in Europe. In May, whole beds of peonies bloom charmingly here.

After the art gallery, head to

It is not old – at the time of the great sculptor, goats were probably grazed here – but it is famous for its exceptional view of the city. The lion’s share of those panoramic photos that circulate on the Internet were taken from here!

We would recommend finishing on the second day at Piazza del Duomo. Whose large part is occupied by the grandiose, but too overwhelming Cathedral of Santa Maria del Fiore. Next to which stands the openwork, truly precious bell tower of Giotto. 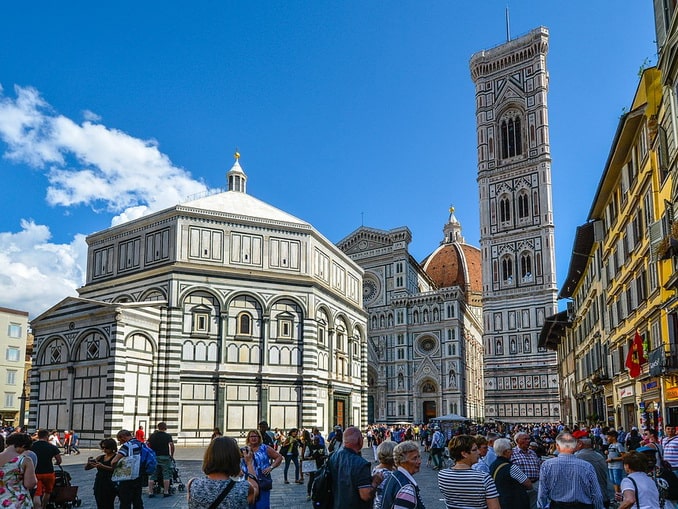 You won’t be bored! After all, even after 2 days of walking, Florence will find something to surprise you with.

Let’s mention again the Galleria dell’Accademia with the real “David” by the great Michelangelo. And let’s not forget the Basilica of Santa Croce, which stands aside from the center.

With frescoes by Giotto inside and the tombs of such titans as Michelangelo, Machiavelli, Rossini and Fermi, Dante.

We also recommend paying attention to:

Where to go in the vicinity

You may want to travel from Florence to see other interesting cities in Tuscany. After all, trains run here regularly, and the distances are simply ridiculous from the point of view of experienced travelers.

Of course, you can also reach Perugia, which has preserved a number of Etruscan monuments (about 150 km).

But first you should see Pisa with its cathedral and the famous leaning tower. The train journey from Florence takes only about 50 minutes.

We advise you to look into Lucca, the homeland of the sincere composer Giacomo Puccini. Or even get out to the sea – for example, in Viareggio.

Of course, you should not deprive Siena of your attention. For inspection of which, by the way, the day will not be enough.

A great option for a half-day trip is the town of San Gimignano. The settlement is under the protection of UNESCO. And you will understand why, you just have to go inside the ring of walls…

It is most convenient to come to Florence through the airports of Pisa or Verona, where direct flights fly from most major cities in Europe. Then take a train or bus: they run regularly, and you will have to spend about an hour on the road.

An individual transfer from the Pisa and Verona air hubs costs too much, from 150 € one way.

It is quite possible to get to Florence by car! After all, there are enough toll highways in Italy. The only bad thing is that they are too expensive.