Florence in December – is it worth visiting? Weather 2022, how to dress, prices for excursions, for how much you can rent an apartment? What to do in Florence in Christmas and earlier, where to go in Tuscany and beyond – found out goodTimeforTrip.

More recently, we have analyzed in detail and with taste the question of why you should go in Florence in November. Today we decided to dig deeper – what is going on in the capital of Tuscany and the surrounding territories in December?

Does it make sense to plan a trip to these – not so sunny and warm in winter – regions in the early winter? How festive and morally warming will the Christmas meeting turn out to be here?

How much will you have to spend if you are going to pay a visit to Florence in the beginning of December? And does it threaten you to leave with very blurred impressions, or even simply dissatisfied, if you intend to see “The Flower of Tuscany” at the end of the month? Or even on New Year’s Eve, that is, on the threshold of January?

We have studied the topic in detail! And tried to answer all the questions that may arise from a person planning a trip to the “Capital of the Renaissance”. At a time that is not the most usual from a tourist point of view. That’s what happened…

Weather in Florence in December

In the more northern cities of Europe, it would certainly be called autumn one. After all, throughout the month, the air temperature tries not to drop below + 10-12 °C. And sometimes, literally in a jump, attends to get to +15-17 °C.

For example, the beginning of December 2021 in Florence turned out to be quite cold. During the first decade of the month, even during the day, the air barely warmed up to +10 °C. And, of course, sightseeing tours of the streets were a little less popular than usual.

But in the second half of the month, Florentines and travelers observed much more familiar numbers around +11-14 °C on street thermometers. And at night, the weather stopped pretending to prepare to freeze the streets and people – the air temperature did not drop below +5 °C.

Usually Florence celebrated Christmas on such an optimistic note. And on New Year’s Eve, the atmosphere warmed up even to +15-16 °C for a couple of days! In compensation for this, however, the birthplace of the Renaissance was shrouded in fog.

The amount of precipitation is significant at the same time – according to statistics (70-80 mm), December is the second most rainy month in Florence. But they are distributed by days in a way that spares the feelings of tourists.

That is, inclement weather traditionally happens no more than 4-5 days per month. Otherwise, you can count on partly cloudy or even generally clear sky!

Not a bad gift for someone who is determined to see all the main sights of Florence? And also visit some interesting places in Tuscany! 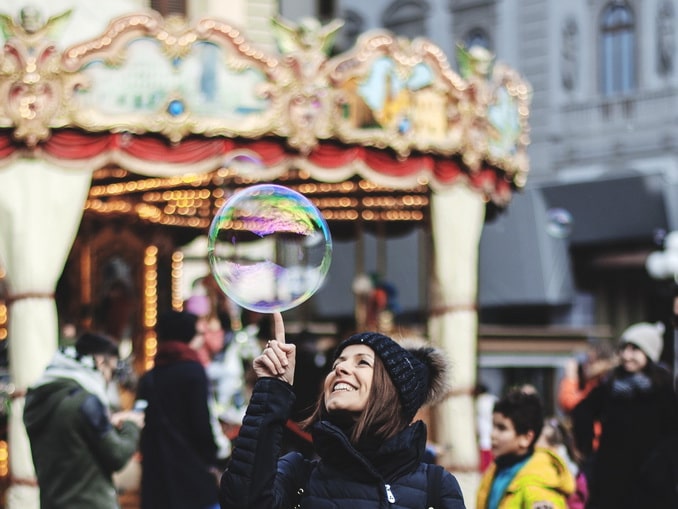 Those, who visit Venice in December, we recommend putting on almost winter clothing. But in the case of Florence, this approach looks redundant. Because in most occasions, a light demi-season jacket or even a windbreaker “reinforced” with a sweater will be enough.

The hood on the jacket and thick-soled boots have a good chance of being a valuable advantage. Although in general, sneakers or moccasins may well be enough – there is actually nowhere to climb the big hill here.

In case of a long (4 or more days) visit, you may need a raincoat and rubber shoes. Especially if you plan an extensive program of country events – the weather here at this time of year changes quickly!

They only warm up the desire to stay longer. Since for the amount of about 70-80 € per day you will be able to rent a beautiful apartment located not too far from all the attractions.

We advise you to pay attention to the Renovated Central Suites. Although it is standing on the opposite bank of the Arno from the Duomo and Piazza della Signoria, it has a whole bouquet of positive properties. For which this flat is reasonably praised in the reviews.

In the same area of San Frediano, you will also find much more spacious Luxury central flat river view. Having settled in which, you will feel almost like a Florentine.

We also recommend a pretty spacious Macci apartment near the church Santa Croce. Most tourists staying there, are crazy about its location, as well as the degree of equipment. Against the background of a modest price tag, it looks truly fantastic.

Prices for excursions around Florence in winter are at the lowest level of the year – we do not mean Christmas Eve and the holiday itself.

In particular, for a fee of less than 30 €, you can arrange a tour of the Uffizi with a guide. And after paying about 50 €, you will go on a day trip to Tuscany. With visits to San Gimignano, Siena and Pisa.

As follows from the above information, you will almost certainly get the opportunity to plan and implement a very busy sightseeing route. Both in Florence itself and in the whole of . As well as other cities in Italy – it is simply unwise to miss the chance to get to Rome in December!

Travelers arriving at the Tuscany capital for the first time immediately seek to visit the local Duomo, Santa Maria del Fiore. Fortunately, it is located near the main station of the city, Santa Maria Novella, and does not charge a pay for admission. But to climb to the observation deck on the dome, you will have to sign up in advance on the appropriate page. And, of course, to pay.

We also recommend – if you will be in Florence not on December 24 or 25 – but a little earlier, visit the Palazzo Vecchio. And climb its tower, which offers impressive panoramic views of the city and even the surrounding area.

There are long queues at the nearby Uffizi Gallery even at this time. Therefore, perhaps buying a ticket online, allowing you to go inside without waiting, is the most reasonable choice.

Alternatively, try visiting the Palatine Gallery of the Pitti Palace. Almost certainly you’ll get no less pleasure, and will skip the line at all.

As usual, a sense of peace and quiet joy will feel everyone by visiting local churches on the eve of Christmas. You can go to a famous one – like the Basilica of San Lorenzo. But many travelers arriving by train do not neglect Santa Maria Novella. It has the oldest Renaissance facade in Italy and is decorated inside with works by Botticelli and Ghirlandaio.

Excellent views in both directions open from the arch on the Ponte Vecchio bridge. And even better – from Michelangelo Square! Which seems to be floating in the air above the old center.

Bargello Castle is sure to be visited by fans of medieval architecture and art. And the Basilica Santa Croce – those who would like to see Giotto’s frescoes. And to worship the graves of such titans as Michelangelo, Galileo and Rossini.

With almost 100% probability, a tourist who has arrived in Tuscany will see Pisa. Regardless of whether he arrives in May or September!

For Pisa is famous not only for its Leaning Tower, on which Galileo conducted his physical experiments, but also for its beautiful cathedral. The well-known architectural gem of the ancient city is the amazingly elegant church of Santa Maria della Spina.

Many travelers simply don’t get to Lucca. There is no corny time – you still need to visit Siena, which is 70 kilometers from Florence

We will also mention such a remarkable town as UNESCO-protected San Gimignano. Incredibly beautiful is Volterra, to this day not caressed by the attention of tourists – especially in winter.

It begs to be one of the stops during your journey through the region the pretty wine-growing Montalcino. While walking through its old town, you will certainly be visited by a sense of harmony.