What is the best time to visit Cappadocia? To fly in a hot air balloon, explore valleys, see famous underground cities? Weather in Cappadocia, the number of tourists by month, prices for hotels and excursions in spring and summer, autumn and winter 2022 – in the detailed material of goodTimeforTrip.

Cappadocia, an amazingly beautiful region of Turkey, whose fame has turned into real glory in recent years, is rapidly turning into a year-round tourist destination. Which, on the one hand, is due to the ever-increasing number of curious people. And on the other – with the epiphany of a certain part of them.

After all, even a superficial study of the question when is the best time you can visit Cappadocia gives an unexpected result. Because you are surprised to find – always! Not only in mature spring, summer and velvety autumn, but also in less promising months.

Yes, in November it is often cloudy and rainy in Cappadocia. And in the winter months it often snows there. We’re not talking about frosts anymore…

But the balls still rise up and fly. And the fog-shrouded or snowy landscapes floating far below seem literally fabulous.

You will notice that as soon as the wind rises, and the fun is over – montgolfiers remain on the ground. And we will answer that you may encounter such a nuisance in the ultra-high season.

Besides, wouldn’t you like to fly over Cappadocia in a small company? Instead of being an insignificant part of a huge armada? And instead of enjoying, squint with disbelief at the overflowing baskets floating nearby?

Is it cold here sometimes? This is not a particularly large fee for pleasantly low prices. And also a unique opportunity to wander among the “fairy chimneys” and climb into prehistoric cave churches in almost complete solitude.

In addition, the local December isn’t so freezing. On the contrary, in many cases it is quite soft and does not strain. In any case, purely statistically, usually it’s no colder than, say, the Northern Germany or Great Britain.

However, closer to the facts!

Its beginning is a good time to start exploring the “Land of Beautiful Horses”! Indeed, in March, Cappadocia almost forgets that it is a popular tourist destination.

And the few who came to take a look at the outlandish rocky landscapes and caves of the region rejoice in their foresight. Because they visit the iconic sights of Cappadocia almost alone. 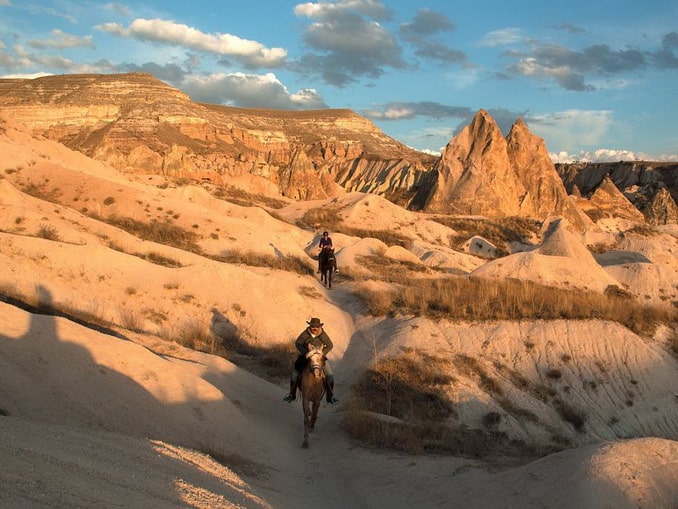 The weather conditions are very good for traveler who likes walking. After all, the air temperature during the day sometimes rises to + 15 °C and above.

At night, however, it is much more modest here – 0-+6 °C is a common thing. But who in their right mind would walk the Cappadocian valleys at night?

The probability of cloudy and even rainy days is quite high. After all, March, along with May, is statistically the most rainy month here. Which is compensated by a small number of tourists.

Is the wind noticeably getting stronger, even in comparison with February? Yes, perhaps there is some risk that your flight will be canceled or postponed. But, as we said above, this happens even in the summer.

Speaking of prices! During the first half of spring, they stay at levels allowing to save a lot. Both at the hotels in Goreme and Nevsehir, and even on hot air ballooning – a place in the basket will cost 80 € against the standard from 100-120 €.

In general, we think that early spring is one of the best time of year to travel to Cappadocia. If time permits – after visiting Istanbul.

A little later the picture changes – there will be more warm and even hot days. And nature will bloom violently, painting the edge in much brighter and juicier tones. Closer to Easter tourists begin to arrive in slender columns. And the prices for everything are growing fast!

The air temperatures in April Cappadocia are not particularly stable – even during the day, anything can happen and the range is from 0 to +22 °C. But clear days are in a noticeable majority, as the nature is actively preparing for the high season.

Which comes in the region no later than the May holidays. When the air at daytime peaks warms up to +20-24 °C. And travelers, attracted even occasionally by inclement, but warm weather, are becoming more and more.

Since the beginning of May, Cappadocia has been experiencing a noticeable influx of tourists. And hotel price lists react accordingly.

Inexpensive, but comfortable hotels at this time are booked almost to the eyeballs. However, if you staked out a room in the winter, then everything is fine!

If in June thermometers in Göreme and the surrounding area live in the range of +24-28 °C, and precipitation sometimes falls, then in July and August it is proposed to actually forget about the existence of the latter. Clear, almost cloudless days come in succession, the atmosphere warms up to unbearable values by noon.

There are too many people – after all, you can get from Antalya to Cappadocia in just 7 hours. This is if by car – organized bus groups often stop at different production facilities along the way and therefore spend 10 hours on the road.

Independent travelers mostly avoid the region in summer. Firstly, it is too hot to walk through the valleys for several days. Secondly, it is too crowded, and therefore expensive!

Fifty euros for a room for two – in June it’s almost for nothing. Moreover, the hotel is located just 500 meters from the center of Goreme. And the breakfasts served here are often enough for the day long.

Another literally golden time – both in terms of the weather and not the largest number of visitors. Moreover, if in September the weather in Cappadocia attracts masses of tourists, and you will reluctantly overpay for flights or an excursions, then starting in October there will be not so many visitors. 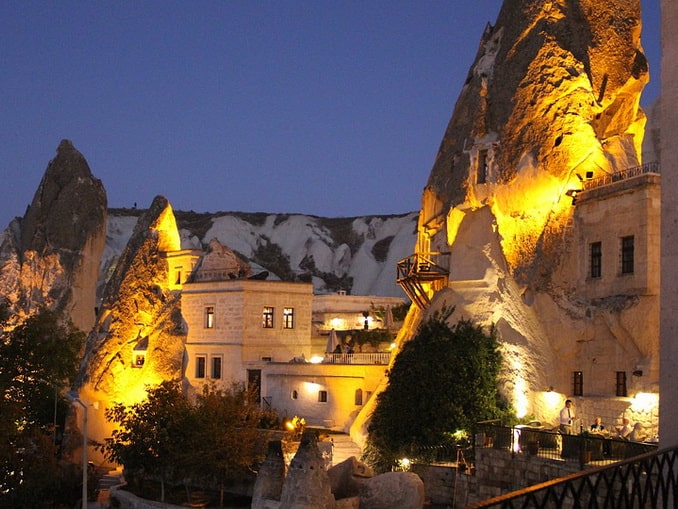 Few people know, but the middle of autumn in these parts is a warm, very pleasant period. Unhurried, somehow peaceful, freed from the constant bustle and huge crowds.

Reviews of people who have been to October Cappadocia call the month the best time to visit. And invariably radiate satisfaction from life.

There is a huge reason – after all, you get from the realm of slushy, or even frankly cold weather to a bright, sun-warmed and therefore very optimistic place.

During the day it usually happens up to +18-24 °C, at night about +10-15 °C. Winds are weak, precipitation it seems has not yet returned from the summer holidays. The sky invariably turns blue, nature is just beginning to change into bright autumn outfits.

The local November is somewhat worse. First of all, in terms of temperatures.

After all, +8-14 °C is generally not enough to walk around in a light jacket. But precipitation has little in common with the usual autumn showers for the UK. That is, nothing at all – at this time it rains here only 2-4 days per month.

We wrote in detail that even in December Cappadocia is by no means closed. And if travelers are not particularly numerous, it is mainly because they are poorly familiar with local specifics and are guided by stereotypes.

Yes, it’s usually cold here, as it should be in winter in a mountainous area. Snow falls regularly and even has the audacity not to melt for several days or even weeks.

It gets cooler in January and later. The wind is also getting stronger, which is why many people try not to come to Cappadocia in February and generally in the winter.

But temperatures in general are not so low that you don’t want to wander in the fresh air. And the frosts are not so severe that you have to wrap yourself in a sheepskin coat. 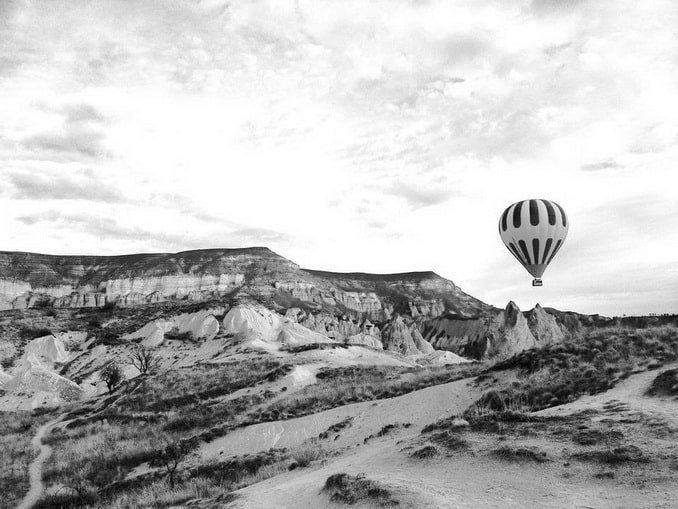 The usual temperature is not less than – 5-7 °C – and then it happens only at night. Drops to -15-18 °C are extremely rare, and do not happen every year. There are also periods during which the weather is almost autumnal (+6-8 °C).

Precipitation is not too rare and sometimes quite abundant. But the sun regularly appears in the sky. And the air is so transparent that the terrain is viewed for kilometers.

As for the prices, they have every chance to please you. In addition, they can provoke a real journey – the distance from Istanbul to Cappadocia allows to see both the sights of the ancient city and the unique natural landscapes in just a week. It will be a memorable trip for the New Year holidays, don’t you think?!