What to see in Istanbul in 1 day, 2 or 3, much more? Top sights of the largest city in Turkey, how to build a route, prices in hotels 2022. How much do excursions, entrance tickets cost? Where it is better to stay, what to visit in the vicinity of Istanbul – in the good Time to Trip review.

Istanbul is perhaps the most intriguing city in the Old World. A fusion of East and West, a mixture of cultures and traditions.

It’s easy to lose your head here. And even touch with reality!

As well as being confused, literally getting lost in the labyrinths of the streets of the former great Constantinople.

That is why most travelers do not risk exploring the city on their own. Buying a package tour and entrusting the development of excursion routes to experienced individuals or travel agencies.

Considering this approach to be too straightforward and frankly boring, we have compiled a list of fascinating sights in Istanbul that a tourist manages to see in 3-4 days. Well, or a little more … If you like to be here and don’t want to leave!

Hagia Sophia was a symbol of the Byzantine Empire. And even today it remains the main attraction of Istanbul. Once the center of the universe of the great empire, its capabilities in its heyday, it still amazes with its scale.

After the capture of Constantinople by the Ottomans, cathedral was turned into a mosque. No one dared to destroy it: even the warriors of the 15th century were clearly imbued with the grandeur and power of the building.

Naturally, not to see the cathedral when you are in Istanbul is comletely wrong!

By the way, for decades Hagia Sophia was a museum. That allowed when visiting not to think about observing religious traditions. But you had to pay to get in.

But in 2020, the ancient cathedral was turned into a functioning mosque. Causing in the Western world a small wave of quickly, however, damped indignation.

One way or another, but the change in status did not benefit Hagia Sophia – as the citizens who managed to visit her say in the reviews!

However, this mosque is still worth a visit! Even if you arrive in Istanbul in the middle of November. 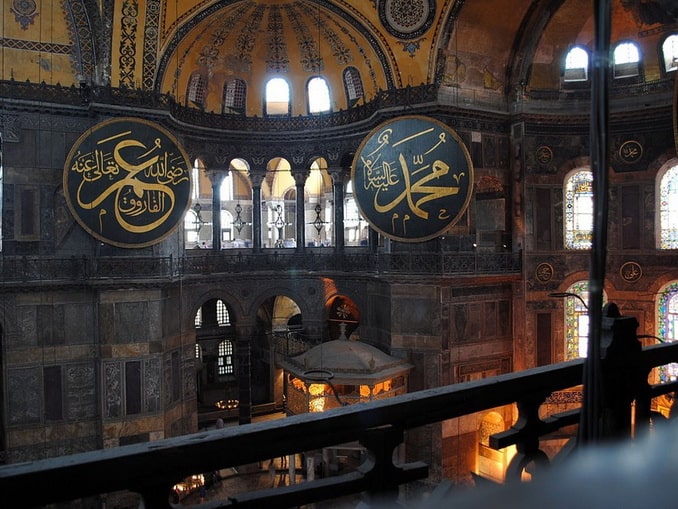 One way or another, we’re leaving. And we are moving towards another legendary building of the Blue Mosque, also known as

Along the way, an intelligent guide will not fail to tell you the history of the place. And he will be absolutely right – in other times a giant hippodrome lived here, where chariot races were held, and then gladiator fights.

The construction accommodated up to 100 thousand spectators and outshone the size of the Roman Colosseum. But, alas, it did not survive!

The religious building was erected in the 17th century. It is distinguished by a very unusual detail: 6 minarets.

According to legend, this happened due to a misunderstanding between the Sultan and the architect. The latter, however, was not punished: more – no less!

You could buy the Museum Pass Istanbul. Price – 360 TL, valid for 5 days, allows you to visit 12 Istanbul museums for free and without queues  – muze.gov.tr/urun-detay. To a number of other museums you can buy a ticket at a discount!

With a tour of the Basilica Cistern, a huge 16th-century reservoir, we recommend completing your first walking day in Istanbul. For tickets to the Cistern, a foreigner will have to pay 30 turkish lira.

We especially recommend visiting the basilica in summer, when the streets are unbearably hot. And in September, the weather in Istanbul often urgently requires cooling down!

Then you may well go to drink coffee with baklava – this is if you are an esthete and like to pose. Tourists with more simple and democratic views are shown to try the delicious local doner.

We also recommend tasting balyk ekmek – literally “bread with fish”. Well, that is, translated into English, a mackerel sandwich.

Here they are cooked – you will lick your fingers. To other sellers on street stalls there are queues of tourists!

Having prepared in this way, we go on a short cruise – on a full stomach, enjoying the views of the Bosphorus is much more pleasant. Yes, and more practical – less unhealthy, but tasty simit bagels you stuff into yourself. And more – crumble seagulls.

If there is time before the start of the boat trip, you can look at the Egyptian Bazaar, which is not far from the Eminonu pier. Only don’t buy souvenirs and gifts there – we will join the mass of reviews on this matter.

For if the local Turkish delight looks extremely attractive, this place is touristic. And that’s why prices are skyrocketing. But the local color rolls over!

Organizing an independent trip makes you think again. But such labor costs have every chance to pay off!

In general, it is better to plan a trip not on holidays – it will be cheaper this way. For example, it is better to fly out of the capital on April 30, and not on May 1: round-trip tickets will cost less.

You can book a hotel room at a reasonable price. In 2022, Booking offers some interesting places just from 30 euros per night. Not the very center, of course, but you can stay also in the Fatih district of Istanbul!

Consider, for example, the Sultanahmet Inn Hotel in the central area. The Blue Mosque is 400 meters away and the rooftop terrace provides excellent views. Topkapi is a little far away, but it didn’t matter – the hotels price is not too high.

An old house, which may have seen sultans, sheltered a cozy HHK Hotel. Whose staff is not just polite – helpful! And the cleanliness of the rooms is noted in every review.

A nice bonus of the establishment: views of the city rooftops and the famous Golden Horn Bay.

The Hotel Saba is also quite good. Located close to top attractions. And even the stops of the popular T1 tram route, which cannot be left untested. Why, and travel by local public transport costs mere trifles – according to Istanbulkart, it’s only 3.5 lira!

For european money, this is just anout 20 eurocents! Paris and Romeg, as well as many other big cities, will “rest” …

Tourists will have to think about excursions themselves, they will definitely not have a shortage of offers.

On the second day of your stay in Istanbul, you need to see the only, but colossal attraction: the residences of the sultans, Topkapi. The attraction is located in a pleasant proximity to Hagia Sophia, and therefore it is difficult to get lost.

It is more pleasant to visit with a English-speaking guide, well-versed in the history and customs of the Ottoman Empire. Without it, the purpose of too many buildings and premises will only have to be guessed at.

The services of an individual (only for you) guide are expensive – from 140-150 €. But, judging by the reviews, it’s worth it, sorry for the taftology. Moreover, you will be offered to visit “two in one”.

Entrance tickets will cost 200 TL. For the opportunity to visit the harem, you will have to pay another 100. With the Museum Pass Istanbul, they will be allowed everywhere for free.

We recommend spending it on visiting something that has not yet been seen. For example, the palaces of Dolmabahce and Beylerbeyi.

The latter, the summer residence of the sultans on the Asian coast, is furnished in a completely European way. And it is one of the bright highlights of the fashionable urban district of Uskudar. Studying it should be combined with a visit to the much poorer, but also the old authentic quarter of Kadikoy.

Even more luxurious, but far more popular among the tourist brethren, is the Sultan’s Dolmabahce Palace on the European coast. It is located in the Besiktas quarter, one of the most fashionable and expensive in the city.

Dolmabahce was built as the residence of the rulers of the Ottoman Empire in the 19th century – when Topkapi began to seem like a frank echo of the ancient Middle Ages. For tickets in 2022 they ask for 120 lira … 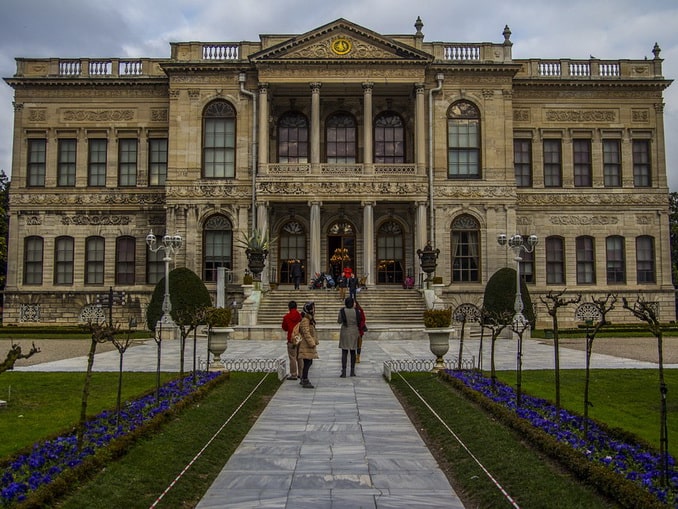 We will also mention not the most noticeable, but definitely worth visiting, sights. Like the monastery of Hora in the depths of the Fatih region, where marvelous frescoes of the Byzantine period are surprisingly well preserved.

And the old Catholic Church of St. Anthony of Padua in Beyoglu. An oasis of calm and tranquility on the edge of a turbulent stream called Istiklal Street…

An almost obligatory item in the program of events was a visit to the air neo-baroque Ortakoy mosque in the Besiktas region. It looks like a clean palace, albeit a small one, from the middle of the 19th century.

Getting there is a little inconvenient: first by tram T1 to Kabatash, then by buses No. 22, 25E. But the views that open onto the strait and the Bosphorus Bridge are worth it.

You can just go out of Istanbul – for example, to the green Belgrade forest. And you can make a whole trip – in the same Edirne. However, a distance of 235 km will scare away many, because such a trip will take a whole day!

A ship trip to the Princes’ Islands looks like a completely logical and even consistent step. Extremely popular, especially in the summer season.

Citizens who miss the thermal resorts will be reminded of the mountain resort with Yalova baths. For a not very large amount, they will take you there and back, tell you everything, feed you lunch. And, of course, they will let you improve your health in thermal baths.

Almost certainly there will be something “delicious” in the city itself. The same Galata Tower, the tallest building in the city during the Byzantine Empire.

Once it was part of the defensive fortifications of Constantinople, today it is used for observational purposes. The observation platform is extremely popular – a height of 52 meters allows you to see a lot!

There will be time – go to the Suleymaniye Mosque, the largest in Istanbul. Built it with am the great Sinan, nearby are the tombs of Sultan Suleiman the Magnificent and his famous wife Roksolana.

Art connoisseurs are unlikely to pass by the Museum of Mosaics, where large-scale mosaic panels of the Grand Palace of Constantinople discovered in the 20th century are exhibited. Now non-existent… The entrance fee is 35 lira, the museum is literally next to the Blue Mosque.