Cappadocia in February: is it worth going and how to prepare for? Weather, how to dress, what to bring back, prices 2023 in hotels and on excursions. What to do in Cappadocia at the end of winter, is it worth renting a car – in a detailed review of goodTimeforTrip.

Cappadocia is without a doubt a seasonal destination. Leaving the best, that is, the most pleasant impressions during spring flowering. Or at a time when nature is dressed in juicy green, gold or orange outfits.

For at this time, the traveler rarely has to think about what kind of weather forecasters predict. One way or another, it will be suitable for both hiking through the valleys and sightseeing flights in a hot air balloon.

And literally the only warm clothes that you have to take with you will be a pullover or jacket. For it is known that in the mornings and evenings it can be cool in the highlands.

But in the late December Cappadocia completely changes. And it’s not even about the snow, sometimes with a fairly thick layer covering the ground and roofs – you never know what temperature to expect the next day.

Will it be negative? You will be glad that you arrived in a down jacket and boots with fur? Sometimes on the contrary it’ll allow you to relax a little, giving a small plus and a clear sky. So there will be no need in tick warm clothing.

Again, in February, Cappadocia can be unkind to foreigners on foreigners, all the while delaying their attempts to fly in hot air balloons. And it can easily make frivolously dressed citizens regret their arrival – the cold here is quite real.

After all, travelers often get to the region straight from Antalya or Alanya, where in January thermometers show +20 °C without voltage. And the sun at this time warms there, not just illuminates the earth.

Naturally, such tourists are often unaware that they may need truly winter clothing. After all, it is usually not included in the list of things that need to be taken to Turkey.

Weather in Cappadocia in February

It can hardly be called harsh – the inhabitants of Canadian Edmonton will surely laugh at such a definition. But the local climate at the end of winter does not differ in excessively affectionate character.

In most cases in February, the air temperature in Cappadocia usually ranges from -2-4 °C to +6-8 °C.
Sometimes, however, it allows itself to deviate from traditions: both in one direction and in the other.

For example, at the end of February 2022, the air in Cappadocia warmed up to +10-12 °C. But at night at the beginning of the month frosts down to -15 were recorded.

Minus temperatures in the region at the end of winter, and even after sunset, are a common thing. So in the morning it is better not to leave the hospitably heated hotel room. If you dare, however, you can get a reward – an incredibly starry sky above your head.

Precipitation at this time of the year is quite negligible. But since the fallen snow does not melt as actively as you would like, you will surely be able to capture in your memory (and on your smartphone camera, of course) absolutely fantastic snow-white landscapes.

By the way, clear days in Cappadocia in February are not so rare!

Although the reviews often mention dense overcast, as well as completely bare valleys in the sense of vegetation. Which can hardly surprise a European or a North American accustomed to such weather.

All of the above leads to a logical, but also a bit ruinous decision – you still have to rent a car. For walking at this time of the year is useful to combine with trips by personal transport. Because while waiting for the same dolmush, you can get very cold.

By the way! If you intend to book a sightseeing tour of the region, choose the Green Tour first. After all, this route includes the most distant from Göreme sights of Cappadocia.

Those that are not so easy to get to without a car. For example: Derinkuyu underground city, Selime monastery, cave churches in the Ihlara valley.

This is the main troublemaker for tourists in Cappadocia in winter and even March. And not so much because its impulses are sometimes sharp and threaten to freeze an insufficiently warmly dressed person.

The thing is different – in windy weather, balloon flights over Cappadocia are canceled. For security reasons, of course.

But statistically, in terms of winds strength, the local February is a fairly calm month. And in general, it clearly loses not only to March, but even to April and May. Which are considered the best months to visit Cappadocia.

The cost of hotel rooms will please budget travelers. And how could it be otherwise – in February, after all, Turkey is experiencing the lowest of the seasons?! So Cappadocia sees quite rare tourists.

In general, you can choose captiously – literally everywhere there will be free rooms. We, of course, recommend paying attention to those hotels that represent a reasonable compromise in terms of value for money.

First of all, it is worth taking a look at the Grand Elite Cave Suites, which, based on almost two thousand guest reviews, has earned a rating of 9.2.

Literally excellent and Aydinli Cave Hotel. Where for 90 € per day a couple of travelers will receive a room, breakfast and exceptionally friendly attitude of the staff. To the center of Göreme from here, by the way, no more than 300 meters!

Less than 70 € per night is a room at the Stone House Cave Hotel. Also perfectly located and having no problems with heating – this is paid special attention to in the reviews.

The daily fee for renting a car at Kayseri Airport through the winter will be from 17-20 €. For a place in the balloon basket (plus transfer, light breakfast and champagne) you need to pay from 200 €.

Here everyone should choose independently. But in general, at least in early February in Cappadocia, it is worth making travel routes in accordance with the latest weather forecast. That is, to show flexibility, and in case of negative forecasts of synoptic, choose something closer.

Like an unpromising trip to the Open Air Museum in Göreme anyway. Or exploring the Pigeon Valley, along which even in February you can easily walk to Uchisar with its castle (about 4 km). 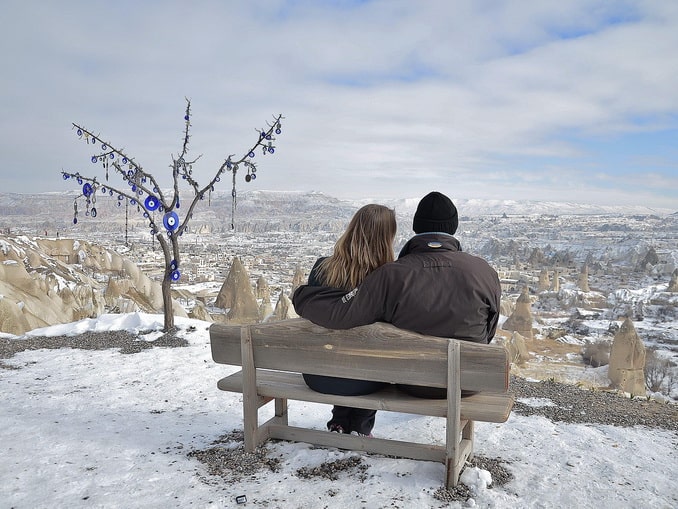 Relatively close to Göreme, the Valleys of Love, Pink and Red are stationed. But to Pashabag with its “fairy chimneys” and the Zelve Valley, whatever one may say, you will have to get by transport. Since 8 km on foot along the highway is too much for the cold season.

The Imagination Valley, Devrent, located in the neighborhood, should definitely be included in the same itinerary. After all, it is famous not only for “Camel”, but also for other stone figures that cause a surge of fantasy among tourist.

We have already mentioned the famous Derinkuyu – this cave city is located 35 km from Göreme. But the narrow Ihlara Canyon (80 km by highway) is not easy to get to. Although I really want to – because of the abundance of cave churches of the early Byzantine period, it is considered perhaps the most interesting sight of Cappadocia.

The winter in Ihlara is probably dangerous. You may not meet wolves there – these predators have learned to be extremely careful in places where people live. But semi-wild huge dogs from nearby villages often run here in packs.

Ski lovers should hardly miss the chance to visit such a place in winter. And the point, of course, is not in an extinct volcano, which effectively adorns the panoramic photos of Cappadocia.

And in the Ski Resort of the same name near it. Well developed, that is, having all the necessary infrastructure! Including the rental of appropriate equipment, 18 slopes of different difficulty levels, 13 lifts.

From Göreme to Erciyes – less than 90 km along the highway, from Kayseri about 25 at all. This allows you not to overpay for a hotel right near the slopes, but to stay in the administrative center.

And from there go skiing or snowboarding. Why not – in February the ski season is in full swing here!