Cappadocia in January – is it worth celebrating the New Year? Weather, how to dress, prices 2023 in hotels and on excursions? Do balloons fly in January Cappadocia, what you can do – in the review of good Time for Trip.

At first glance, it seems difficult to dispute the statement that Cappadocia is not suitable for a tourist trip in winter. After all, it is clearly not in the south of Turkey, there is no sea here, and the climate is continental… So, it is quite harsh?!

But we’ll still try! Since a detailed study of the issue suggests that in addition to the explainable disadvantages, there are also significant advantages.

Particularly in January, Cappadocia is perhaps even more beautiful than in summer – a thin snow cover gives the region some kind of airiness and magic. The weather, however, is not nearly as cold as the geographic coordinates might suggest.

As for prices and the number of tourists, they are at an annual minimum. No, on New Year’s Eve, Cappadocia experiences a small influx of foreigners and even Turks themselves from other regions. But it quickly fades away!

At the same time, in January balloons fly over Cappadocia as well. Perhaps not as regularly as in the high season – winter winds make their adjustments – but their colorful domes regularly hover over the valleys.

In a word, if you are an active traveler and crave new unusual sensations, then a trip to January Göreme is simply shown to you. Reception, preferably not for a couple of days – there is something to occupy yourself with for a week!

And we guarantee that from Turkey you will bring not only ceramics and anise tincture, but also brilliant impressions!

What do you need to know and what to prepare for? Let’s tell now!

Weather in Cappadocia in January

A little worse for long trips around the region than in December. After all, the first month of the year here is characterized by somewhat more severe weather conditions.

Unlike Cappadocia in early December, in January you don’t want to call the weather autumnal. Since at night it often and willingly freezes, but during the day the air temperature tends to fall below zero.

In particular, in January 2022 in Cappadocia, by the end of the month, negative temperatures were established around the clock. And if in the daytime the thermometer rarely showed less than -5 °C, then at night frosts were recorded up to -15-17 °C.

However, there were also days when the sun heated the atmosphere up to optimistic +6-12 degrees Celsius. For example, the first decade of January in Cappadocia often bears little resemblance to winter.

Perhaps that is why the period from 6 to 10 January is so popular among tourists?!

Precipitation in comparison with autumn becomes slightly more, but the total number of rainy days is not too large. In any case, in Antalya in January it will rain much more heavily and often.

At the beginning of the month, if snow falls, it melts rather quickly. But closer to February, the white cover is no longer in a hurry to disappear the next day after the snowfall.

The number of clear days is quite large. The average statistical norm is at least 10-12 per month! 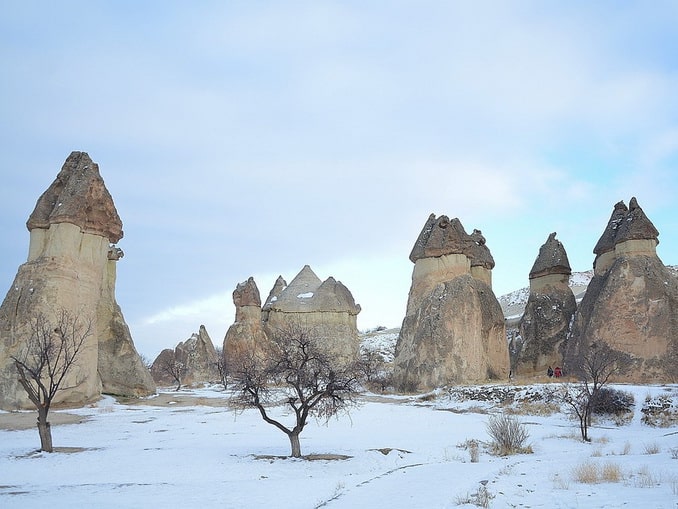 In general, we recommend that you pay attention to the weather forecast for the next 1-3 days in case of a trip. And dress for walks and, especially, balloon flights, with some margin.

That is, you have every right to hope for a slight coolness and sun. But morally, one should prepare for heavy snowfall with wind, and a quick cold snap.

And remember that after sunset it is better not to walk around the region. That is, do not get out of the settlements at all, except by car and in the company.

Since packs of wolves also come to some valleys of Cappadocia in winter. Yes, and dogs from remote villages are often not particularly friendly towards visitors.

Even during the day, hiking in the region should be reduced in time compared to summer and even Cappadocia in late March. And prepare for them, as for full-fledged autonomous campaigns in isolation from civilization.

Since there are really few tourists at this time of the year. And help, in which case, may not come soon!

It is obvious that on New Year’s Eve Cappadocia again briefly becomes extremely in demand. So the cost of rooms in Göreme hotels reaches local peak.

And those who did not book an inexpensive place for themselves in October or early November are forced to overpay. Or stay in Nevsehir or Avanos.

If your trip is scheduled for dates after January 7-8, then there should be no problems with the availability of rooms.

What hotels do we recommend to pay attention to? First of all, to the inexpensive, that is, almost budget, but excellent Peace Stone House. Not a cave building – it’s a separate building – but charging a very small fee (about 40 € per night) for being in very spacious rooms.

Close to the center, but mostly very quiet. And from the rooftop terrace, you can watch the balloons from dawn to dusk – the panoramic views are so good here.

It has a wonderful location in the center of Göreme and provides guests with the right to free parking (this is convenient if you came to Cappadocia by car from Istanbul, for example) Relic House. “The balls fly right over your head” – it is noticed in one of the reviews, in most of the rest they sing the praises of the quickness and politeness of the staff.

If you like swimming and bathing, then by all means pay attention to the inexpensive Heybe Hotel & Spa. Where both a heated pool and a hammam will be at your disposal. All this for about 40 € (promotion) or a little more per day!

having spent everything 40 € per person you can take part in the Red Tour. Or explore the remote cave churches in the Ihlara Valley if you decide to book the Green Tour.

For a hot air balloon flight in a fairly large company, you have to pay around 200 €. Individual events of this kind are more expensive – from 250-300 €.

Although the weather in Cappadocia in January will not be conducive to long walks every day, we recommend that you do not stay too long in the hotel. And plan an extensive excursion program in advance – there are many interesting places! 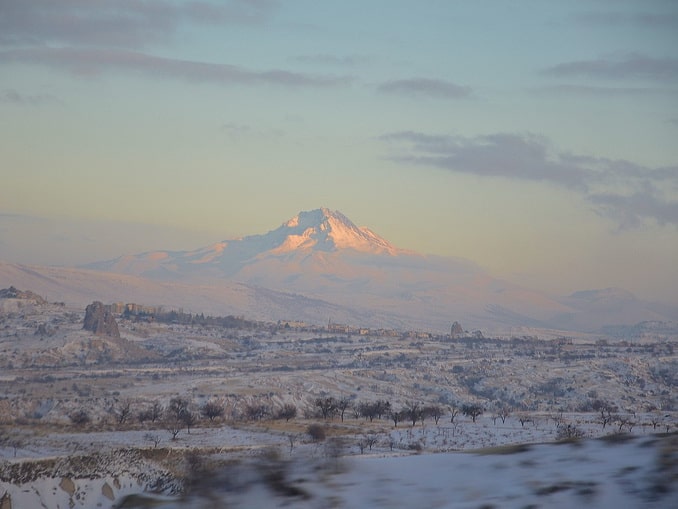 Which will include not only climbing to sky-high heights on a hot air balloon (note that the flight can be canceled due to strong winds). But also visiting underground cities: the most popular of them are Derinkuyu and Kaymakli.

In the Meskendir Valley you will enjoy the scenery. And in the one named Devrent, let your imagination run wild.

The Red Valley sheltered the natural houses of the gnomes. And Pink – is famous for its rocks of exceptionally delicate shades. They look especially beautiful at dawn.

Near Göreme there is an Open Air Museum, by visiting which you will basically learn everything you need about the early Christian themes in these parts. And do not spend a lot of energy on this – the churches are located quite compactly.

By the way, there are two Valleys of Love in the vicinity of Göreme. One is located south of the geographical center of Cappadocia. And the other, the most famous, is to the northwest, the Balydere gorge.

Following the Pigeon Valley, you will reach Uchisar and its castle. But it’s better not to walk to Pashabag, the shelter of most of the “fairy chimneys”. You will arrive in Cappadocia in early January or, say, in May – the distance is too great.

The same applies to Zelva. And, of course, to the Ihlara Valley. After all, it is
about 40 km from Göreme along the highway!

To fans of downhill skiing we will advice to spend a day or two on the slopes of the popular resort of Erciyes. After all, it can be reached from Göreme in just 1.5 hours!

Turkey in October: is it worth going and where exactly? Weather, water temperature, is it possible to swim? Hotel prices 2022, how much costs excursions and car rental? What to do in Turkey in the […]

How to Rent a Car in Spain

Car rental in Spain: what do you need to know? What documents required, deposit, insurance, deductible, prices 2023. Is it possible to rent a car in Spain without a deposit, current rules and penalties – […]