Venice in May – is it worth the trip? Weather, air temperature, hotel prices in 2023, are there many tourists? What to do in Venice at the end of spring, where to go in the vicinity – in the material by good Time for Trip.

If Paris in early May is considered unconditionally the “right” destination for a romantic trip, then Venice is not so simple. On the one hand, you need to go – the “City of canals” often bathed in fogs looks tempting even in November. On the other hand, doubt still torments the soul.

Still, the sea, the lagoon, a lot of water? And because – what is there with precipitation and humidity?

Will the heavy rains start in Venice in the beginning of May? Don’t you have to regularly fork out for disposable plastic over the knee boots? And then wander knee-deep in water, looking at the palazzo under the tight jets of vigorous spring rain?

What are the air temperatures: both during the day and at night. And finally, how crowded is Venice in May?

The answer to these questions is of interest to many. It is no coincidence that a considerable number of grandiosely conceived and promising trips to the “City on the Water” were spoiled by the local climate.

Let’s not argue – sometimes it’s even nice to get caught in the rain. But what if it goes on for several days? And the water covers not only sidewalks – it presses on the first floors of buildings? 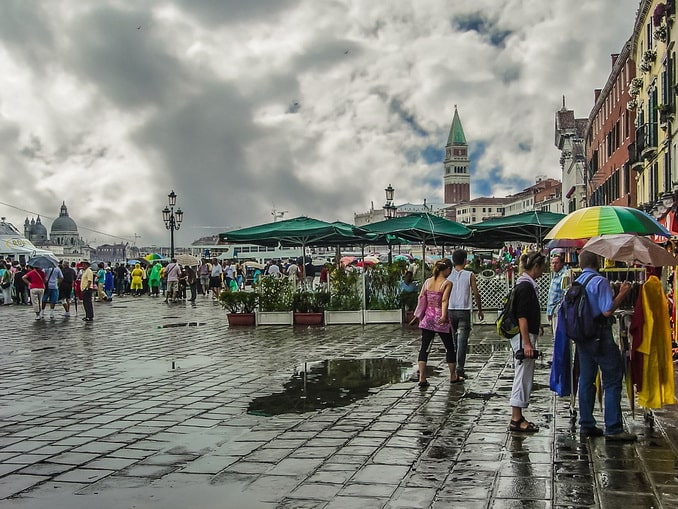 Weather in Venice in May

Alas, we cannot definitely reassure travelers – the end of spring here is warm, but damp. According to long-term statistics, the amount of precipitation in early May in Venice exceeds most other periods of the year. Definitely second only to the clear champion – November!

However, this is not a judgment. And it is unlikely to have a decisive impact on your plans for visiting the main attractions of Venice.

At least because the local weather is considered capricious? And it is not inclined to reckon with the feelings and even more so the expectations of tourists.

Are you waiting for rain? And there will be sun and cloudless skies! Dry weather expected? This is another reason to stock up on a raincoat and rubber boots.

Year after year is not necessary, and there is evidence of this. For example, even in early November in Venice, amazingly dry and warm weather can stand for several days. And only then it begins to drip from the sky, and then pour.

The average number of rainy days per month is 8-10. The norm of precipitation – about 100-110 mm – can frighten a person who does not know the nuances of the local climate.

Is it worth taking an umbrella with you? At the end of spring, such an accessory in Venice will certainly be in demand. And there is nowhere to buy it locally!

The weather in Venice in early May cannot be called hot. But it does not cause any complaints from the point of view of low air temperatures.

From +17-+20 degrees on International Workers’ Day and adjacent dates, to +24-+28 towards the end of the month. Almost subtropical, right?

Temperature dips, of course, happen – how without them? But below +15 usually does not happen, except perhaps in the dead of midnight.

Moreover, at the end of spring the water temperature in the Venetian lagoon reaches +22-23 degrees Celsius. That means you can swim!

Moreover, for the practical implementation of this idea in practice, you do not need to travel too far. After all, the reverse side of the Lido island, the one that faces the Adriatic Sea, has wide sandy beaches!

Despite the ambiguity of the weather and often heavy rainfall, the number of tourists who choose May for their trip to Venice is traditionally large. Which leads not only to pandemonium on the streets, but also to the rise in prices in hotels. As well as the actual absence of interesting offers already in April.

Therefore, if you plan your trip for this period, you should take care of it in advance. And book inexpensive and well-located places no later than in February!

We recommend paying special attention to the Cannaregio area, adjacent to the station. And San Polo, which occupies a vast piece of land on the other side of the Grand Canal.

Hotels in these locations are usually somewhat cheaper than those in San Marco. And the number of cafes where you can taste the best pizza in Italy is almost more!

Look at casettaveneziana 02704, which is a stone’s throw from the station and overlooking the Grand Canal. Given the price – 110-120 € per night for two – this is a great offer!

For about the same amount, you can rent a Casa dea corte apartment in Cannaregio. Comfortable and clean apartment of 35 m2 with a convenient location. From here you can walk to Piazzale Roma in 5 minutes, a walk to San Marco will last a maximum of 15.

We wrote about possible routes for walking around the “City of Canals” in a separate article. To repeat is to waste your time.

Therefore, we will simply give some tips that allow you to plan your trip correctly. And save money too!

The cost of ONE vaporetto trip is beyond reasonable: 7.5 €. But buying a travel card for 1, 3, 7 days allows you to save a significant amount of money.

Even more for kids and their parents: ask to issue a paper called Rolling Venice at the box office on the pier (you will need a passport).

The city’s tourist card, the Venezia Unica City Pass, will give you free access to some museums and temples. But you should know that the entrance to many churches in Venice is absolutely free!

For example, they don’t take money for visiting the Basilica of San Marco and San Giorgio Maggiore. You only need to pay for climbing to the next tier or to the bell tower!

The famous Frari in the area of ​​San Polo and Il Redentore on Giudecca, however, are allowed inside only for a fee of 3 €.

The Doge’s Palace does not advertise the discount on the website. But in fact, it allows families with at least one child to pay for admission at children’s rates (13 instead of 20 €).

By the way, tickets make it possible to see not only the famous palazzo, but also visit the Carrer Museum. He lives in the building of the former royal palace, rebuilt, by the way, by Napoleon. In the middle of the 19th century, the notorious Sisi, Empress of Austria, looked at the Grand Canal from its windows. 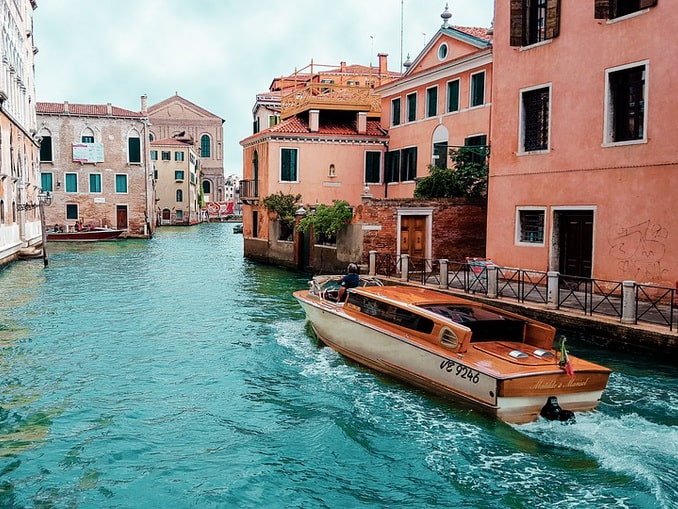 Where to Go Outside

If the duration of the trip allows, we advise you to see Verona. And spend at least 1 day exploring the many attractions there. After all, it’s right to go and see Juliet’s House (not real) and the residence (original) of the family of her beloved Romeo in May in the air.

Should you visit Lake Garda? This idea looks good!

Especially at a time when nature is dressed in fresh and dazzlingly bright spring outfits.

We will even say more – on the shores of one of the most beautiful lakes in Italy, it is worth lingering. For 2-3 days at least!

You will have wonderful impressions if you pay attention to Vicenza. For some unknown reason, rarely visited by foreigners, but a very beautiful Italian city.

“Little Venice” Treviso and Padua are on our list of interesting destinations near. On a bad weather day, you can go further south to Ferrara. After all, you need to see the local castle, the residence of d’Este, at least once in your life!

Venice in September – is it worth going? Weather, how to dress, water temperature, prices 2023. What to do in Venice in early autumn, where to go outside the city – in the review of […]

Venice in November – is it worth going? Weather, air temperature, how to dress, prices 2023. What to do in Venice at the end of autumn, where to go outside – in the good Time […]