рParis in December – is it worth going? Weather, how to dress, prices of hotels rooms and tours in 2022. What to do in Paris at Christmas and before, where to go outside the city – found out goodTimeforTrip/

When it comes to traveling around Europe, few people consider December as the right time for this. Is that its very edge – the eve and Christmas itself.

It used to be so… Today, the situation has changed! The desire to wander away from the crowd and save on hotels and excursions forces tourists to consider, among other things, previously unpopular periods. Especially when it comes to the most interesting cities in Europe.

However, if the desire to celebrate Christmas in Paris does not require explanation, then the intention to visit the French capital in early December is puzzling. Easy, of course, – today people are so accustomed to inadequate actions that the very border between normal and abnormal has blurred.

“What can be good there when nature itself is crying” – an experienced traveler will ask in puzzlement? However, perhaps he will answer to himself – at least tourists will try not to come.

And therefore, December in Paris is good because the Louvre will be able to visit not in the crowd. It will be possible to walk around the Marais district, without avoiding noisy tour groups, loudly muttering in an incomprehensible language.

And sit on the bank of the Seine, fixing your undisturbed mental gaze on the days of kings and musketeers. And maybe even further – who knows what kind of knowledge you have there?

But first things first. And let’s start with the not so pleasant! To end with what is remembered best.

Weather in Paris in December

It’s actually not as bad as the guidebooks make it out to be. Since the air temperature even at night almost never drops below 0 °C. During the day, the city atmosphere warms up to commendable +8-12 °C.

Note that similar and even higher air temperatures are possible in Paris not only in the beginning of the December, which at this latitude can be considered something like the end of autumn! But even at its end – in 2021, on the eve of the New Year, the guests of the French capital listened with surprise to the forecasts that promised almost spring warmth – up to +14-15 °C!

At the same time, it is almost always quite damp – according to statistics, this month is the most rainy of the year. However, remember another European city that does not have similar problems at the end of the year. Yes, the same Venice in early December, if it does not float, then bathes in mists!

Heavy rains – rare guests in Paris in the start of the winter , but long and indistinct – happen regularly. The sun, however, also appears in the sky!

According to statistics, during 25% of the days in December 2021, the streets of Paris saw the sun’s rays. Winds, however, permeate anyone who opted for a light jacket and neglected a down jacket or coat.

A scarf is not just a tribute to fashion, but an important part of the wardrobe. Many will be happy with a hat on their heads (kids especially) – walks along the Parisian embankments at the end of the year require perseverance and the ability to endure the vagaries of nature. Not only a romantic warehouse of nature!

There are almost no serious water rises in the Seine in December. But in January, Paris every year awaits with trepidation the repetition of the Great Flood of 1910.

And big floods do happen! Although, fortunately, not yet the scale of the national disaster.

The damp and dank weather that is a common backdrop for Paris in both early and late December requires adequate insulation. So that you can wander along the banks of the Seine or climb the top tier of the Eiffel Tower without fear of hypothermia.

The main thing is to stock up on water-repellent clothing and waterproof shoes. At the same time, it is better not to take excessively warm jackets with you – lined windbreakers and raincoats in the company of sweaters are ideal.

In most cases, rubber boots will also come in handy. But if you arrive in the winter in the “Capital of the World” in boots with thick enough soles, you are also unlikely to regret it. The main thing is that they do not get wet!

In described time direction as a whole is not considered immensely popular. And this is understandable – there are not many people who want to go on a trip to the French capital just a couple of weeks before the New Year.

Therefore, by planning an independent trip to Paris in yhe first half of December, you get a chance to save money. Since air tickets at this time cost minimal amounts. There will be no shortage of decent hotels at a reasonable price.

For example, the CMG-Magnifique appartement III Bastille Voltaire in the 11th arrondissement will host two travelers for less than 100 € per day. A great price for a studio with a separate kitchen where you can serve yourself an excellent French-style breakfast?!

Somewhat pricey, but it flaunts an excellent location in the Latin Quarter of the Hotel Abbatial Saint Germain. Which is also praised for the cleanliness of the rooms and comfortable beds.

Note that if you take care of booking 5-6 months before the trip, you will be able to find cheaper accommodation!

As for excursions, an hour-long boat trip along the Seine will cost only 15 € per person. From 27 € cost walking sightseeing tour of Paris, from 35 € – day ticket for hop-on hop-off bus.

About what top attractions of Paris you need to see first of all, we wrote in detail in the corresponding article. But if you have a little more time than the standard 3-4 days, then plan a much more interesting and varied program.

For example, visit not only the Louvre, but also some other interesting museums in Paris. Stand in line and climb the Eiffel Tower, and then appreciate the city’s vistas from the observation deck of the Monaparnasse skyscraper.

See if Notre Dame is being restored after the fire and look into the royal Sainte-Chapelle. Walk through the famous Marais, then cross to the other side of the Seine and take a walk in the Latin Quarter. 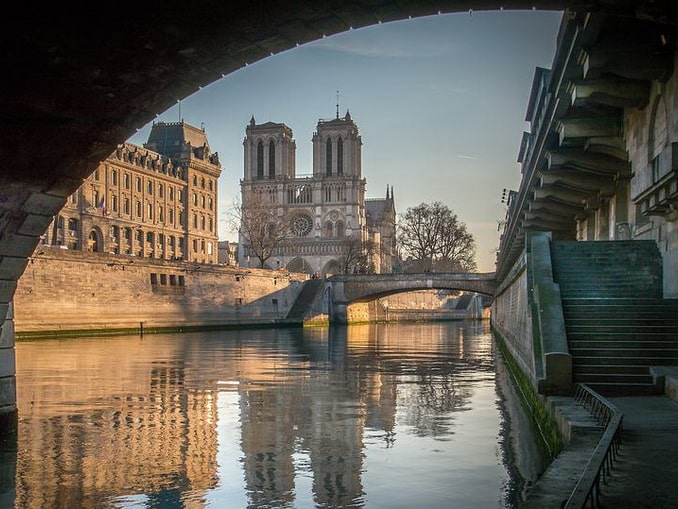 Breathe in the creative atmosphere that gave inspiration to many great quarters of Montmartre. And sit for a long time at the foot of the Basilica of Sacré Coeur, trying to see the outlines of the great city through the veil of December fog.

Of course, this is not all that could be done here in winter. For from Paris you can go not only to Versailles – the number of castles in the vicinity of the capital of France (both near and far) is quite large.

And you can visit, for example, the former estate of the Princes of Conde in Chantilly. And then the main royal hunting residence, the Palace of Fontainebleau. After all, in December they are open to visitors!

We recommend you extend your attention to other interesting places in France, which can be easily reached from Paris by car or public transport.

Take a day trip to Normandy. For example, pay a visit to the amazingly beautiful city of Rouen, whose cathedral incredibly impressed Claude Monet. And then go further – to Mont-Saint-Michel, one of the main attractions of France.

A rather captivating pastime option even in winter is a visit to the castles in the Loire Valley. After all, such brilliant, famous residences as Chambord and Chenonceau are visited by very rare travelers at this time. And, therefore, you can enjoy the rare architectural beauty without being disturbed (almost) by anyone!