What to see in Cyprus on your own or with a tour? The main attractions, available entertainment: description and photo, prices 2022. What to visit in Paphos and Larnaca, Limassol and Ayia Napa, where to go with children – in the article of good Time to Trip.

Cyprus is a small island. However, it is located in a strategic location. And it has always been an object of attraction for the peoples living on the Mediterranean coast. True, not only them – its shores have seen many historical figures, the same Richard the Lionheart.

Phoenicians and Persians, Greeks and Romans, Crusaders and British owned this piece of land. And, of course, left something for the memory of posterity.

Of course, nature itself has tried. As how could it stay away on such an advantageous piece of land?

Therefore, in general, the list of interesting places worth seeing in Cyprus inspires respect. At the same time, however, something like despair can visit you.

After all, there are practically no chances to see everything during a weekly or even ten-day stay in Cyprus. Even if you refuse a beach holiday, rent a car right at the airport and start driving around the island like crazy!

By the way, very few people do this. And mainly during periods when the heat subsides significantly – for example, in September, the weather in Cyprus contributes to excursion activity much more than in July.

However, the established way of life of the “Island of Aphrodite” is conducive to a leisurely, measured pastime. And it is not customary to rush here – at any time of the year!

But let’s get to the point! Slightly non-European, laying the inspection route counterclockwise. But what can you do if the most interesting places in the Republic of Cyprus are located in its western and southern parts?!

By the way, sometimes you have to walk and climb a lot. Therefore, be sure to put comfortable shoes in your suitcase that sufficiently fix the foot. In order not to inadvertently tuck it on the next stone! 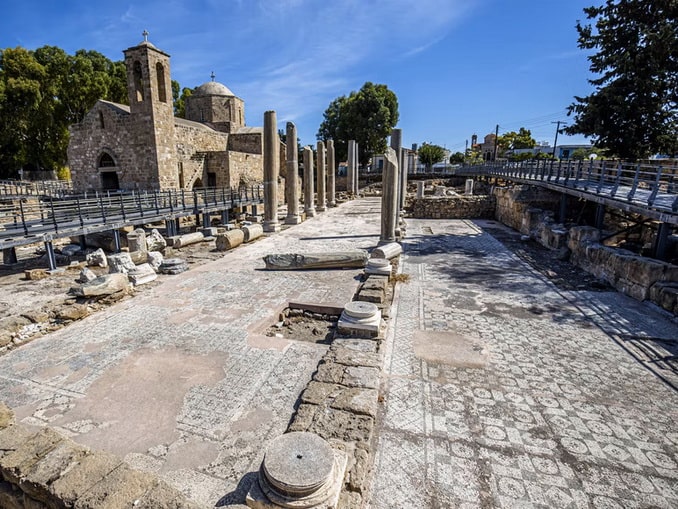 Perhaps it is the most intriguing city in Cyprus from the point of view of a foreign tourist. Since the Archaeological Park of Paphos tops the list of the main attractions of the island. And not only from our absolutely unscientific point of view!

The park is located on the site of an ancient Roman cottage settlement for the rich and famous residents. Scientists have unearthed enough fragments of columns and even a well-preserved amphitheater. The pearl of the park is considered to be of excellent quality ancient Roman mosaics.

A savvy guide will tell a series of stories as he leads tourists through the ruins. An independent visit will save money, but is unlikely to give vivid impressions. Since the stones themselves can tell little to a person who is poorly versed in the history of the place.

Not far from the Archaeological Park is another well-known attraction of the city – the Royal Tombs. However, not everyone likes the places aura – rich dignitaries were buried here during the Ptolemaic dynasty.

Detailed information about opening hours and prices can be found on the official website of the park.

The source that beats in the grotto of St. Solomon (we are going towards Kato Paphos), as they say, is miraculous. And especially helps with eye diseases.

And at the column that stands near the church of Ayia-Kiriyaki or Panagia Chrysopolitissa, according to legend, they beat the Apostle Paul with whips. Which arrived at the island to convert the inhabitants to Christianity.

We recommend also walking to Ktima – even if you came here for just a day. Preserving the charm of the ancient part of Paphos, it is located on a hill away from the built-up hotel of the seaside town.

Where to go with children

There is the Aphrodite Water Park in Paphos. Small but very cozy: green and with enough shady space. So you don’t get sunstroke even in high season.

Prices for entrance by the standards of Cyprus are quite democratic. Only 31 € is a ticket for a day and 47 € – for two!

Of those apartments that can be considered relatively inexpensive, we highlight the Artemis Cynthia Complex in Kato Paphos. Cozy flat with fresh renovation, fully equipped with everything you need, in June it cost less than 50 € per night.

In the reviews, they notice that the staff is very prudent – there are even adapters for sockets in the rooms.

By the way, this is important! After all, Cyprus inherited British rosettes (type G) with three flat slotted ones. And tourists who come here on vacation, say, from the USA or Canada, Germany or France, simply do not understand how to charge their laptops and phones.

Where to go outside

Halfway from Paphos to Limassol, on the coast is the village of Kouklia.  The iconic sight of Cyprus, Aphrodite’s Rock or Petra tou Romiu, are based near it. A distance of 20 kilometers along the highway is easy to overcome in a rented car.

It was here, according to legend, that the Greek goddess of love decided to go ashore. A little further away, in Kouklia itself, a sanctuary dedicated to Aphrodite has been preserved.

In the Troodos mountains east of Paphos is the rich Orthodox monastery of Kykkos. It is quite possible to visit it on your own – if you rent a car.

In general, there are many interesting places in Troodos – the same villages of Pedulas and Mutulas, Kakopetria. Therefore, in order to guarantee and comfortably see several, and not one sights in a day, it is better to enlist the help of a guide. Moreover, 40-50 € for an 8-hour excursion in a minibus is an absolutely normal price.

The Blue Lagoon at the base of the Akamas peninsula north of Paphos is a must-see place when vacationing in Cyprus. What is there – people dive into its crystal waters with pleasure directly from the boats!

In general, the Akamas National Park is the place where you need to spend at least a day. At the same time, it is not necessary to walk along it – for the convenience of movement, you can rent an ATV.

The path and the grotto of Aphrodite, the Avakos gorge, the actually wild Lara beach and stunning views of the sea from the coastal cliffs – Akamas is a must to visit! 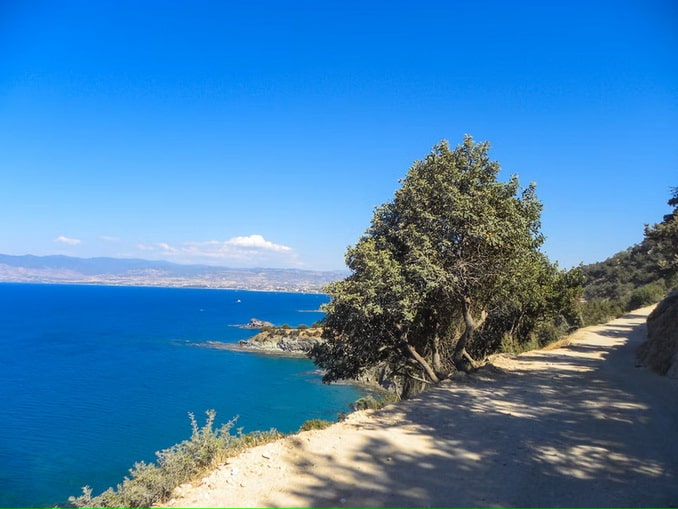 A major tourist center on the south coast is only 65 km from Paphos. And it has a lot of places that can awaken the curiosity of vacationers.

Let’s start with the fact that it was in the area of ​​the Limassol fortress that the famous English king Richard the Lionheart beat off his bride, Berengaria of Navarre, from the local emperor. Then he married her and continued his crusade.

Berengaria, by the way, is famous in her own way. After all, she is the only queen of England who has never set foot on the land of her kingdom!

Limassol Castle with the Museum of the Middle Ages and the Archaeological Museum are the most interesting attractions of the Cypriot resort. Time-strapped vacationers should also enjoy an informal tour of the city.

Tourists with children are shown a visit to the Fasouri Watermania water park, the largest on the island. The reviews indicate that “the park is excellent” and is suitable for children of all ages.

Lovers of antiquities should definitely pay attention to the surroundings of Limassol. After all, there are the ruins of two ancient cities at once:

Curion is better preserved. And that is why we recommend visiting it in the first place. The ruins are located 20 km west of Lemesos, near the village of Episkopi.

For a ticket, you will have to pay the standard tax here: 4.5 €. By the way, you can swim nearby.

Amathus is worse preserved. After all, the British took a significant part of the ancient artifacts found here to their homeland. And now they are on display at the British Museum in London.

To view the surviving fragments of Amathus, you should drive from Limassol in the direction of the village of Agios Tychonas.

Near the city rises the castle of Kolossi, built by the Knights Hospitaller. We recommend visiting the village of Lefkara, which is located in the foothills to the west of the resort.

For it has been famous all over Europe since ancient times for its skilled weavers. Lace was woven here of such a quality that it was envied in the French Valence. It was not for nothing that Leonardo ordered fabrics for the drapery of the altar of the Milan Cathedral here.

Not full of attractions, but the most inexpensive resort in Cyprus. There are frankly few places of application of tourist interest. Is that a fortress, the church of St. Lazarus and an archaeological excavation on the site of the ancient settlement of Kition. Oh sorry, we forgot about the main local boulevard, the famous Finikoudes!

Quite a well-known place is Kiti, ten kilometers from Larnaca. Indeed, according to legend, the archangels Michael and Gabriel took part in the construction of the local church of Panagia Angeloktisti. Inside the temple is decorated with beautiful Byzantine mosaics.

For divers, Larnaca will offer a particularly tasty “dish”: dives to the Zenobia ferry that sank in the 80s of the last century. By the way, the ship capsized during its first voyage!

Travelers rare come to see the capital of Cyprus, because it is not located on the coast. But those who take the risk will not regret the time spent.

Indeed, in addition to excellent museums: National, Ethnographic and Byzantine, in Nicosia you can also see the original old quarter of Laiki Geitonia. Renovated, but completely retaining the charming historical aura.

The iconic landmark of these beach resorts is Cape Greco with its bizarre arches and underwater caves. A beautiful place and literally a paradise for divers of all stripes!

The beaches of Ayia Napa are clean and beautiful. But not everyone will like to swim there – it is too shallow.

In order to enter at least waist-deep, adults will have to walk 30 meters from the shore. And the water here during the season warms up to unimaginable values ​​- almost +30 degrees Celsius! 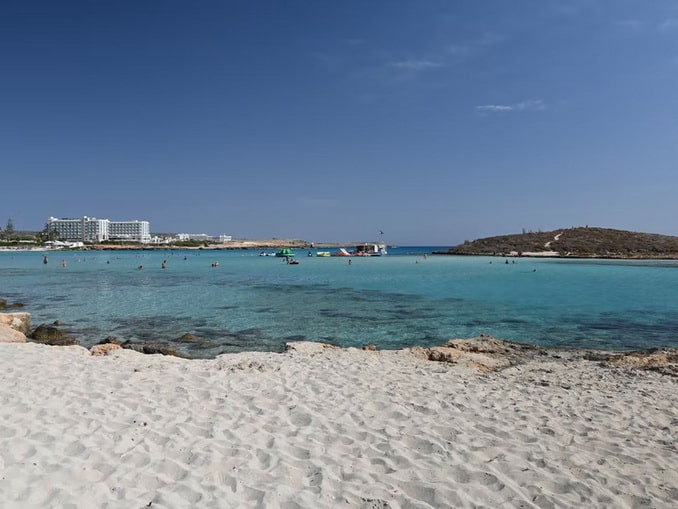 But the town is considered one of the best purely resort destinations of the island. And in addition, it’s an excellent starting point for a visit to the Turkish part of Cyprus.

Of course, it is better to go there with a guide who knows the local realities. But having mastered the path once, you understand that crossing the state border here is a matter of 5 minutes.

The main attractions of the region: the ancient city of Salamis and the buildings of the Venetian era in Famagusta. For those who are not afraid of the ghosts of the relatively recent past, a tour of the city of Varosha with abandoned hotels from the pre-Turkish era is shown.

The virgin sandy beaches of the Carpathian peninsula are beautiful, where sea turtles still feel like masters. Guaranteed to charm the traveler and immersed in the orange gardens of Girne-Kyrenia.