Paris in February – is it worth visiting? Weather, air temperature, how to dress, prices 2023. What to do in Paris at the end of winter, what sights to visit in the vicinity – found out goodTimeforTrip.

It is unlikely that anyone will dare to seriously challenge the thesis that February is not suitable for traveling around Europe. We do not mean purely ski entertainment somewhere in the Alps – only talking about sightseeing tours and trips.

The reason for such attitude lies on the surface – unstable, and often just bad weather, is hardly conducive to long walks in the open air. As well, it can easily make critical changes to plans – few will agree to inspect even the famous attractions in heavy rain or snow.

However, in some cases this is good – a small number of tourists around! Because this alone is able to block all other inconveniences in general. That is why February in Paris, from our point of view, is one of the best months of the year.

After all, it allows active and unwilling travelers to turn around with might and main. And at the same time, do not go broke – even a primary school student knows today that Parisian hotels charge too much for accommodation during the season.

Will the weather in February allow you to see all the interesting places in Paris and go somewhere from the capital of France? This is what we intend to explore in detail in this article. Along the way, clarifying the question of what kind of clothing in this period of the year is the most “correct”.

Weather in Paris in February

Not so much cold as chilly. The air oozes dampness, and therefore a lightly dressed person will probably not want to take part in long walks. Especially when it comes to a (many) hour cruise on the Seine!

In February 2022, the air temperature in Paris during the day rarely dropped below +8-10 °C. And in the middle of the month, even made an attempt to climb the peak around +15 °C.

At night, it was colder. But temperatures around +3-6 °C prevailed. And thermometers, it seems, have never even thought about falling to zero.

It didn’t rain very often, but sometimes it did it thoroughly. So much so that tourists praised themselves for foresight, opening the umbrellas they had taken.

Approximately similar weather is in Paris every February. Although, of course, there may be exceptions – in other years frosts are recorded even during the day. Not for the entire month, but you should keep the possibility of such an event in mind.

It cannot be said that the winds at this time of the year behave somehow especially unbridled. But against the background of constantly high humidity, you have a chance to feel discomfort.

Especially when walking along the banks of the Seine. Or if, for example, you are planning to travel from Paris to Normandy, on the coast of the English Channel.

At the same time, cloudy, but dry, and even sunny days in the French capital in the last month of winter make up the vast majority. And therefore, you will realize most of your plans for visiting the main attractions of Paris.
Moreover, you will not have so many competitors. And if you plan to see the most popular places like the Louvre and the Eiffel Tower, the Palace of Versailles and other best museums in Paris on a weekday, you can completely avoid standing in long lines.

With one, perhaps, exception. On Valentine’s Day, namely February 14, Paris, as it should be, becomes the world capital of all lovers. And such undoubtedly romantic places as the panoramic platforms of the Eiffel Tower are overflowing.

So, as if you were going to go in the winter by no means to warm climes and have reason to expect sharp cold snaps. Therefore, it is worth considering in your wardrobe not only a coat or an insulated jacket, but also a certain supply of sweaters and sweatshirts.

Be sure to take at least one extra pair of shoes with you to replace the one that can get wet. And if possible, then in general – rubber boots.

Have an excellent chance to come in handy umbrellas and raincoats. Children and easily freezing adults will also benefit from hats and scarves, as well as gloves.

Believe us, both the first and second, and even the third, can be very appropriate if you take part in a long walking tour. Or spend a considerable amount of time at a windswept altitude. Like the same hill of Montmartre, on which rises the famous Sacré-Coeur Basilica.

If you want to treat yourself and stay almost in the center of the city, for example, in the 10th district, then you need to have in your wallet around 90-100 € per day. And even for this amount, you can choose from not too many good options.

We recommend paying attention to a separate loft cosi apartment, which literally just appeared on Booking. Because it’s clean, freshly refurbished and… inexpensive!

If you do not get hung up on the proximity to the main attractions, the choice will expand. But the price will not fall – about 100 € per night – standart price.

In any case, in objects that have reason not to temper their appetites. That is, having a customer rating of 8.5 or higher.

Like, for example, the cozy studio Odalys City Paris Montmartre. Which is located very close to the Sacré-Coeur and about half an hour from the Louvre and the Opéra Garnier.

Inexpensive and Studio calme et éclairé à 1O min à pied de Nation in the 20th arrondissement. Yes, it’s almost like the outskirts. But you can get to everything interesting by transport very quickly!

A short cruise on the Seine will cost you 16 €, and a 1-day ticket to Disneyland will cost just over 50€. Paying 25-27€ you can go down to the famous Parisian catacombs. Yes, not alone – in the company with an audio guide!

A ticket to the Versailles palace and park will cost 20 €. A tour of the brilliant residence of the French kings with real giude costs about 52-55 €.

If you have a rough idea of ​​how many interesting things there are in the French capital and its vicinity, then, of course, you will develop an extremely rich travel route. Including, by the way, not only well-known sights, but also, for example, French chateaus, which rarely see foreign guests. Especially – in winter.

The same, for example, Malmaison. Or Fontainebleau, easily fading against the backdrop of nearby Disneyland. No, we understand that this hunting palace was intended to live in some shade, but not to the same extent?! 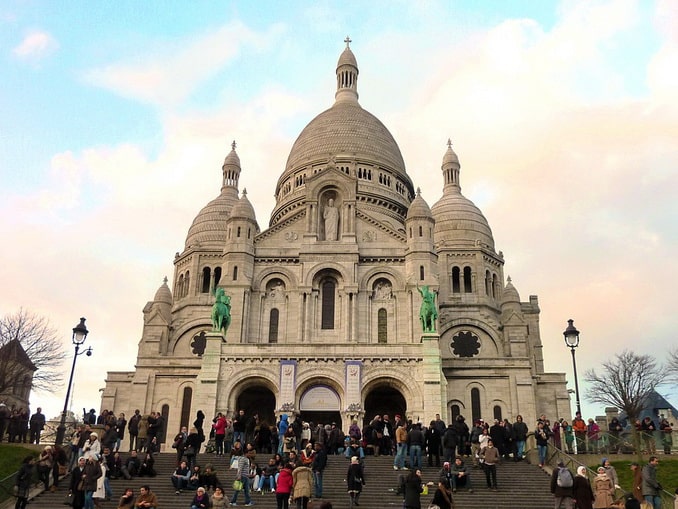 Even those who have been to Paris before will certainly want to visit the Louvre a second or third time. Why not, if it doesn’t involve a long wait? Only (almost) at your service will be the Musee d’Orsay and Marmotan-Monet, Pompidou and Jacquemart-André.

You will hardly get bored walking along the islands and streets, the Marais and the Latin Quarter, Montmartre. Almost certainly there will be a need to sit for a long time on the banks of the Seine, trying to understand why this city penetrates so deeply and firmly into the soul.

Eiffel Tower? We are sure that any trip to Paris will not do without climbing it, even in February!

Surely the Versailles residence will receive “its” visitors. Someone will almost certainly get to Chantilly. Why not – with its collection of classical paintings, this palace will yield only to the Louvre.

Lovers of all sorts of historical places will not fail to get to Mont Saint-Michel and the city of Rouen in Normandy. After all, the latter is known not only as the place where they dealt with the symbol of France, Joan of Arc, but also for its stunning beauty of the Gothic cathedral. Also, in Rouen, a lot of houses in the collomage style have been perfectly preserved.

There is no problem getting from Paris to Strasbourg. A city also of great artistic value with a cathedral and an entire block commonly known simply as Petite France. On the way you have to spend less than 2 hours!

We definitely recommend visiting the Loire Valley from Paris even in February. Not necessarily Chambord – you can visit much less famous castles.

Like the one that adorns Blois. Or the residence in Amboise, which regularly saw not only King Francis I, but also the great Leonardo da Vinci.

Travelers who have more time than the standard 3-4 days, should get to Lyon, the culinary capital of France. Or (and) maybe visit Nice??

Why not – the Cote d’Azur is the very first in the country to meet spring. And already at the end of winter pleases everyone with its undoubted signs!