Sicily in May – is it worth going? Weather, water temperature, is it possible to swim? Reviews of tourists, hotel prices 2023. What to do and to see in Sicily at the end of spring – in the review of good Time for Trip.

Sicily is the main island of Italy. Not only because of the size – many people consider it an extremely interesting place. With a lot of really interesting and even unique sights!

Do you speak Sardinia? Today it has become too glamorous and overly beachy. Because self-sufficient and well-to-do tourists have found a destination suitable for overspending.

Naturally, the local population adapted. First of all, in terms of prices – Sardinian hotels are expensive even in the off-season.

On the contrary, Sicily is still provincial and patriarchal. It firmly stands with one foot in the past and looks at the present with distrust – there is nothing to say about the man-made future and space.

And the island has a lot of fascinating sights and interesting traditions. By the way, the last ones have little in common with the well-known customs of Italy.

It is well known that Sicily is considered not the safest place in Europe – the glory of the “homeland of the mafia” scares people. Although not so fearful ones, on the contrary, are happy to go to see Corleone, the real-life homeland of the fictional “Godfather”.

In fact, the main problem of modern Sicily is bad roads. However, there is an opinion that they are specially supported in this state. So that the money for repairs goes you know where.

Still fit? Then let’s go – we say to those who can afford to relax in Sicily at the end of spring. Obviously not as well-known and promoted tourist destination as the same Turkish Bodrum or Greek island Rhodes. But not in the least suffering because of this! 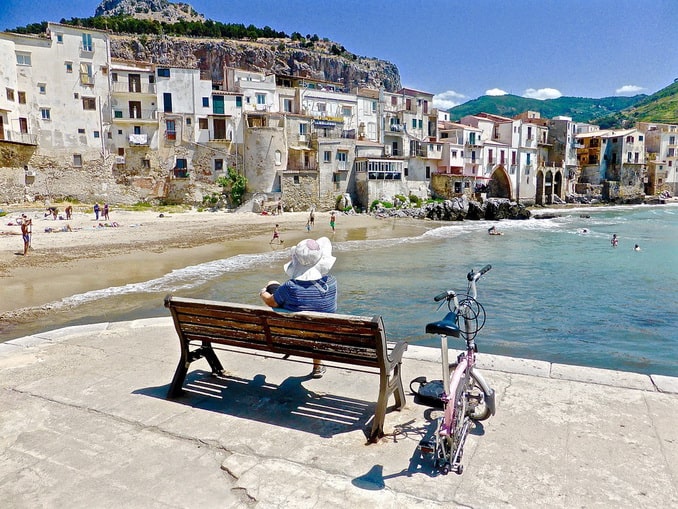 Weather in Sicily in May

Lots of sun, little rain. Although the air temperature does not allow us to talk about the onset of the high season.

The locals will even say that in early May the weather in Sicily is quite cool. And they will be right about something: the air temperature hardly reaches + 22-24 ° C during the day. And it falls into obvious pessimism – not higher than + 15-16 ° C – at night.

Precipitation, however, is unlikely. Cloudy days are also rare – the end of spring here is distinguished by predominantly clear weather.

So take sun cream and other practical things with you – they will come in handy on this sea!

By the middle and end of May, the atmosphere in Sicily warms up to + 26-30 degrees by noon. In the evenings it diligently gets colder up to + 18-20 ° C – the vacationers need to take a breath a little.

Therefore, some warm thing in your luggage will not be superfluous. But you don’t need to stuff suitcase with sweaters! Unless you decide to climb Mount Etna in the wee hours.

It is much more practical to come here with a half-empty suitcase. After all, you can bring home from Italy not only souvenirs!

Note, that rain on the island at the end of spring is very moderate. And as if reluctantly: it will drip a little (at night), and by morning there will be no trace left.

Judging by the reviews, few people visiting Sicily in early May are going to swim. Which is understandable – the Mediterranean Sea is warmed up to only + 16-18 ° C.

A German tourist, of course, will only smile – the North Sea is not warmer in summer either. Do not fail to swim in such conditions and the Scandinavian, as well as the British. But someone, of course, will expect more.

Moreover, by the middle of the month, the swimming season is gradually coming into its own. The beaches of Mondello and Cefalu, San Vito lo Capo, Taormina are gradually filled with tourists.

In the coastal waters, warming up to + 20-22, even a doubtful vacationer begins to timidly enter. Naturally, it is best to do this after dinner. But not later than 5-6 pm.

Are you used to planning vacation by your own? In our case, this is the right choice!

Indeed, at the dawn of the beach season, prices in Sicilian hotels do not make you puff, complaining about the incredible high cost.

From 60-70 € is a room in a good family hotel in the popular Taormina or on the coast near it. And this is not only normal, but even inexpensive!

Pay attention to the family Hotel Natalina, whose rooms and breakfasts are clearly more than 2 stars.

Hotel Villa Nettuno must be recognized as an atmospheric place with excellent breakfasts and excellent views. Although it is located far from the coast, it is praised in the reviews. The funicular allows you not to get tired.

Check out B&B La Terrazza Sul Mare Taormina, which offers wonderful sea views from its terrace. And, by the way, “excellent breakfasts” are included in the price of accommodation.

Panoramic water views from the windows and a private pool tempt would-be vacationers and Hotel Isola Bella. From which to the famous beach, there is nothing to go!

Even if you are aiming mainly at the beach pastime, do not be lazy! Rent a car and visit some of the main attractions of Sicily. Moreover, the May weather not only allows – it contributes to the implementation of such a plan.

Driving around the island is quite easy due to not the densest traffic. Not the best quality of the road – not your sadness!

Travel around the island usually starts from exploring its capital, Palermo. The largest and (possibly) interesting city of the island.

In the reviews you can find complaints about the dirt and the abundance of garbage. And this, alas, is true. But if you make an effort and try not to focus on the negative things, you can have fun.

Because the number of interesting places in Palermo and its environs is quite large. Therefore, you still need to try to meet the day.

However, the guide will help you! The best representatives of this profession organize everything in such a way that you won’t even notice: the day has passed – the consciousness is overflowing with knowledge and impressions.

Be sure to visit Monreale – not to see the cathedral there with colorful frescoes, executed in the Byzantine technique, is simply a crime. In May, it is worth planning a 2-3-day vacation in the seaside town of Cefalu, which is east of Palermo.

Although many at this time leave for San Vito lo Capo. One of the most beautiful seaside resorts in Europe!

Naturally, one should not deliberately ignore the island symbol. After all, everyone knows that the famous volcano Etna is not just located in Sicily! But in principle, it is easily accessible even for non-professional climbers.

A rare tourist will miss the opportunity to test his own nerves and luck by going upstairs. After all, the moutain actually has a restless character: it regularly breathes steam and spits lava. And do it in the most unexpected places!

The easiest way to get to Etna is from Catania: regular AST buses run to the lower cable car station in Rifugio Sapienza. They depart directly from the city center (from the station at Piazza Giovanni XXII). 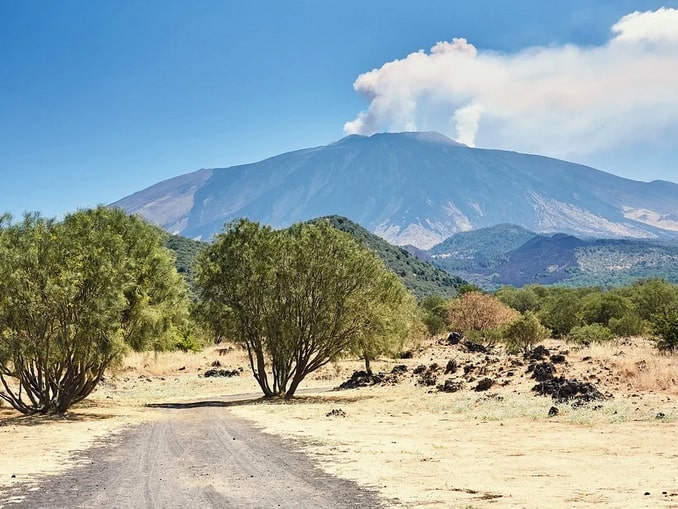 A sightseeing tour of Catania, one of the most colorful local cities, is also able to cut into memory. But the old Messina, alas, was badly damaged by an earthquake at the beginning of the 20th century. And it never recovered!

Syracuse, the birthplace of the great Archimedes, attracts with the ruins of a large Greek city, once the most powerful in Sicily. Tourists are also attracted by the narrow streets of the old town on the island of Ortigia.

Ruins and Staircase of the Turks

The Valley of the Temples in Agrigento is another popular attraction in Sicily (entry ticket online). The remains of as many as SEVEN ancient Greek temples built long before the advent of our era – where else will you see this?

Perhaps in the archaeological park of Selinunte in the province of Trapani. However, few go there: either far away, or they simply don’t know!

You can also get to the Valley of the Temples by public transport. First by train from Palermo and then by bus lines 1, 1/, 2, 2/, 3, 3/ from Agrigento. You can also walk if you are able to master the distance of 6.5 kilometers.

Nearby, near the town of Porto Empedocle, there is an amazingly beautiful seaside cliff – the Staircase of the Turks. You can get there in May by car, but in the summer there is a regular bus.

Modica and Ragusa? They are expressively beautiful and have preserved the authentic buildings of the beginning of the 18th century. But, of course, not every traveler included these places in their program – getting here is not too easy.

Sicily in September: is it worth going and where exactly? Weather, water temperature, is it possible to swim, prices for hotels and excursions 2023. What to do and what to see in Sicily in early […]

Where to Visit in Sicily

What to see in Sicily and where to visit: in a few days or a week? Route, distances, prices for entrance tickets, hotels and excursions 2023. Description of interesting sights in Sicily, where to stay […]

What to Visit in Alanya?

What to see in Alanya on your own in 2023: with or without children, how much do excursions cost? Interesting places in the city and neighborhoods, routes, photos. Where you can visit from Alanya by […]

What to Visit in Murano

What to see in Murano in Venice on your own? Top attractions, how to get there, prices 2023 for Murano glass? Is it worth staying overnight, where to eat – in the review of good […]